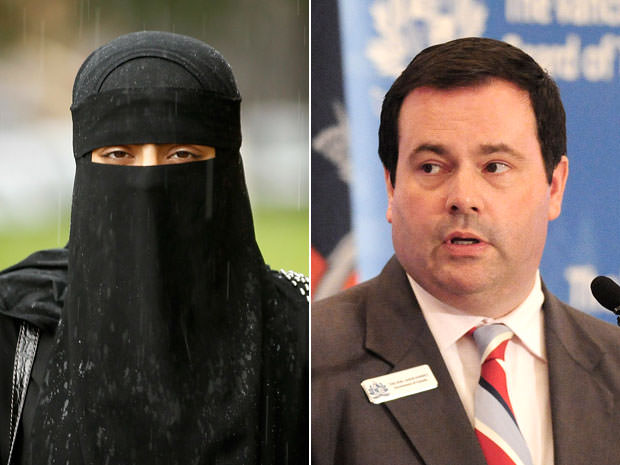 Well, they’ve done it yet again. Niqabi’s have somehow managed to make headlines all across Canada. It’s amazing how much influence this small group of women have on the national psyche. A few weeks ago I mentioned the niqab rage incident in Mississauga. Then there is the on going case of the woman who was sexually assaulted and wants to testify in court with a niqab. This week, the niqab issue was brought up once again.

This time it was Minister of Citizenship and Multiculturalism, Jason Kenny who sparked the controversy. Effective immediately, he announced on Monday, all niqabs are banned from the oath taking citizenship ceremony. Any Muslim woman wishing to become a Canadian citizen must remove the veil during the ceremony he stated. Kenny said that the niqab ‘reflects a certain view about women that we don’t accept in Canada’. 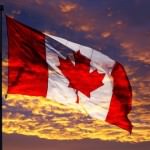 Minister Kenny also clarified that this isn’t just about the judge being able to see and validate the recital of the oath, “This is not simply a practical measure. It is a matter of deep principle that goes to the heart of our identity and our values of openness and equality”. The niqab obviously violates all that we hold sacred in Canada according to Kenny.

So, what was the last time you heard of a woman refusing to take off the niqab before swearing the citizenship oath? Never. How many women even take the oath wearing a niqab? Probably an insignificant number. Neither Mr. Kenny nor his office could provide any statistics to back up the ban they so forcefully implemented. No one knew about this complaint up till this week. Clearly, this wasn’t a problem to begin with.

It is obvious that this ban is yet another sleazy bigoted move by the Conservatives to score political points and gain some short term popularity. And it’s worked quite well. At a time when their government is under heavy criticism due to the mess they created in Attawapiskat, playing the Muslim card is the best way out. Prime Minister Stephen Harper used similar tactics in September when he warned us all that the greatest threat to Canada was ‘Islamicism’ – whatever that is.

Regardless of the motivations behind it, the ban carries many implications. Disallowing the veil at a symbolic event like the citizenship ceremony sends a strong message that the niqab is not welcome in Canada; it certainly flies flat in the face of the tolerant and welcoming society we aim to foster. As the Toronto Star aptly put it, the ban coerces Muslim women to fit into the mainstream – ‘behave and look just like us, or pay the price’. So much for the individualism we value so much. 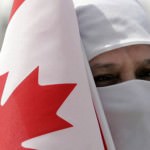 Jason Kenny, like most, believes that he is liberating the niqabi’s from the oppression imposed on them by their husbands and fathers. Reality is thathe is restricting their freedom and engagement with society by disallowing them to become citizens. Perhaps – this is just a wild idea – by allowing them to become citizens, we might have a greater chance of integrating these new comers into our social fabric?

This unnecessary ban impacts a few and is largely political and symbolic; much like the Hérouxville ban on the public stoning of women. In and of itself, I don’t think many niqabi’s would have refused a polite request by the judge to reveal their face in the first place. If validating the oath recital was so important, this requirement could have been easily communicated through a simple memo to the parties concerned.

Making a national spectacle over a non-issue has sparked endless debates on multiculturalism, religious accommodation and Canadian Muslims. It has further helped ‘otherize’ Muslims and has created an ‘us verses them’ dichotomy. You can either be a niqabi or a Canadian – that’s what the ban represents. It’s left some women with the awkward choice between citizenship and religion.

My fear is that measures like these are the stepping stones to full public bans. They help immunize the public to the singling out and marginalization of Muslims. The core arguments used for the niqab could very well be applied to the hijab too – what is to prevent that from being banned next?

Given the unpopularity of niqab within our own community, many Muslims may not feel the need to speak out against this act. But know that these are just the building blocks to greater cuts in our religious freedoms; if we stay silent now, then we’re setting ourselves up for disaster. If you don’t speak up for the niqabi’s, no one will speak up for you.

Guantánamo No More: 10th Anniversary of the Draconian Prison