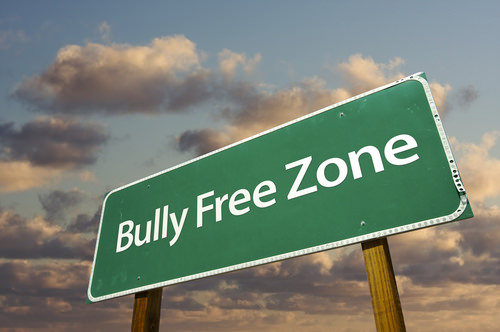 Debate team champion, Autena Torbati, lives by her words. So the day a  debate teammate announced to the class he would have “liked Hitler better if  had he killed all the Muslims, instead of Jews,” Autena’s blood ran cold.  “Remember,” says the Oklahoma high school student, “the Holocaust started  with words before ending in gas chambers.”

In Autena’s case, bullying has been confined to verbal taunts, threatening  gestures, and an anti-Muslim opinion piece in the school newspaper. But for  other Muslim students, verbal assaults have escalated into physical abuse,  as anti-Islamic sentiment sweeps the nation. In Texas, a Muslim student was  brutally beaten and thrown into a dumpster, while in Minnesota, Muslim girls  were chased by classmates who shoved raw pork in their faces. Following  relentless beatings from middle to high school, a Muslim Staten Island teen  finally resigned from school.

Bullying is an equal-opportunity crisis, affecting students of every age,  race, and creed. The dimension that makes the bullying of Muslim students  particularly disturbing centers around the open prejudices and fears of  adults, giving the green light to non-Muslim children that it’s okay — even  patriotic — to discriminate. Muslim students report that an administrator at  one school screamed at a 13-year old to remove her hijab (religious head  scarf) until the girl broke down in tears. A guest speaker at another school  handed out literature demonizing Islam in a social sciences class. When  adults, especially educators, join in the bullying, it’s not only hurtful,  say students, it’s a betrayal of trust. But educators have found that when  just one caring adult supports a student, it can make a world of difference,  creating a positive ripple effect that goes beyond one student and one  classroom.

A Perfect Storm for Bullying

The Council on American-Islamic Relations (CAIR) reports the number of  bullying incidents against Muslim students has spiked in the wake of a  perfect economic and political storm: severe economic distress and  anti-immigrant sentiments, continued wars in Iraq and Afghanistan, the  conflation of Islam with terrorism, even the misidentification of President  Obama’s own religion. Add to the mix the tragic memory of 9/11 and a  proposed Islamic center near Manhattan’s Ground Zero, and you get children,  many just babies on September 11, 2001, indicting their classmates as the  enemy.

How do rising tensions affect the nation’s Muslim students, the majority of  whom attend public schools?  School-related civil rights violations have  increased by 31 percent in just one year, according to a 2009 CAIR study.  The study also found that a student’s ethnicity/ religion, a  “Muslim-sounding name,” or the wearing of hijab were some of the primary  factors triggering discrimination. A separate study by Wayne State  University in Michigan found that 43 percent of Arab-American teens in the  study were depressed.  “Although many Muslim students have good relationships with their non-Muslim  classmates, almost every child I’ve spoken to says they’ve had a hostile  interaction with someone,” says Ibrahim Ramey, Human and Civil Rights  Program Director for the Muslim American Society Freedom Foundation. The  most common epitaphs Muslim students hear, he says, are “Terrorist,” and “Go  back where you came from!” The irony is their tormentors are often insulting  a third-generation American, a scenario painfully familiar to the Omeira  family.

“I raised my son to be a proud American,” declares Abdul Omeira, whose son,  Hashem, changed almost overnight from a sunny-natured 12-year-old to a grim  recluse who stopped eating and socializing and started locking himself in  his room. What his parents didn’t know at the time, says Hashem, a  native-born Californian, is that after his teacher showed a movie widely  criticized for its negative portrayal of Islamic culture, his classmates  started a relentless campaign of abuse — cursing Hashem, his religion, even  his parents.

Thankfully, Hashem’s high school experience is worlds apart from middle  school. The difference? An enlightened school climate, says Hashem. When one  of Hashem’s teachers heard some students categorizing all Muslims as  extremists, he launched into a lesson on Muslim Americans, informing the  class that extremists were a small group who didn’t represent the majority  of Islam’s followers.

How Educators Can Lead the Way

“Some teachers do a wonderful job of teaching acceptance to their students,”  reports Saadia Khan, Civic Outreach Coordinator for the Muslim Public  Affairs Council (MPAC). Kahn is invited to classrooms about a dozen times a  year to talk candidly with students about Islamic culture. “I encourage the  students to ask no-holds-barred questions — whether they’re about terrorism  versus jihad or women’s rights under Islam,” says Khan. It helps to dispel  myths and stereotypes when I can give them accurate information.”

Khan cautions that “misinformation contributes to misconceptions about  groups, which in turn, can lead to bullying.” To help counter the negative  narratives, she says, schools should facilitate conversations among  educators, organizations like MPAC, students, and parents. “We have to teach  children it’s okay to have disagreements as long as you engage in respectful  discussion, and educators can be responsible facilitators of these  discussions,” says Khan, who believes that cultural awareness training for  educators should be required by all school districts. Khan also proposes  using social media as an educational tool to counter cyberbullying,  “Students with blogs can tag each other on positive news items and YouTube  clips. It’s a nuanced and cool mechanism for teaching students how to  exercise free speech responsibly.”

Public school demographics are changing so quickly, say community activists,  cultural misunderstandings are unavoidable. The harassment of Muslim  students, for instance, is often fueled by multiple factors: language and  race, as well as religion, can make students a target. Darker-skinned Somali  students comprise 10 percent of the student population in St. Cloud,  Minnesota. Mocked as “sand n-gers” and “camel jockeys,” they reportedly face  more discrimination there than other Muslim youth. Still other students are  discriminated against because of their perceived ethnicity or religion: many  Sikh Americans, though not  Muslim, are targets of anti-Muslim bias.

Taking the extra steps to educate students about other cultures can ease  cultural tensions and curb bullying, says California teacher Ari Jacobs,  who’s seen the benefits at his own school. (According to one CAIR study,  California leads the nation in the percentage of anti-Muslim civil rights  complaints.)  Jacobs designed a World Issues unit for his 11th-grade  students, examining various aspects of world religions and human behavior,  and a special unit for his seventh-grade social studies class, who explore  bullying and Islamaphobia through the lens of “upstanders versus  bystanders.”

The study of medieval Islam is required curriculum for 7th-grade students,  says Jacobs,  “but ancient history doesn’t allow them to process what they  see on Fox and CNN,” so Jacobs extends the unit to explore current events,  drawing modern-day connections between the curriculum and students’ lives.

Not long after the school year started, Jacob’s class watched news clips of  Florida pastor Terry Jones threatening to burn Qurans on the anniversary of  9/11.  A discussion about the role of book burnings and bystanders during  the Holocaust led to the focal question of the entire lesson. “Are you an  upstander or a bystander?,” Jacobs challenges his students, whom he’s just  shown a 60 Minutes story about a teenager who peered over a bathroom stall  while doing nothing to stop his friend from killing a young child. “I tell  my students at some point in our lives — in a cafeteria line, riding a school  bus, or on Facebook — we’re all peering over that bathroom stall,” with the  power to say, Stop!”

But the most insightful moment for his astonished students, says Jacobs, was  absorbing the tale of Oklahoma bomber Timothy McVeigh. A visibly emotional  Muslim student told her classmates, “This is exactly how we felt about the  people that brought down those planes on 9/11. They don’t represent me or  Islam, just like Timothy McVeigh doesn’t represent all White people or  Christians.” They got it,” says Jacobs. “You could just see the light go  on.”

Jacobs’ students say the lessons they’ve learned have  made them realize that appreciating other cultures requires work and doesn’t  happen on its own. The combination of frank discussion, role playing, and  powerful media images is opening students’ eyes: parents have sent thank-you  letters, and students being picked on have told Jacobs their schoolmates are  no longer silent bystanders.

Yet, most Muslim students, having internalized the message that “Muslims are  fair game,” suffer in silence, bearing the brunt of anti-Islamic fervor in  an adult world. Although the overall number of reported anti-Muslim hate  crimes has decreased in the last year, school-related incidents have soared.  The recent spate of “bullycides” has focused national attention on the ease  with which harassment can slide into tragedy, leading a Muslim educator to  ask, “Do we have to wait for a Muslim-American child to commit suicide or be  killed by a bully” before we take the bullying of Muslim students to heart?

Many Muslim families still believe in the power of education to change  attitudes and the potential of public schools to teach tolerance on a  national scale. The lessons can come from teachers, from students, and  sometimes from the ones being bullied, say Hashem and Autena, who, having  been targets themselves, speak from personal experience. They found that  speaking up — educating other students — brought unexpected consequences.

After Autena took a classmate to task for making obnoxious comments about  “sand people,” the classmate publicly apologized, telling everyone who had  heard his remarks, “What I said wasn’t cool.” As for Hashem: Not long after  he started high school, a cocky kid got in his face and told him to go “back  where he came from.” “I told him I was born in the U.S.A.,” says Hashem.  “That I have nowhere to go. So here I am.”