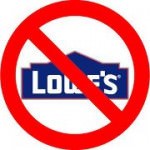 Let’s get caught up:

1. Lowe’s pulls advertising from All American Muslim under pressure from right wing nutjobs

From the right wing nutjobs:

Florida Family Association sent out a third email alert on December 6th which reported The Learning Channel’s new program called All-American Muslim. All-American Muslim is propaganda that riskily hides the Islamic agenda’s clear and present danger to American liberties and traditional values. The email alert encouraged supporters to send emails to the companies (including Lowes) that advertised during the December 4th and 5th episodes.

Lowe’s response (same link as above):

Thank you for contacting Lowe’s. We work hard to listen to our customers and respond to their concerns. Lowe’s has strict guidelines that govern the placement of our advertising. Our company advertises primarily in national, network prime-time television programs and on a variety of cable outlets. Lowe’s constantly reviews advertising buys to make certain they are consistent with its policy guidelines.

While we continue to advertise on various cable networks, including TLC, there are certain programs that do not meet Lowe’s advertising guidelines, including the show you brought to our attention. Lowe’s will no longer be advertising on that program.

2. This resulted in an outpouring of outrage via email, phone calls, and social media. Get a glimpse from the Twitter hashtag – #LowesHatesMuslims

Even Russel Simmons got in on it:

It appears that we managed to step into a hotly contested debate with strong views from virtually every angle and perspective – social, political and otherwise – and we’ve managed to make some people very unhappy. We are sincerely sorry. We have a strong commitment to diversity and inclusion, across our workforce and our customers, and we’re proud of that longstanding commitment.

We strongly support and respect the right of our customers, the community at large, and our employees to have different views. If we have made anyone question that commitment, we apologize.

Thank you for allowing us to further explain our position.

Umm… What?! ‘Managed to make some people unhappy’?? Because this was controversial, they pulled their ads and essentially stand behind it?

This stance means that the initial claims made by the Florida Family Association, in the eye’s of Lowe’s, has credence – i.e. that a show portraying Muslims as “normal” is really a covert ploy to hide their true ‘terroristic tendencies’.

They couldn’t even admit clearly who they upset, as if saying the words ‘Muslim community’ would somehow create more negativity for them. This is evidenced by the fact that many commenters on their Facebook page had no idea what was even going on, as this was such a useless, PR-speak, statement.

Some comments from their Facebook page in response to this statement:

I’m sorry please explain to me how giving in to the fear mongering of a bunch of religious zealots is maintaining a commitment to diversity?

Your statement is a bunch of disingenuous claptrap. If you truly believe what you’re saying, you should probably also pull advertising from any show that discusses any religion.

Its only a hotly contested debate if you believe that fearmongering fanatics who think Muslim Americans are undercover terrorists who want to impose clerical sharia law in America have a legitimate argument. Otherwise, its a non issue and you are simply rejecting the very premise of being a Muslim American citizen. Thats why so many people are genuinely upset and will not be comforted by your pathetic excuse. You have taken a side on this issue by withdrawing your ads.

Now bigots can have their very own place to buy plumbing fixtures. That should make it a little easier to avoid them/you. Good work, guys. See you never.

Lowes pulled their ads from a show about the lives of some Christian American citizens on the Discovery Channel because some small fundamentalist Muslim group protested. Outrageous isn’t it? Wait a minute. I got that backwards. Still outrageous isn’t it?

So, do you plan on pulling all your advertisements from other programs that promote a positive christian view because of crazies like westboro baptist, who represent a minority of a whole but are more well known? Great way to pull away from a show that was helping other understand a culture.

I don’t want to debate the merits of the show, but let’s be realistic. There’s a large segment of the Muslim population that doesn’t agree with this show because they feel it misrepresents Muslims, or only highlights Shia’s instead of Sunni Islam, and so on.

Here’s why that doesn’t matter. Right wing groups spreading this propaganda don’t differentiate between any of us. Sunni, shia, conservative, or liberal. As far as they’re concerned, all of us are just putting on a facade to hide some ulterior terrorist motives. That is why it is important to stand up and say we’re not going to put up with this bigotry.

Learn a lesson from the story of The Three Bulls

There once lived three bulls, a white bull, a black bull, and a red bull. Looking for food, a lion watched them graze together and realized he could not contend with all three. So he went to the black and red bull and made a deal with them. He told them that he was very ferocious and powerful and that if they let him eat the white bull, he would leave them in peace. The black and red bull agreed, and the lion murdered and then ate the white bull.

As time passed and the lion became hungry, he visited the red bull again. As the red bull saw death in the lions eye, as the teeth dug deep into it’s neck, it shouted, “Verily I was eaten the day the white bull was eaten!”

The Florida Family Association and Lowe’s: a clear danger to American values