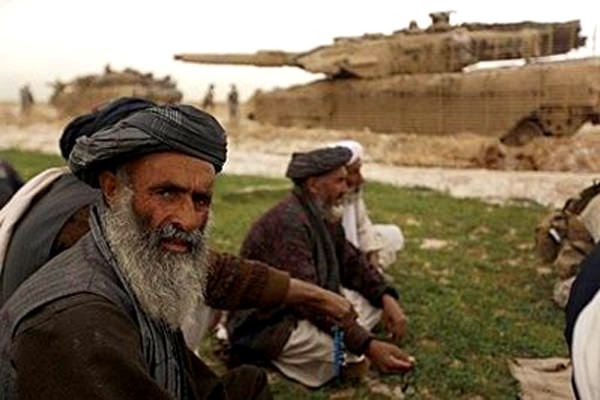 From Jaddaliya.com
By Faiz Ahmed

On 7 October 2001, at approximately 12:30pm EST, US and British forces launched Operation Enduring Freedom, an aerial bombing campaign with the declared objectives of overthrowing the Taliban regime, destroying or capturing Taliban and al-Qaeda forces, and bringing an end to terrorist activities in Afghanistan.

In one of the fiercest displays of military might in modern history, early combat operations included air strikes from land-based B-1 Lancer, B-2 Spirit, and B-52 Stratofortress bombers; carrier-based F-14 Tomcat and F/A-18 Hornet fighters; and Tomahawk cruise missiles launched from US ships and submarines in the Arabian Sea. In spite of this overwhelming display of “shock and awe” force, it was not until April of this year that US forces found and killed the alleged culprit behind the 9/11 attacks, Osama Bin Laden, through a US covert operation in Pakistan.

Less commonly remembered is that in the weeks following 11 September 2001, the Bush Administration held high-level secret negotiations with Taliban officials. As reported by the BBC, CNN and the Washington Post, among other news outlets, US-Taliban talks included the possibility of turning over Bin Laden to an international criminal tribunal. Although most Americans are unaware and policymakers are loathe to admit, negotiations proceeded so far that the Taliban offered to hand Bin Laden over to a neutral third country for trial if they were shown evidence of his culpability in the 9/11 attacks. The Bush administration turned down the offer. Meanwhile, with the exception of one brave dissenting voice from California’s ninth congressional district, Congress had already authorized the use of military force by 14 September 2001.

As the tenth anniversary of our war in Afghanistan looms, Americans have the right to ask: Would not the capture and trial of Bin Laden through negotiation and engagement—with a resultant disruption of al-Qaeda networks, and without the deaths of over 1,700 US soldiers, thousands of Afghan and Pakistani civilians, and trillions of dollars in taxpayer income—have been a preferable path?

True, history is notoriously malleable in hindsight. But as any good historian would also admit, history is not an agreed upon set of dates and facts of the past. It is rather what a nation chooses to remember—and forget. It is about collective memory. The Bush Administration’s secret negotiations with the Taliban are not the only inconvenient truth left out of the dominant narrative of 9/11 and our war in Afghanistan ever since. While some hailed the killing of Bin Laden in Pakistan to a tune of “Mission Accomplished,” meanwhile in Afghanistan, civilian casualties, inexorable corruption, and mind-boggling waste have filled up the margins of the official story. According to a recent report by a bipartisan commission on wartime spending, the US government wasted thirty billion dollars in contracts in Afghanistan and Iraq over the last decade. This includes three hundred million dollars on a Kabul power plant the government will not run, and 11.4 billion dollars on facilities for the Afghan military that have been deemed unsustainable.

Behind precious American lives lost, families shattered, and the unquantifiable disservice to taxpayers and a public sector already under enormous financial strain, an even more disconcerting fact emerges from our Afghan war. From the beginning, the US-led military campaign prompted concerns over the number of Afghan civilians it was killing. Although no government has cared to count, the Los Angeles Times found that in the first five-month period from 7 October 2001 to 28 February 2002 alone, there were between 1,067 and 1,201 reported civilian deaths from the bombing campaign. An independent report by Professor Marc Herold of the University of New Hampshire states that in the twenty-month period between 7 October 2001 and 3 June 2003, US-led military operations killed at least 3,100 civilians. Shockingly, a February 2002 analysis by The Guardian estimated that as many as 20,000 Afghans died as an indirect result of the initial US airstrikes and ground invasion, due to starvation, exposure, or wounds sustained while fleeing from zones hit by air strikes.