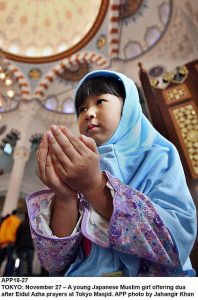 SNA (Tokyo) — Readers of Japanese newspapers in recent months would have difficulty avoiding the term fuhyo higai, which means something like “damage caused by rumors.” This term is now deeply associated with the people of Fukushima Prefecture who have suffered a number of blows to their economic prosperity as an indirect result of the nuclear disaster. But could not the term fuhyo higai be applied with equal relevance to the condition of parts of the Muslim community of Japan?

The livelihoods of some Japan-based Muslims have been negatively impacted by the leak last October of the internal documents of the Tokyo Metropolitan Police Department which alleged that the Muslim community was a potential source of “homegrown terrorism” and even identified particular individuals as probable terrorists.

It is in response to this episode of fuhyo higai that fourteen Japan-based Muslims, including some of Japanese nationality, filed last Monday a lawsuit against the Tokyo metropolitan and national government, claiming that police anti-terrorism investigations were conducted in an illegitimate fashion that abused their human rights.

The plaintiffs are requesting a total 154 million yen―or 11 million yen each―in compensation.  The leaked documents contained very specific information about a number of Muslim individuals, including passport numbers, addresses, telephone numbers, names of their family members, and all sorts of other sensitive personal information.

The documents made clear that some of these individuals were secretly investigated at the request of the FBI, implying that US counter-terrorism policies had provided the motivation for the Japanese police to put some foreign residents and even Japanese citizens under surveillance.  Kazuyuki Azusawa, the lead lawyer for the plaintiffs, observes, “The police are at anytime capable of accessing personal banking accounts for investigations without judicial warrants.”

According to Azusawa, the police have identified and maintain a database on about 98% of the Muslims who reside in Japan, meaning that one’s religious identity alone is being used as a marker for deciding which people are potential terrorists in Japanese society.

For those individuals whose personal information was leaked last October, the “damage” of being fuhyo higai is more than theoretical.

Azusawa reveals that one Muslim was dismissed from the company he had worked for after the leaked documents declared him a terrorist suspect. Another man who owns a small business suffered a major drop in the number of his customers.

Moreover, Azusawa indicates that many of them are now unable to go back to their mother countries since they are afraid that intelligence agencies abroad may take seriously the allegations found in Japanese police documents.

Both the plaintiffs and their lawyers note that the Metropolitan Police Department has not apologized for any aspect of their investigations, nor the damage it may have done to innocent people.  The SNA contacted the Metropolitan Police Department for their comments on the case, but the spokesman said only that he could not discuss any matter that was under litigation.  Not all observers are dissatisfied with the police activities.

Kenjiro Kato, a military analyst, told the SNA: “I do not think police investigation was inhuman when compared to what goes on in Islamic countries where forced labor and torture are being conducted. Japan is one of the most comfortable states for Muslims to live in and there is little bias toward them.” Kato also revealed the interesting fact that a police acquaintance told him in 2005 that they were following Muslims from a certain Tokyo area mosque, not because they really believed there were terrorist suspects at the location, but only as a training exercise to brush up their professional skills in trailing people unnoticed.

Whatever the truth may be―that the police are seriously worried about terrorism, or whether they are merely cooperating with FBI requests, or whether they just want to slink around in the shadows and practice how to follow people―the damage they have done to some Muslim individuals appears to be real, and it raises questions about the police use of state power within Japanese society.

Makiko Segawa is a staff writer at the Shingetsu News Agency.

RE: CNN “Cain’s message — Muslims need not apply” some thoughts on tactics & strategy for US Muslims