Anti Qadaffi forces have made gains in parts of Western Libya, the military has defected, the police have defected. The South and Tripoli remain the stronghold of the regime. Read more on the BBC page.

A video showing mass burials in Tripoli on February 22 was posted by the site OneDayOnEarth. View it here.

In the Eastern Libya, thousands of people celebrated on the streets of Benghazi, waving the pre-Gaddafi flags and handing out food and drink.

A Libyan airforce plane has crashed near Benghazi after the crew bailed out, the country’s Quryna Newspaper reports. The newspaper said the crew had orders to bomb Benghazi, but refused to carry them out.

Update II: As the uprising continues in Libya it would be unfair not to report on the extent of Qadafi’s influence in Africa- he strongly believes in pan African unity visualizing a Unites States of Africa with him as the ‘King of kings’ his words. Read more about his dream of African Unity here . 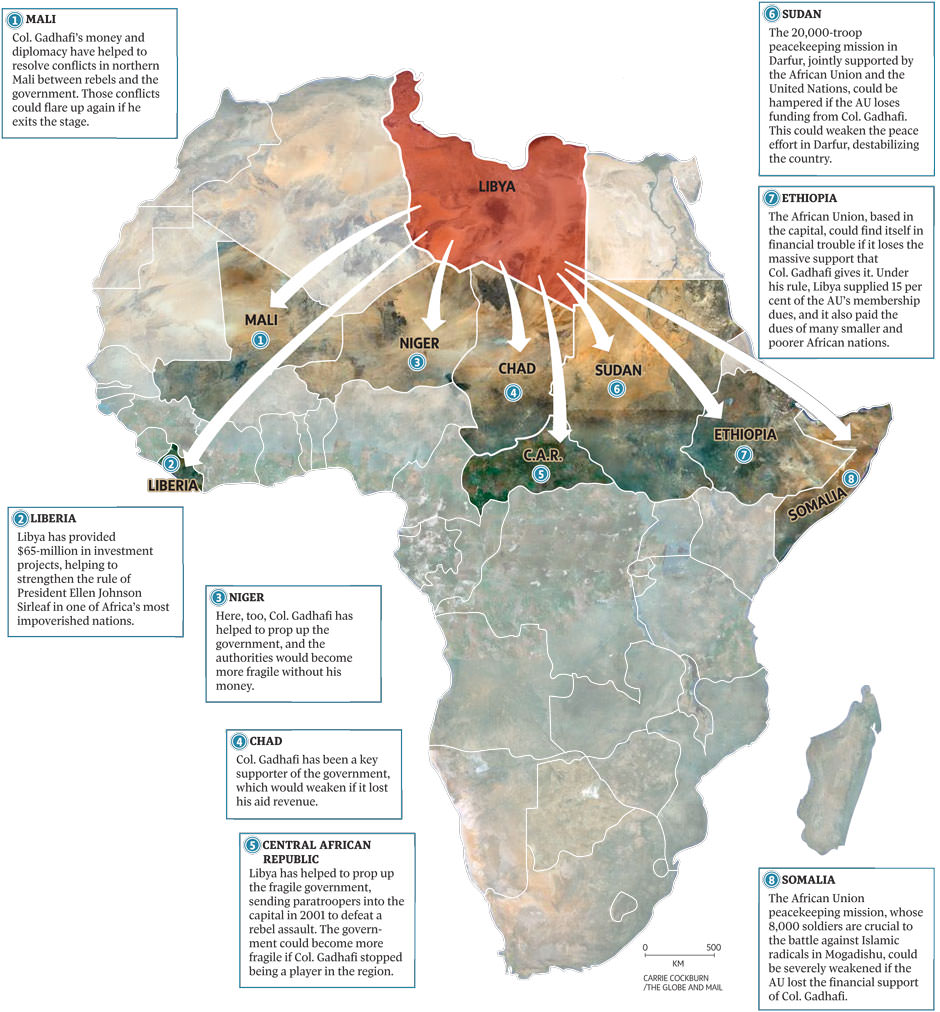 Update I: Qaddafi appeared on national TV to  address the nation. Watch the video for clips of his 1 hour+ speech.

“Muammar Qaddafi is the leader of the revolution, I am not a president to step down … This is my country. Muammar is not a president to leave his post. I have not yet ordered the use of force, not yet ordered one bullet to be fired … when I do, everything will burn…. From tonight to tomorrow, all the young men should form local committees for popular security…. wear a green armband to identify yourselves. The Libyan people and the popular revolution will control Libya.”

He offered a new constitution starting from Wednesday, but this would come with dialogue, not by collaboration with the enemy.

He blamed the uprising on ‘Islamists’ who wanted to create another Afghanistan, and warned that those in Bayda and Derna had already set up an Islamic Emirate that would reach Benghazi.

He said that the country’s youth was drugged and did not know anything; they were following the Islamists’ leader and their leaders would be punished with death in accordance with the Libyan law.

With Friends in High Places:

In the third quarter of 2010 alone, according to the Campaign Against Arms trade, the UK licensed over $6mn worth of ammunition to Libya, including sniper rifles and crowd control ammunition, which is suspected to have been used by the regime to suppress demonstrators. A warning was issued by a legal adviser to the UN Commission on Human Rights who suggested that Britain may be found guilty of “complicity” for the killings of protesters by Muammar Gaddafi’s regime. Read more about it here.

Muammar Qaddafi, the leader of Libya for the past 41 years,  in his first televised appearance since protests to topple him began last week, was holding an umbrella in the rain and leaning out of a van.  “I wanted to say something to the youths at the Green Square (in Tripoli) and stay up late with them but it started raining. Thank God, it’s a good thing,” Gaddafi said in a 22-second appearance. Raining what bombs? bullets? Indeed this image of the evil clown resonates when it comes to his man, reality is scarier than fiction.  His cartoon-ish image augmented by his buffoonery had lulled the world into thinking that he was not capable of this level of mass murder. According to Human Rights Watch more than 300 people have been killed in Libya. Despite the proximity of the last two revolutions in Tunisia and Egypt,  this not in any way in the same league.  What is taking place in Libya right now can be compared to the atrocities committed in Rwanda or Bosnia.

Washington Post reports: Libyan warplanes and helicopters fired from the air and loyalist militias fatally shot protesters in the streets as the government of Moammar Gaddafi fought back viciously Monday against demonstrations that appear to be fast eroding the autocrat’s four-decade-long hold on power. A statement issued by the newly established General Committee for Defense described the protesters as “terrorist gangs made up mostly of misguided youths”, who had been exploited and fed “hallucinogenic pills” by people following foreign agendas.  This is the stance that the regime in Libya have taken. AlJazeera reported that pamphlets were distributed in Guinea and Nigeria.  There are reports of  mercenaries being offered $2000 a day to come to Libya: here is a video of alleged mercenaries patrolling the streets of Tripoli.  This is enraging the Libyans and many are joining in the protests.

One aspect of how  far reaching Gaddafi’s arms are take a look at comments expressed in a Nigerian forum:

One of the other reports after the clip you have above speaks about French Speaking Africans as part of Gadaffi’s armed groups. This would point to nationals from Ivory Coast and / or Bukina Faso. The man has a history of backing armed uprisings in Africa, so when he is finally removed, that might actually help many African countries as the funds, guns and training from Libya will finally come to an end.

Following the revolution in the Middle East, our own Youssef Chouhoud, The Alexandrian tweeted:

#Mubarak was bad for the country, but #Gadafi is bad for HUMANITY. #Libya #Egypt #Feb17 #Jan25

Disclaimer: This is a very horrific and graphic video of bodies of  soldiers burnt alive for refusing to shoot their own people, the people of Libya. several sources that officers in Benghazi, including air force officers, had been executed for refusing orders to kill the anti-government demonstrators. Sources described a mass grave near Benghazi, containing the bodies of more than 100 executed officers.

Libyans from other cities — Benghazi and Misrata — were reported to be heading to Tripoli to join the battle against the government forces, said Mansour O. El-Kikhia, a professor of Middle East studies at the University of Texas, Austin, who had talked to people inside the country.

“There are dead on the streets, you cannot even pick them up,” he said by e-mail. “The army is just shooting at everybody. That has not deterred the people from continuing.”

Innalillahi wa inna ilayhi rajioon.  May Allah grant them peace and tranquility from His eternal treasures. Ameen.  An eyewitness account from Tripoli to Lisa Goldman, reported on 972, states that

The Libyan army is one of the poorest and most neglected security sector in the government. They are poorly fed , equipped, trained and payed. They are mostly ceremonial and Qaddafi does not trust them. So what we have here are private battalions with each of his sons owning the one named for him. So for example his son Khamees has a battalion belonging to him calling it “Kateebit Khamees.” Each is placed in private super huge barracks situated strategically around Tripoli for situations like these. These battalions are well-equipped, trained and paid and are extremely loyal not to the country but to the leader of their battalion.  The regular army is non-compliant and has mostly sided with the people. Remember they are poorly-equipped and so can be of only limited help. However, the battalions belonging to the regime itself are very much in the fight and are killing people wholesale. Still their numbers are not so great to cover this huge country so it seems they are complemented by mercenaries.

Ben Wedeman of CNN, is the first Westernern reporter who has managed to enter Libya from Egypt through Eastern Egypt.  Eastern Libya appears to no longer be in Qaddafi’s control. He reports here.  The border has been opened and there are reports of thousands of refugees finding refuge in Egypt.

Western commentators keep an eye on stocks as the uprising in Libya continues.  The BBC reports Asian stocks fall amidst the unrest in the region. Crude oil prices skyrocketed today, hitting the highest level in more than two years, as violence escalated in petroleum-rich Libya.  Read more here.  Even though Libya provides less than two percent of the world’s oil supply any threat is always a good chance for oil companies to make a killing- (pun  intended with extreme grief). What is a few hundred lives as long as our oil companies continue to make profits. Libyans are still waiting for the world to react to the horrors all of us are watching our TV and computer screens. European Union officials are “encouraging Libya to move toward democracy”.
The United States also has “voiced objections” to the lethal use of force on protesters, in meetings with Libyan Foreign Minister Musa Kusa and other officials, while Italy is worried about the influx of migrants.  Whats worse is the Muslim countries as still mum.  The Libyans asking “why when 4 people died in Bahrain,President Obama spoke up, but 200+ people have died in Libya but not a word out of President Obama’s mouth.”  Ibrahim Dabbashi, “We are in the service of the people not of the regime” watch video.

Two Libyan air force jets landed in Malta on Monday and their pilots have asked for political asylum. The pilots claimed to have defected after refusing to follow orders to attack civilians protesting in Benghazi in Libya.The pilots, who said they were colonels in the Libyan air force, were being questioned by authorities in an attempt to verify their identities. Meanwhile, a group of Libyan army officers have issued a statement urging fellow soldiers to “join the people” and help remove Muammar Gaddafi.  The officers urged the rest of the Libyan army to march to Tripoli. From Aljazeera Read rest here.

Read more about the history of Colonel Qaddafi in Libya’s Falling Tyrant.

Human right abuses in Bahrain | The jihad of Zainab Al-Khawaja