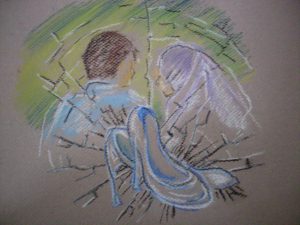 Wedding season is once again around the corner. Many hours of the holiday season will be spent looking upon the beaming faces of the bride and groom and the guests arrayed in all their finery. People will smile and chatter, and at the center of it all will be the newlywed couple.  Why are weddings such a big deal? Why is there such a furor and excitement in the air? Is it that the two people standing up there are actually happy and the guests feel that if they get close enough to them it will rub off on their marriages? The entire British nation is hoping the prospective marriage of their prince will somehow make them forget their economic woes.

I have often wondered what goes through the minds of married couples as they look on. Those that Allah has blessed with some satisfaction in their lives fondly recall their own big day. Their eyes lock and they smile. But the reality of life is never a “happily ever after” affair. Some memory of a recent argument or disagreement intrudes upon the memory of the blissful past. But they brush aside the fleeting thought and sum up the total of their relationship; breathe a sigh of relief and say ‘alhamdulillah.’

There must be those that sit there and say to themselves, “Those deluded fools, they have no idea what marriage is really like. I hope they put in the ‘shut up and put up’ clause somewhere in their marriage contract.” Their marriage has left a bitter taste in their mouth and the sight of the sweet fruit in front of them stirs some long suppressed memory and brings a frown to their faces. They sum up the score on their marriages and continuously calculate their losses.

Then there is the category of people that have never tasted ‘mawadah‘ even in the beginning of their marriages. Marriage to them is synonymous to forced confinement with an unwelcome stranger. They have either consciously withdrawn from the relationship or they are actively abusing their spouse physically or verbally. Their despair is like a creeping shadow that engulfs everything that they come in contact with. Their eyes survey the hall still searching for some warmth to fill the emptiness of their lives.

The media bombards us with images and lyrics of “romantic love” and we are so inundated with these images and sounds from childhood that we cannot truly ever take them out of our subconscious expectations of our spouses.  Those of us that are blessed by Allah (swt) and guided back to the religion take this baggage of unrealistic romanticism with us into our newly transformed lives.

“And among His signs is this,  that He created for you mates from among yourselves, that you may dwell in tranquility with them, and He has put love and mercy between your hearts. Verily in that are signs for those who reflect.” (Qur’an 30:21)

When we read this ayah it seems like a “happily ever after ending.” A paradise in this world and the next. We simply replace the idealized image of the perfect spouse with a Muslim Prince Charming who brings additional characteristics of piety and is an excellent da’ee and recites Quran with perfect Tajweed. From the life of the Prophet we selectively highlight the race with Aisha. We recall how he stood screening her with his cloak as she watched the Abyssinians who were giving a display with their weapons in the mosque. We recall how he took the advice of Umm Salamah at Hudaibiyah when the companions, distressed by the recently concluded treaty, did not rush to obey the command of the Prophet (saws) to slaughter their animals. These images became the benchmark of our expectations for our spouses – any courtesy or affection that falls short of the standard of our beloved Nabi (saws) will just not be sufficient in our eyes.

We conveniently overlook the times when the Prophet’s household also experienced marital strife. Of course the Prophet (saws) displayed remarkable composure but he was at one point so displeased with his wives after the victory at Khayber that he separated from them and there was a rumor in Madina that he had divorced them. The incident of Ifk with his beloved Aisha must have been for all involved a period of extreme distress. Aisha said, “I have spent the entire night until morning unable to stop weeping and could not sleep at all. Morning found me still weeping.” Allah (swt) absolved her of all blame and declared: “Do not think it is bad thing for you; no it is good for you.” (24:11) There were many such incidents where the family of the Prophet (saws) resolved their differences with dignity and trust in Allah. But the point to be made is that they were very human in their relationships and dealings and they used their life circumstances to earn the pleasure of Allah.

We need to have realistic expectations of our spouses in all spheres: emotionally, physically and spiritually. We also need to ensure that we shield our children from the Cinderella stories of our time because they might potentially damage their future relationships. A closer, unbiased examination of the Sirah of the Prophet (saws) will go a long way in making our romantic dreams more firmly rooted in reality.  We can also pursue those romantic dreams and simultaneously earn the pleasure of Allah.  But we must not get ‘Tangled’ in the mythology of the ideal spouse. After all even if the glass slipper fit who would be foolish enough to walk in it?  And how far could you possibly get in a glass slipper?

Picking up the Pieces: The Love-Drug Syndrome and Dealing With Lost Love