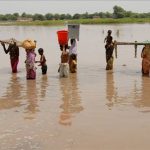 One stands the risk of being dubbed illiberal and unenlightened if one sees in the deluge that has drowned one-fifth of Pakistan, the Hand of God. The floods have, among other things, again brought to the fore the gaping ideological split that cuts across Pakistani society, making it deeply fractured and polarised. The flood, and the way we choose to look at it raises some fundamental questions that strike at the heart of our very self-definition and our worldview – in fact, our very identity.

The Liberal “Fatwa” & The Punishment Theorists

Pakistan’s clique of English writers flaunting liberal credentials are clearly irked by those who insist on seeing the flood as God’s handiwork, and emphatically stress on the fact that inanimate nature and its ‘inhumane’ forces act mechanically and indiscriminately. On the other end of the divide are the ‘punishment theorists’, whose understanding that the floods are God’s anger unleashed on a sinful people does not really sit well. It is both arrogant and ignorant to brand everyone with the same iron. There is a certain unease and discomfort for a thinking mind to buy into either theory. The problem with the punishment theory arises when it leads one to indiscriminate judgement rather than self-reflection. The punishment theory also deflects emphasis from the actual, material factors and ground realities directly responsible for wreaking a tragedy of these dizzying proportions: that no dams have been built in the country for years, that in a routinely flood-prone country there is no proper flood management system in place, and that we have not been sufficiently alerted to the very real effects of the global climate change.

Both perspectives are reductionist and lopsided.  The liberal view for ignoring the normative dimension and failing to appreciate the worth of the realization of one’s powerlessness and the humility and humbleness that come with it. It ignores the understanding central to the Muslim worldview that everything that happens must be seen as a piece in the Divinely-laid scheme of things. Every occurrence fits into the mural of God’s Plan; that there is no random accident, no meaningless chaos or anarchy in nature. For, Nature is Allah’s manifestation, and its processes are by His Design.

The punishment theorists, on the other hand, oversimplify a complex, multi-faceted reality in order to make sense of an inordinate phenomenon. Ignored in the process is the insight offered by some basic religious texts that deal with the subject. For one, the Quran speaks at great length of natural calamity and cites historical instances of punishment through natural disasters to rebellious peoples. However, this should be understood from within a framework of Absolute Justice. Punishment becomes justified only when Truth has been clearly established and vindicated, and Falsehood exposed for all to see; and when the choice between Truth and Falsehood has been made in complete earnest by all. This criterion was fulfilled in the lifetimes of Prophets. Hence the utter rejection and hostility after full knowledge, of a Prophet’s message warranted divine punishment. With the ending of the line of prophethood, this is no longer the case. Hence, it is erroneous to see a natural calamity in this day and age as wholesale, all-out, indiscriminate punishment to its victims of the kind mentioned in the scriptures.

Natural calamity after the time of prophets, functions as a reminder to man of his vulnerability as opposed to the Power of the Universal Sovereign, and of the transience of life. This serves to revive in the heart of man that God-consciousness, awe and fear so necessary to cut him down to size when he tends to get out of his boots. It functions as a test of faith, of patience and of man’s capacity to heal, help and alleviate the suffering of his fellow-man.

Another dimension that needs to be brought into focus is that God, in His infinite Mercy, recompenses every iota of suffering borne by His slaves , and that people of faith who lose their lives to accidents, disasters, calamities are blessed with the ranks of martyrdom. Clearly, being struck by a calamity does not make one less fortunate or more deserving of God’s Wrath. This understanding infuses in the Muslim’s heart compassion towards the sufferers.

A tradition attributed to Aisha, the Mother of the Believers (radiy’Allahu anha) sheds light on the matter with amazing precision. When asked how natural calamities were to be interpreted, she said: “(It is) a punishment for the disbelievers and a reminder to the believers.” (From the audio \”Natural Disasters\” by Shaikh Faisal Abdullah). What this makes clear is that there can be no generalizations and no judgement, for the knowledge of the state of belief in people’s hearts lies with Allah alone. The question of whether a calamity becomes a punishment or a test for those affected by it and those witnessing it depends on every individual’s inner state, impossible to be judged by you or me. It is our attitude towards a calamity – whether we respond to it with patience and learn from it the right lessons, or whether our hearts remain hard and unyielding that makes it either a punishment or a reminder for us. It is always those who humble themselves and can acquire the courage and faith to say “We belong to Allah, and to Him alone is our return”, that emerge triumphant out of every calamity, and whose indomitable spirit no calamity of whatever magnitude can crush.

Out of an instinctive aversion to a ‘not-so-liberal’ worldview, the ‘liberal fatwa ‘ on the flood by our dogmatic friends on the left misses the essential point. It fails to appreciate the value of understanding ourselves as underlings to a Greater Power. An understanding that as we conduct ourselves in life humbles and imbues us with a sense of responsibility and a God-consciousness that makes us constantly strive to better ourselves. That gives us resilience and stoicism in the face of trial as well as compassion towards fellow human beings. That makes us conscious of our greater purpose and that at the end of the day we all are to stand in the Court of the Ultimate Sovereign with nothing but ourselves; knowing that “His grasp is over all vision… and He is acquainted with all things.”

Related Topics:Pakistan floods
Up Next

The Adventures of Homeschooling

My Dream, and the Hajj Journey that Almost Didn’t Happen