Technology is a double edged sword: it can bring you closer to Allah or take you away from Allah, it can be used for haram or halal. Without running after the latest gadgets or wanting just because my neighbor has one, if we kept our needs in mind and use it as tools to help us practice our deen, then it is Allah’s (SWT) blessing otherwise a fitnah. I wanted to share my favorite apps and technologies and how they help me be a better Muslim, InshaAllah.

My Macbook Pro – This was an Eid gift from my husband last year, it was better gift than any piece of jewelry. After getting it I started blogging and have I have found a piece of me that was lost somewhere between the kids and the dishes. May Allah (SWT) grant him Jannah; it’s portability has freed me from sitting at the desktop and I can write anywhere.  It syncs with my phone. My calender is right there so I am better organized, Alhamdulillah.

iTunes– Nasheeds , Quran, lectures. If my kids need to learn the month of Islam nasheed, I download it or when the latest Bayinnah podcast is ready , I can upload it on my iPhone, hook it up to my car stereo and have Sheikh Nouman on surround sound during our long drives in LA traffic.

Online school– this has opened a whole new world for me,. I was so scared when I made the decision to home school my eldest daughter.  Their system is keeping me organized with her attendance & grades. Daily and weekly planning is done for me. It has simplified the process and the curriculum is state of the art.  Without the hassle of ordering books,  devising a curriculum, I can spend time actually teaching her.   When I can not explain something to her I use Khan Academy– This brother attended college with my husband; his goal is to provide a world-class education to people anywhere in the world. He posts short, simple videos on mostly math and sciences explained on an electronic blackboard. A great tutoring or homeschooling tool for kids and adults.  There are several online Islamic courses that you can take over the net along with fabulous websites like Halaltube- Lectures, duroos from scholars on my laptop, TV screen, need I say more.

Skype–  I love Skype. My mother sits across the world on her dining table and I sit on mine. She has her morning chai in her hand and I have my cup of evening tea. It is the closest thing to being next to each other. I can be a better daughter inquiring about her health, it makes her happy to see my face.  She shows me her new curtains and I show her the kid’s awards. My niece and my daughter live many continents away. These best friends and milk-sisters have a  book club on skype, they read the same book and then have discussions about them.  The last one they read was Fudgemania. It keeps them close despite the distance.

Using Skype, we broadcast my sister in law’s Nikaah to her grandma in Saudi and her aunt in Karachi simultaneously. Our friends are moving and her kids are super excited about Face Time, Apple’s video conferencing tool on the new iTouch- so they can keep in touch with their friends where ever they move in the world. With distances and relative and friends all over the globe, technologies like these help keep the ties of the womb & kinship, as long as you keep the right niyyah and don’t let it overtake your life.

Are you an Apple or a PC?  There are avid users of both platforms on the Muslim Matters team as you can guess by some of their nicks ie iMuslim, Muslim Apple.  Many of the brothers are PC fans as well as Sister Abez. Microsoft got extra props from most of us because of Bill Gates’ donation record vs. Steve Jobs’.  As for phones, some of us use Androids, HTC Evo or Droids, others would never give up their Blackberrys.

These were my favorites apps and tools, I am sure there are many more. What are your favorite apps or websites, which platforms do you guys use? any new Apple converts? so what’s going on with the blackberry ban in the Gulf states? is it still on?

Rally to restore sanity tidbits (our own MR was there and will be posting a recap soon): 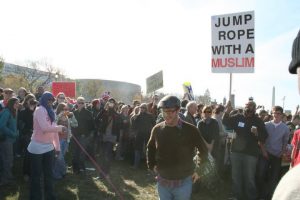 When many ‘pundits’ exhort Muslim moderates to do more (which peeves me)- What do they want us to do? Have a rally like this in the National Mall in D.C. That many Muslims gathered together in one place can you imagine? We were heckled and protested against at the RIS conference in Long Beach with just 3000 of us. A million of us all at the same place aaahh  the terror!! We would scare them in our Muslim garb- further fuel their stop Islamization of America agenda. They would probably accuse us of trying to take over Capitol Hill and the preemptive ballot measures like the one against Shariah law in the Okhlahoma would multiply. Scary…

That reminds me of ‘Halal’oween– Many of us who live in the West and now even in Muslims countries see Halloween with all its paraphernalia this time of year-what do you do? Do you hand out candy or turn off the lights and pretend you are not home. What about the kids do you let them dress up or get them excused them from the Halloween parade at school/neighborhood?  I have been asking to host an alternative event for the kids at our Islamic center. But this has caused some controversy. Some think this would commemorate a day that we should just ignore, other parents insist we should host something, while others think I am being an extremist because I do not celebrate this ‘secular’ event or am attacking Christian values???? Rejected from the center, we are having Game Night  for Muslim kids at a friend’s house; races, a potluck, board games, Jenga, pray together, Quran quiz, candy – So ‘Halal’oween yes or no or maybe?

Common, Oft-repeated Mistakes During Hajj and Umrah (so you can avoid them!)