Ramadan Around the Globe Series:

Until  recent events Stateside stole its thunder, Europe was the undisputed champ of Islamophobic rhetoric and action. To be sure, things haven’t cooled down in the Old World – the protests, provocations, and political grandstanding just aren’t getting as much twitter love these days. Given this charged atmosphere across the continent, I wasn’t sure what to expect as I set out for my first Ramadan in Sweden.

My ties to Scandinavia begin and end with my wife and her family, Egyptians who’ve spent all or the vast majority of their lives in Sweden. Their house, a two-story home within the classic Northern European mold, is situated in Täby, a sleepy suburb of Stockholm. Growing up in New York and spending the past few months in Cairo, it’s safe to say that  Täby had a much slower pace than I was used to. Indeed, Stockholm itself is far from a bustling metropolis. Still, what better time to break from the hustle and bustle of urban life than Ramadan?

One thing that I was actually a bit wary of was the relatively minuscule Muslim population in Stockholm. Here, again, New York and Cairo have spoiled me a bit. I’ve been blessed to be around fairly large Muslim communities for most of my life and the prospect of celebrating Ramadan comparatively isolated was a bit concerning. Still, as I learned during my MSA experience at a mid-sized, predominantly white university, quality can often trump quantity. That was certainly the case in Täby. 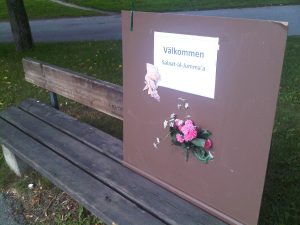 The scant few Muslims in Täby hardly number enough to fill a musallah, let alone a masjid. For perspective, I estimate that my wife’s immediate family along with her uncles and their families probably make up 10-15% of the total Muslim population in their town. So, as with many small local communities back in the States, the brothers and sisters here rent out a basement flat for Jumua prayers, taraweeh, iftars, etc. Save for the inconspicuous sign on the bench adjacent to the musallah‘s entrance (and the mini-parade of Arab and African men early Friday afternoons), one would probably never know there was a place of worship in this condo complex behind the local mall.

Inside the “Täby mosque” (as the congregants lovingly, if incorrectly, refer to it), there’s an atmosphere of solidarity, of everyone banding together. The khutbas are handled by a couple of Syrian brothers, one delivering the sermon in Arabic and another translating it into Swedish; at night, the 20 rakats of taraweeh are divided between the khateeb and a Saudi brother (both of whom make use of a musHaf during their recitation, may Allah reward them for their efforts); on the second day I went, an Egyptian doctor was sponsoring an iftar; and pulling all this together was a Pakistani brother who handled the day-to-day issues of the prayer space.

I was impressed, too, that the brothers had the foresight to put together a makeshift entrance and sitting area for the sisters, giving both groups just enough space. One thing that I noticed though is that only one of the jumua attendees appeared to be Swedish. It makes sense, I guess; if I was a convert, I’d want to go to a bigger gathering, to the biggest mosque in town. So off I went to check out Stockholm’s “Mega-Mosque” (aka, a regular-sized mosque that somehow becomes mega by dint of it’s mere existence above ground). 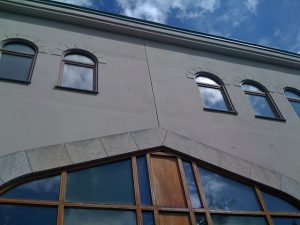 The city’s central mosque is fairly unassuming from street level. At night, all that distinguishes it from the other buildings in the area are the echoes of Quran coming from inside its chambers. Every other evening throughout this month, the voice of recitation is that of an Azhari sheikh brought over to lead prayers during Ramadan (it’s nice to know that Egyptian exports aren’t limited to fuul and falafel). On the night we went, though, the usual imam of the masjid, a Syrian brother who seems to have spent a good deal of time in Sweden, was leading the eight rakahs at about a 1 1/2 page pace. All was tranquil – until suddenly it wasn’t.

Towards the end of the sixth rakah of taraweeh, a man began shouting, seemingly to himself, and pacing furtively back and forth. As we were getting up to pray the next set of rakahs, the man made a bee-line to the imam, shoving brothers left and right along the way. About four lines in, a group of impromptu security guards (i.e., five brolick brothers) grabbed the guy and dragged him outside the prayer hall and ultimately outside the mosque. The imam then promptly continued the taraweeh and everyone followed suit.

Admittedly, I took a minute before entering the salah. I couldn’t help but wonder whether the man would be back, whether he wanted to do more than just cause a ruckus…whether violence was his ultimate goal. Not wanting to enter my prayer unfocused, I just reasoned to myself that, la qadar Allah, if anything tragic were to happen, what better state to be in than in prayer to my Rabb?

Afterwards, I learned that the individual who caused all the trouble was a brother likely under the influence of alcohol or drugs (may Allah guide him), but my reaction was nonetheless telling of our current state of affairs. I never before felt in danger while at a mosque, but the present atmosphere of Islamophobia sent my mind immediately to thoughts of hate crimes and backlash.

I wish I could comfort myself by believing that back in America I would’ve felt differently, but the situation on US soil is starting to be just as perilous, as evidenced by the recent attack on a New York cabbie and the desecration of a Queens masjid. I wish it were otherwise, but I can’t help but have a sense of unease about the immediate future of Muslims in the West – a sense that we’re just starting to see the fruits of bigotry and the worst is yet to come.

I don’t want to make it seem like Muslims in the West should expect a perpetual state of anxiety from here on in. Hopefully, Europe will take a cue from (pre-Glenn Beck) America. For that matter, here’s hoping (present-day) America will do the same. We shouldn’t forget, however, our role in all this, that we have a responsibility to portray Islam in the best light.

One of the the Syrian brothers who founded the Täby mosque is emblematic of the kind leaders that our burgeoning communities need in order to move forward. As soon as he came to Sweden in his late 20s, this brother learned his new country’s language, set out to become a productive member of society, and is now a psychologist at the local hospital. Today, he has greatly benefited not only the local Muslims, but the greater Swedish community around him. As more Muslims set out to do the same, in whatever small way they can, I truly believe this heightened state of Islamophobia will, inshAllah, soon become a thing of the past.

Ramadan Fragrances: Of Body Odors and Perfumes & the Person Praying Besides You