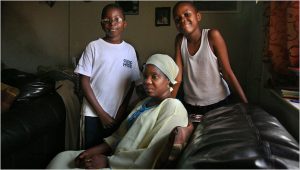 By Sam Dolnick of the New York Times:

Nearly every Sept. 11 since Sept. 11, Hadidjatou Karamoko Traoré has made sure that her three children were dressed in their best clothes, and taken them from their tidy brick home in the Bronx to the pit where the World Trade Center stood, and where her husband, their father, worked and died.

After the attacks, all that was found of Abdoul-Karim Traoré, a cook at the Windows on the World restaurant, were his leather wallet, his identification cards and a few coins.

“I like to go down there and pray and see the place and remember,” said Mrs. Traoré, a native of Ivory Coast who came to the United States in 1997. “When I go there, I feel closer to him. And him to me. I pray for him, too.”

When she prays, she calls God Allah. Mrs. Traoré, 40, says praying in the pit feels entirely natural, even if some of those standing with her — widows and widowers, parents and children — blame her religion for the destruction of that day.

“That’s not fair,” she said. “It’s not because of Allah that these buildings fell.”

Mrs. Traoré is the widow of one of roughly 60 Muslim victims — cooks, businessmen, emergency responders and airline passengers — believed to have died on 9/11. It is a group that has been little examined, and no precisely reliable count of their ranks exists. But their stories, when told, have frequently been offered as counterweights in the latest public argument over terrorism and Islam.

Mrs. Traoré works the overnight shift as a nurse’s assistant at Jacobi Medical Center in the Bronx. She loves to cook: peanut sauce and doughy fritters are her specialties. She has a wide smile and a raspy laugh. Her life, a juggling act of homework, bills and prayer, is one Sept. 11 story — the kind of personal account Mayor Michael R. Bloombergand others have sought to highlight amid the debate over a planned Islamic community center near the pit where Ms. Traoré prays every September.

Over the past nine years, Mrs. Traoré has lived a kind of dual life. She is a 9/11 widow struggling to raise her children, cope with her loss and tame her anger. The trials of her days would ring familiar to single mothers and fathers from Staten Island to Washington. But she is also a Muslim woman, both devoted to her faith and conscious of the discomfort it can evoke in her adopted homeland.

She wears Western clothes when she shops at Costco. But she wears a robe and head scarf when she visits her mosque in the Bronx. When she is in her religious attire, she can sense a shift as people on the street appear to regard her with suspicion.

“When people run away from me, I feel sad,” she said. “But I understand why they’re doing that. What happened was terrible.”

Her two sons, Souleymane, 11, and Siaka, 9, attend a Roman Catholic school near their home. During prayer, they sit in the back of the classroom with the few other non-Catholic students. They feel comfortable there, but they, too, have hidden their religion from schoolyard bullies. Mrs. Traoré received government money from the Sept. 11 compensation fund, and she said she was both unsurprised by and grateful for the American generosity.

Mrs. Traoré is also frustrated and troubled, she said, that so many Americans find it impossible to separate the pious of her faith from its fanatics. But it has not buckled her beliefs.

Muslims and Islam Were Part of Twin Towers’ Life

Allah in the Land of ABBA: Ramadan in Stockholm, Sweden