I read a tweet from Wisam Sharieff the other day, on how he tried to spread awareness of Ramadan to non-Muslims by way of handing out treats. 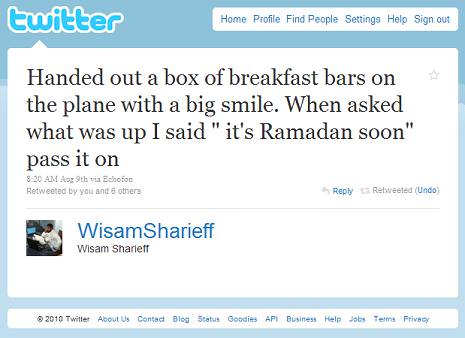 This inspired me to do something like this on my own, so I consulted my wife:

“I want to take something to work tomorrow. Do you think I should make brownies?” I asked her, before leaving for tarawih night prayers on the first evening of Ramadan.

After a little thought and realizing that she probably knows better than me, I approved it, and the plan went ahead.

The next morning, my wife baked and decorated the cake, while I went to work. I picked it up during my usual trip home for lunch, brought it in to work, and sent out the following email:

There’s chocolate cake with strawberries on the back counter behind Jayne’s desk. Please feel free to have some. 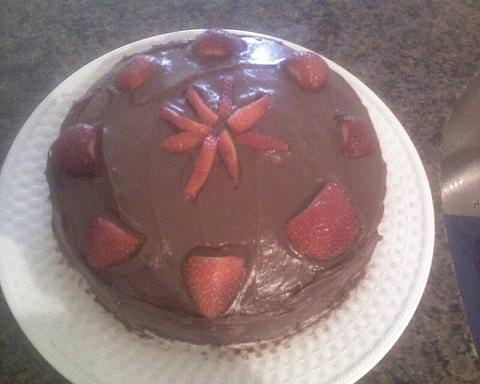 My wife baked it as a celebration for today being the first day of Ramadan this year.

While my associates were excited about getting free cake, it opened up a dialogue on Ramadan and Islam, as I had hoped.

Associate #1 asked what Ramadan was. I explained that it is our holy month, in which the Qur’an was revealed, during which we fast daily to come closer to God. She asked what the Koh-ran was, and if we do it for Mohamed. I explained that the Qur’an is what we believe to be the final scripture after the Bible. And, as is the case for everything else, we fast for God. To us, Muhammad is a prophet, just like Jesus, Adam, Moses, and so on. She was blown away! She had no idea that we believed in the other prophets, or in a continuation of scripture; she thought our religion was one dedicated solely to Prophet Muhammad (peace be upon him). She then shared with me her annoyance at the way that Christmas and Easter have been commercialized and paganized, and commended us for keeping our tradition strong.

Associate #2 asked, “So are you fasting? When’s Eid?” Being from India, she probably knew what was going on, from being around Muslims back home.

Associate #3 came and said, “Happy Ramadan! Is that okay to say?”I laughed and replied that of course, it was.

Associate #4 also asked what Ramadan was and, after hearing that it involved fasting, mentioned that she used to fast three times a week for one year, while visiting sick people in the hospital. Amazed, I asked her if she felt spiritually empowered by it, to which she responded that it made her feel that, if she can give up things that she likes, then she can do anything. I explained that this is exactly what we believe we get out of fasting: if we can abstain from what we can have (halal), then we certainly can stay away from sins and what we’re not allowed to have (haram).

Associate #5 approached my cubicle with a very serious face. I asked her why she was so solemn; she said that she was going to ask a personal question, and didn’t want to offend me. When I let her know that she didn’t have to be so formal, she asked what Ramadan was. I explained to her what the month was about. She panicked at the idea of not eating all day, for twelve hours. I told her fifteen. She was shocked.

Associate #6 kicked in, saying that when he played football in college, he had a teammate named Nasir who fasted while continuing to train and lift weights. I mentioned that NFL’s Husain Abdullah of the Minnesota Vikings, and Hakeem “The Dream” Olajuwon do the same. He said he remembered Abdullah doing so last year, and that he was really impressed that someone could do that for their faith. Props to that brother, Nasir!

Associate #7 chimed in, saying that she read an article in the Tribune the other day, about a woman who homeschools and was trying to focus on patience and self-control while fasting in Ramadan. The article is actually about Olivia Kompier, wife of MuslimMatters’ author Siraaj! I told the associate that she’s a convert who accepted Islam while in high school (may Allah reward the people who helped her find it), opening up the idea that non-Muslims in America find our religion and grab onto it.

So, with a little cake mix, frosting, and strawberries, I got a mix of dialogue that not only began with an explanation of Islamic theology, but ended with an example of someone converting to our faith.

As curious and open as some people are to hearing about our beliefs, a lot of them don\’t know much about them, or have misconceptions that can be easily corrected. It doesn’t hurt to have the information we give them go down with a little chocolaty goodness!

I hope this story inspires you to do something like this with your own co-workers, classmates, and neighbors. If not now, then for Eid. But try to do something!

Thanks to Wisam Sharieff for inspiring me, and thanks to my wife for baking the cake.

There’s a leftover chunk that didn’t get eaten. Iftar dessert after breaking my fast, you ask? Maybe. That, or a 4:30 am suhur… :)

We Feed You for the sake of Allah Alone – Humanitarian Day