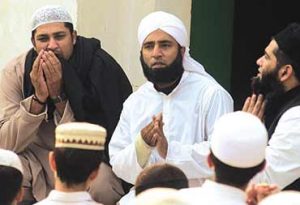 By Anon: Cross-posted from AE

The Tablighis, easy target for criticism,
Attacks against them launched with cynicism,
Politically unaware, intellectually docile,
Painted by some as simplistically puerile

But I must hasten to disagree,
And quote to you some history,
To prove the nature of my claims,
And perhaps to defend their noble aims

When Hinduism was spreading in Mewat,
And Muslims were losing Iman from the heart,
A spiritual man arose who stood apart,
And founded what we now know as Tablighi Jamat

Who knew this spark of love would spread like fire,
For the situation seemed quite dire,
It transformed darkness to illumination,
And rescued the Sunnah from devastation

Empty Masjids cried floods of tears,
As no worshippers made sujud for many years,
And then crowds came back and thronged their floors,
You can see angels smile, and the heavens echo with applause

The dhikr of Allah is being revived by their crowds,
Throughout the lands jama’ahs travel like rain-bearing clouds,
Bringing much sought for water to thirsty lands,
And turning to luscious green arid desert lands.

Some people may be unaware of this information,
That Mawlana Ilyas was an initiated Sufi master,
But he saw the Mutasawifs and ‘Ulema remaining aloof from their congregation,
Whilst India’s Muslims plunged into great disaster

So he took the da’wah out to the masses,
Like bees flying on journeys making honey in stashes,
Unknown inhabitations became honeycombs sweet,
Where millions of Muslims gather and meet

They left their families and their abodes,
And embarked on difficult dusty roads,
Travelling for the pleasure of the Divine,
To replace the darkness of post-modernity with the Sunnah’s shine

Embryonic change happens in Forty Days,
Strange Indeed are Allah’s ways,
Dont call this number a reprehensible innovation,
Perchance it be a sign of your lack of academic discrimination

In the way of Allah each step they tread,
But only for Jihad this should be said?
Open the hadith work of Bukhari- the chapter on JUMU’AH,
Ya akhee fillah,
In that very chapter not about Jihad, it quotes the hadith of the feet being covered with dust fee sabeelillah

How many a former drug addict I have encountered in these lands,
Whose previously injecting hands are enshrouded with ancient sins,
And now he sits in the house of God with a tasbeeh in his hands,
Those same hands make dhikr on those beads of strings

How many a robber who used to steal,
How many a Zani who shamed the earth’s surrounds,
How many a musician singing profane sounds,
Now recounts God’s Jalal – it makes him yell out squeals,
And now the earth begins to smile, as he prostrates and as he kneels….

How many a face – black, white and yellow from every schism,
Sit on a mat and eat together their repast,
Whilst politicians talk of the problems of racism,
“Oh this is not our problem”- a thing of the past.

He makes nadama and in tawbah turns,
His heart with love of Allah yearns,
God Bless you Oh dearest Mawlana Ilyas,
How beautifully you turned Yaas Into Aas

From the orient to the occident,
And from the south right to the north
Crowds emerge with intentions heavenly bent,
And taking Allah’s name alone, they come forth

Of their forefathers are written in historical works

Whilst Nations sit before cathode rays,
That titillate their eyes with their enticing ways,
These men rebel against Satan’s zto frustration

They sit of the floor as it indents their knees,
They know not of Nietzsche, Hume, Kant or Socrates,
They couldn’t perhaps recount Ghazzali or Avicenna’s complex kalaam,
But the dhikr of Allah makes their souls calm

This is not to deny the place of the Mutakallimin,
Without whom we would be in disarray,
But for the masses such complex arguments can lead astray,
So let dhawq and wijdan provide them with yaqeen

They are not by tales of Machiavelli’s prince infected,
The Sahabas‘ stories motivate their lives,
Such dark political ideologies before such heroes stand rejected,
Upholders of truth and self sacrifice

They hold no huge political rallies protesting to creation,
In the nights they stand in prayer before the answer of every supplication,
And with tears flood the floors begging for mercy and rejuvenation,
Once more gifting glory to the Ummah of the best of creation

Don’t approach the worldy kings -they cannot protect,
A pretzel falls into their tracheas, almost suffocating,
Such a small little thing He cannot eject?
How will he give Honour to those who stand outside the White House waiting?

They couldn’t tell you about quantum mechanics or Hawkings,
They couldn’t refute Darwinian thought or the reductionism of Dawkins,
They don’t know that much of Heisenbergs’ principle of uncertainty
For to them the kalimah is a deeply rooted certainty

They might not know Chomsky’s views on Linguistic Bayan,
Or how Steven Pinker’s instincts about neurolinguistics fit,
But they have of a surety read Surah Rahman,
And know that language is from Allah a merciful gift

And not the product of random forces without end,
Or indeed a blind watchmaker – no my friend,
The blindness is in your hearts – not the maker of harmony
So with Ahsan’l-Qawl..They call to the Absolute with humility

On the Day of Reckoning when the Prophets say nafsi nafsi…
Perhaps Dawkins will smile, albeit, temporarily,
Thinking “Ah my Selfish Gene Thesis was true,”
Even these Prophets are exhibiting ultimately a selfish hue

But then Mustafa shall come and say Ummati Ummati…
Such selflessness which will cause his theory to terminate suddenly,
This is the beloved of Allah, and this maqam you cannot explain scientifically,
So discard Dawkins Memes for Muhammad’s MEEM (saw)

They fall not prey to materialism or such bakwas,
They see the Divine hand behind each moving leaf,
In fact they are aboard a Noah’s ark constructed by Mawlana Ilyas,
They hold on to the Sunnah with their teeth

Of Freud’s oedipus complex they remain unaware,
Or indeed of changing uncertain paradigms,
Iman, Salah, the 6 points are in the air,
The Kafirs who promote intellectual kufr will pay for their crimes

Qiyamah is before their eyes,
Not mere logical premises philosophers surmise,
But deep rooted convictions that change their lives,
You don’t have to read volumes to be called wise

Those of us who study in intellectual arrogance,
Forget Rumi’s tales of the lover’s simple acceptance,
The intellect is still looking for its transportation,
Love has circled the Ka’ba 7 times in dedication