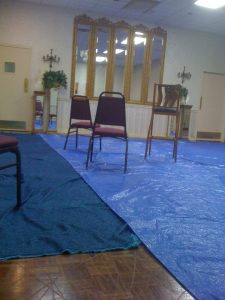 Last Friday after my Penalty Box post was published, I went to salatul-jumu’ah at a hotel. The usual space was reduced by a third due to a scheduling conflict with another group’s event. On a normal jumu’ah we have three rooms, two for the brothers and one partitioned off for the sisters. This day with only two rooms, the brothers had one room and the second room was divided by some chairs with brothers in the front and sisters in the back. The partition was opened in the middle to allow the overflow of brothers to enter the second room and to provide the sisters with a view of the imam. Those sisters that desired more privacy could sit closer to the wall to be out of sight of the men.

I wish I had a better picture to show you because despite the impromptu nature of the setup, it was one of the best setups that I’ve ever experienced. I had intended to take more pictures after everyone left but I was only able to manage this one before a little girl grew fascinated with the slider capacity on my phone. By the time I regained control of my phone, the partition had been moved and the brothers were putting the rooms back in order.

I came early and took my seat in the back of the room against the wall to try to get into the ajr-filled last row but also in a spot where I would be able to have a clear view of the imam. The khutbah began with two beautiful reminders:

“And (remember) when your Lord proclaimed: “If you are thankful, I will give you more…” [Ibrahim 14:7]

1. I appreciated being able to clearly see the imam standing while delivering the khutbah. The sensory experience is quite different when able to see the full range of expression and verbal and nonverbal speech than simply listening or even watching on a monitor. I think I’m a fairly good listener and have become adept at listening without visuals. I am usually able to stay focused, yet I believe my attention and focus was greater with the direct line of sight to the speaker.

2. I didn’t mind being cramped and squeezing myself against the wall to make way for the other believers, as space was a genuine concern.

3. The imam is better able to lead the community when he can see them, all of them. He can ask the brothers to move up, or more fully utilize the open spaces, and can see what issues there are as they arise and help to immediately correct or rectify them. The imam acknowledged the presence of the sisters and showed care and concern for us, even saying that the sisters could move up the chairs if they needed more space.

4. Many times we hear the necessity for erecting a barrier to prevent the men and women from seeing each other, which could lead to fitna. Yet, it seems to me that while we are ostensibly lowering our gazes, even if you were to see someone that attracted you, the community and the environment would not allow for any improper interaction. And perhaps, if interested in marriage, one could then inquire in a proper fashion about that person. Do you know that brother with the handsome beard or black kufi? Or, do you know that sister with the green hijab or black niqab?

5. I love praying in congregation. It is rare with our Western concepts of personal space and distance that we sit and stand in such close proximity to complete strangers. Careful not to bump into or step on each other, regretful if we do, but not overly concerned because there is this mutual understanding that comes with knowing that we’re all just trying to perform our salah in the best way possible.

6. Listening to the reminders and recitation of the Quran is critical for one’s iman and the life of the heart. The imam recited Surah Ad-Duha in the first rak’ah. I remember my first time consciously listening to this surah: I was driving my car in the morning, behind a slower moving car, on the way to my first AlMaghrib class. As I passed the car, I realized the hijabi driving it was also probably going to the same class. I didn’t know then what the words meant as I was still relatively new in Islam, and I wondered if I would ever be able to learn that surah. At that time, those few lines seemed like a mountain. I remember racing home to read the translation and saying yes, indeed to those rhetorical questions. Those words are so powerful and so comforting:

3    Your Lord has neither forsaken you nor hates you.
4    And indeed the hereafter is better for you than the present.
5    And verily, your Lord will give you so that you shall be well-pleased.
6    Did He not find you an orphan and gave you a refuge?
7    And He found you unaware and guided you?
8    And He found you poor, and made you rich?

7. I’ve been blessed and am thankful to have grown up in my Islam in such a beautiful community.

8. Why do I love going to the masjid? As I said earlier, I love praying in congregation; it inculcates so many beautiful manners and characteristics within us. Parts of Islam are meant to be practiced communally. Coming from a family of non-Muslims, practicing Islam in my house is to practice Islam alone. To pray alone, to fast alone, to remember Allah alone, sometimes to eat alone, to celebrate alone all the while being surrounded by elements hostile to my Islam. Truly, I think all of my closest friends that I have met in Islam have been through my interactions at the masjid or Islamic events, mostly seminars.

I learned to read the Quran in the masjid starting with the Noorani Qaaidah and alif, ba, and ta. My Bengali teacher saw me struggling and asked a Saudi sister to help me out, and the sister whose name I’ve forgotten sat with me in the masjid and patiently worked with me. I owe both a huge debt of gratitude; I learned so much from their manners, and I hope that they are rewarded with each letter I recite. And the masjid is such a mini United Nations or like the Olympic Games in its diversity. I can glimpse the diversity of the Muslim world in the vibrancy of my own community, which makes me a little more accepting of others and differences and reminds me that I am not alone in my belief in Islam.

The second part of the khutbah focused on practical examples of implementing the two reminders given earlier. A few weeks ago, someone asked me for help and since I was able to help, I helped him. Last week, I was in need of help, and I won’t lie, shaytaan whispered to me for a split-second saying, “If only I hadn’t helped that person, I would be okay, I would have enough to be able to do this or that.” But recognizing that shaytaanic impulse, I pushed it away and out of my mind and said alhamdulillah and just like that someone came to my rescue and helped me out of the situation. And then shortly thereafter in many different ways culminating on this day of jumu’ah, Allah (subhanahu wa ta ala) resolved the entire situation for me in ways I never imagined with more than I could have imagined.

…And whosoever fears Allah and keeps his duty to Him, He will make a way for him to get out (from every difficulty). And He will provide him from (sources) he never could imagine. And whosoever puts his trust in Allah, then He will suffice him… [At-Talaq 65:2-3]

10. I am often asked by those that do not believe or are unsure of their belief in God, why I am so certain in my own belief in God. And I can say without any doubt that everything in my life and the world around me testifies to existence of Ar-Rahman, the Most-Merciful and for that blessing I am most thankful. Alhamdulillahi rabbil alameen.

Beyond Exorcism: Black Magic Spells, Pieces of Sihr (Talismans/Amulets), and the Disease of Hasad (Envy)