More often than not, speeches given to “the youth” are problematic. Our younger Muslim brothers and sisters complain about speakers being way too technical and their talks going over their head or being so negative and encouraging of self-loathing that the audience begins to become disenfranchised with Islam altogether.

This speech by Farhan Abdul Azeez of Canton, MI, however, was hailed as the best speech of the 2009 MMYC (Michigan Muslim Youth Council) Spring Conference.

Right after it ended, every attendee I came across was raving not only about how good it was, but even saying it was the best speech of the conference, only halfway through the entire program.

So what made this speech so good for such a critical crowd? 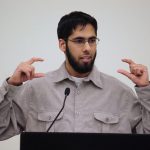 Firstly, it contained solid and sound subject matter primarily focused on the Qur’an. The book of Allah is generously filled with wisdom we fail to grab, and even more so for the youth who are disconnected with it. This speech on repentance constantly referred back to the timeless events told in the Qur’an. When you keep it simple and go that route, you can’t lose.

Second, the speaker and his words carried social relevance, a huge tactic needed to connect with such a specific audience. Farhan would, for example, connect the topic of gaining mad amounts of taqwa with ascending to the level of a Super Sayian in DragonBall Z, a concept which you may know nothing about but totally hit home for some in the MMYC crowd.

Lastly, the speech was a lot of fun and made easy for the kids while maintaining seriousness and respect for the subject matter presented. There were jokes, but there were also moments of pin drop silence. There was crowd participation. There was even a break in between where Farhan had everyone massage their neighbors and hug them (AlMaghrib style!). Having small tricks like that really went a long way.

So if you’re involved with high schoolers or younger, or are looking for a good example of how to cater a lecture towards them, check out this video. It’s a great example of the style needed for our younger brothers and sisters growing up with Islam today.

To be Among the Brave Ones this Ramadan