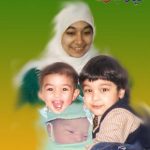 As we come to the celebration of Eid-al-Fitr of 2009, it is the 7th Eid we will celebrate without Aafia being among her friends and family. But we will celebrate. Not because we forget Aafia or because we abandon her but because there are many reasons to celebrate and to be thankful for God’s many, many blessings.

In some ways, for a long time, I could not get myself to see beyond the pain and stress of the whole saga of my sister disappearing with her three young children, and that too under such a notorious cloud of suspicion and innuendo. Celebrations or even allowing oneself to experience the simple pleasures of life seemed wrong and filled me with remorse. After all, Aafia and her children were denied these same treasures of family and friends that only freedom allows, and yet we all take for granted. So, for a long time I put myself in a mental prison with her even though it was neither productive nor therapeutic.

During the last year events have taken our whole family on such a phenomenal roller coaster ride of emotions and stress that I am amazed that we are all still here. Much of this has been played out in public and many of you have had a window into our journey. Aafia is still in a miserable place and it seems like the most powerful forces on earth are determined that she stays there. So many people come up and express sympathy but feel that we are fighting a lost cause – hoping in the face of a hopeless situation. Yet, I find reason to celebrate and have genuine hope.

One of the less publicized benefits of Ramadan is that it gives a person time to slow down and reflect. This month helped bring much into perspective. The break from the physical and mental flurry that has engulfed our family the last few months was put aside for long enough each day to give time to reflect and wonder why? – Why on earth did God do this to Aafia and us all? What did we do to deserve this? Where are the mercy and blessings of the Beneficent and Merciful God? And while I still do not know why, I do realize that there was no shortage of blessings. In fact, just as there has been so much pain that it numbs, there have also been so many blessings that they began to look routine even when some were nothing short of miraculous.

In 2003 when this nightmare began, we were isolated and “friends” began to desert us. Fear of job loss and persecution of our children was not mere speculation. We endured threats, warnings and separation of family. Then we had to mourn what we believed was the death of Aafia and her children – but we could only do so in private and in silence. Yet, God blessed us with relative safety and comfort. We learned that promises were cheap and courage and loyalty were rare. We learned to differentiate between a friend and an acquaintance. We learned to distinguish sincerity from opportunism and the painful lesson that trust is frequently misplaced.

Now, seven Eids later, we find that for each “friend” we lost, we were blessed with a multiple. Our isolation has been transformed into the support of thousands. We witnessed the miracle of resurrection as someone we believed dead was returned to life – not once but twice for us. That same Aafia who was once a pariah is now a unifying element for a whole nation. Her son, we were “guaranteed”, would spend the rest of his life in a US mental institution. Instead, he is living with family and recovering in a loving environment. This in itself would be enough to make one eternally grateful but God’s mercy did not stop here.

Twice during the past year alone, my mother was in critical condition and we were certain she would pass from us without seeing Aafia. Yet, she has recovered significantly. Whether she is destined to see Aafia free, only God knows.

On multiple occasions, supporters were cautioned to back off, but the result somehow was increased momentum. When newspapers were advised to reduce coverage, TV stations stepped in. When banners were discouraged, songs appeared. I cannot explain any of this except as God’s blessing to have brought out people we neither knew nor had the means to employ. What is even more remarkable is that the support has grown to include a broad spectrum of political, ethnic and social cross section of people – from the religious to the secular; from the poor to the elite; from the right wing to the left.

Then, just two months ago, when Aafia’s fate seemed sealed in a US courtroom, and our family was struggling to raise sufficient funds to retain decent lawyers for Aafia, the Pakistani government did something they have never done before for an ordinary citizen. They retained a team of lawyers to pursue a serious defense for Aafia. It was the sincere efforts and prayers of people like many who will read this that resulted in this historic commitment. People set aside differences to join together for a common cause. And we got proof that indeed if we do our part with sincerity, God does His part. This historic act, whatever the motivation, was surprising to the point of shock, even to us.

But as I reflected on this month, it really should not be a shock. For one thing we have experienced in our ordeal is that we too have undervalued and underestimated our heritage and people. It has become too common and acceptable to belittle and dismiss Pakistan and its society as corrupt, callous and self destructive. While there is much to justify these attributes, we also discovered the spirit of the people of Pakistan, their generosity, their passion, their frustration and their desire for peace, respect and dignity. Most of all, we were touched by the hunger for something around which to unify and regain a sense of pride as a nation. And we were humbled when our Aafia became one such symbol.

I have focused largely on the public events only because many of you have been witness to these and can testify to them. There have been many other things for which we are grateful but these will have to remain private for the time being.

To conclude, I would say that while a month of reflection has not answered why we have had to endure this ordeal, three important lessons have become obvious:

With these lessons, I will think of Aafia even more. Not as someone who brought difficulty into our lives but as someone who has helped us, in an odd way, put our priorities into perspective. And while this does not gain her freedom or ease her pain, all the events I have recounted and lessons learned are what give me reason to hope. To hope that one day, God willing, our journey will come to a happy destination and be a source for joy and hope rather than sadness and despair.

My God Bless You