In continuation of the post “Chill Out Like The Prophet: Tips For The Stressed Muslim Da’ee – Part I“, we analyze more ways of how to relax and de-stress, the ‘sunnah’ way.

Nap during the day: 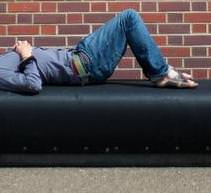 A stressed out person will find it difficult to take a relaxing snooze during the day, but this was the sunnah of our Prophet [صلی اللہ علیہ وسلم] and his companions. Even if you have too much to do and just can not take out the time, force yourself to relax for half an hour by either curling up on the couch in your office or, if that will be too ‘weird’ for office staff to see, just lean back in your chair with your eyes closed. The Prophet was in the habit of napping regularly as part of his daily routine:

Narrated Thumama, Anas said, “Um Sulaim used to spread a leather sheet for the Prophet and he used to take a midday nap on that leather sheet at her home.” Anas added, “When the Prophet had slept, she would take some of his sweat and hair and collect it (the sweat) in a bottle and then mix it with Suk (a kind of perfume) while he was still sleeping.” [Sahih Muslim, Volume 8, Book 74, Number 298]

Narrated the uncle of ‘Abbas bin Tamim, “I saw Allah’s Apostle lying on his back in the mosque and putting one of his legs over the other.” [Sahih Muslim, Volume 8, Book 74, Number 302]

Narrated Anas bin Malik, “Whenever Allah’s Apostle went to Quba, he used to visit Um Haram bint Milhan who would offer him meals; and she was the wife of ‘Ubada bin As-samit. One day he went to her house and she offered him a meal, and after that he slept, and then woke up smiling.” [Sahih Muslim, Volume 8, Book 74, Number 299]

In the last narration above, the Prophet was apparently just relaxing in the mosque, not taking his midday nap. Allahu a’lam.

Ironically, some organizations have noticed the effect of “power naps” on their employees’ productivity, and are facilitating 20-minute naps in “nap rooms” on office premises!

Relax with your head in your wife’s lap, or have her comb your hair:

Narrated ‘Aisha: “The Prophet used to lean on my lap and recite Qur’an while I was in menses.” [Sahih Bukhari, Volume 1, Book 6, Number 296]

When was the last time you did either of these things? (Tip: it would help to shampoo your hair and beard the day you intend to do this; if your has bid you farewell forever, well, the beard can be the next option?).

Narrated Aisha: “A necklace of mine was lost at Al-Baida’ and we were on our way to Medina. The Prophet made his camel kneel down, dismounted and laid his head on my lap and slept. Abu Bakr came to me, and hit me violently on the chest, and said, “You have detained the people because of a necklace.” I kept as motionless as a dead person, because of the position of Allah’s Apostle (on my lap), although Abu Bakr had hurt me (with the slap). Then the Prophet woke up and it was the time for the morning (prayer). Water was sought, but in vain; so the following verse was revealed:–“O you who believe! When you intend to offer prayer..(5.6)”.”
Usaid bin Hudair said, “Allah has blessed the people for your sake, O the family of Abu Bakr. You are but a blessing for them.” [Sahih Bukhari, Volume 6, Book 60, Number 132]

Even during a journey which got delayed because of our mother A’ishah losing her necklace [notice the desire to adorn herself even while traveling], when water could not be found for ablution for the whole caravan, the Prophet [صلی اللہ علیہ وسلم] was relaxed enough to lie down with his head in his wife’s lap.  Notice how he did not rebuke his wife even slightly for unintentionally causing a delay in everyone’s travel. His best friend, on the other hand, lost his temper at his daughter due to the stress of the circumstances; it all ended well, though, because this situation became the cause of Allah revealing the verses of tayammum that became a source of ease for Muslims, for all time to come.

As interesting contemporary evidence of the comfort of a woman’s […ahem, wife’s] lap for relaxing on, take a look at this article.

Having meals with his neighbors, kin, friends and companions was a norm for Allah’s Messenger [صلی اللہ علیہ وسلم], so much so that usually he’d also take along, to a meal to which he was invited, the person who was with him when he received the invitation to it.

The cutest hadith (below) depicts him accepting an invitation to a neighbor’s meal only on the condition that his wife also accompany him to it, because she was present when the invitation was extended:

Narrated Jabir bin Abdullah: “I said, “O Allah’s Apostle! We have slaughtered a young sheep of ours and have ground one Sa’ of barley. So, I invite you along with some persons.” So, the Prophet said in a loud voice, “O the people of the Trench! Jabir had prepared “Sur” so come along.” [Sahih Bukhari Volume 4, Book 52, Number 304]

They got up along with him, and (all of them) came to the house of an Ansari, but he was not at home. When his wife saw him, she said, “Most welcome,” and Allah’s Messenger said to her: “Where is so and so?” She said, “He has gone to get some fresh water for us”.

When the Ansari came and he saw Allah’s Messenger and his two Companions, he said: “Praise be to Allah, no one has more honorable guests today than I (have)”. He then went out and brought them a bunch of ripe dates, dry dates and fresh dates, and said: “Eat some of them”. He then took hold of his long knife (for slaughtering a goat or a sheep). Allah’s Messenger said to him: “Beware of killing a milch animal”.

He then slaughtered a sheep for them; and after they had eaten of it and of the bunch, and drank, and when they had taken their fill, and had been fully satisfied with the drink, Allah’s Messenger said to Abu Bakr and Umar: “By Him in whose hand is my life, you will certainly be questioned about this bounty on the Day of judgment. Hunger brought you out of your house, then you did not return until this bounty came to you”.

The above ahadith make clear how asceticism – in its literal sense (not to be confused with ‘Zuhd’) – is not part of Islam, confirmed by these aspects of the sunnah of our Prophet Muhammad [صلی اللہ علیہ وسلم] (please see this for more on Zuhd). He not only enjoyed good company, but also enjoyed eating wholesome food, while, of course, maintaining the limits of abstaining from extravagantce in eating. This extravagance becomes a  fitnah in itself; however, occasionally treating one’s self to favorite food and drink – be it cheesecake, brownies, steaks, kabab rolls, frappes or pina coladas –  is definitely not prohibited in Islam. Alhamdulillah for that!

So, endeavor sometimes to invite some brothers/sisters over for a meal (make it a potluck if you wish, to distribute the cooking work), or go to a restaurant or coffee house for an enjoyable tête-à-tête. Do this at least once a month to release stress. At times like these, ensure that obedience to Allah is maintained during the outing.

The burned out, stressed, workaholic Muslim da’ee is not the desired picture we want to paint for ourselves; such a person misses out on the beautiful sunnah’s our Prophet Muhammad [صلی اللہ علیہ وسلم] practised, which not only made him the best role model for all believers, but which brought a lovely balance in his life  that beautifed his dealings with others. Taking time out from your stack -full of meetings, conventions, conferences, classes and things-to-do lists, in order to give the dues of others as well as those of your own body and soul, will enable you to perform even better at your duties, in a less amount of time and with less effort, insha’Allah.

So next time that ‘irritating’ neighborhood kid makes spit-bubbles at you, remove that scowl from your face and try being friendlier with him. Who knows, he just might be inspired by your sweet nature, over time, to join you on your trips to the weekly halaqah or Islamic Center.

Impact of Naseehah in Ramadan: A Short Story

Chill Out Like The Prophet: Tips For The Stressed Muslim Da’ee – Part I