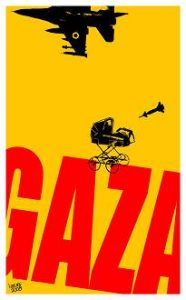 In my last article, I mentioned the importance of the attribute of justice as a Muslim when it comes to not generalizing about other groups of people, particularly Jewish people. Although a number of Jews are Zionists, Zionism as a cause and ideology is distinctly different from Judaism as a religious identity and there exists a large community of Jews across the globe that openly reject the idea of Zionism. There are also those Jews who are ambivalent about Zionism, and at times very critical of Israeli tactics. Such people thus represent important partners in our efforts to command good and forbid evil particularly in the Middle East crisis, and they are also special people that should not be ignored in our dawaah efforts.  I hope that I have sufficiently presented the case for this position in my previous post and in some of the comments that followed it which you can refer to if necessary (here).

The audio clip below is from an interview done on 1/13/09 with Monterey, California’s KRXA 540 AM with the Morning Show’s host, Hal Ginsberg (KRXA’s General Manager and principal owner).  Hal is a Jewish American who attends synagogue there in the Carmel area. His guest the day before this program was a Rabbi from his congregation in Carmel. Hal disagreed with some of the positions taken by his Rabbi as expressed on the air and wanted to provide a counter-opinion. I respect Hal very much for using his position as manager of this station to air opposing view points and to give others the opportunity to make their case.  He is an excellent example to cause those who possess the “Jews own the media and we can never get our positions represented” mentality to reconsider the position.  And he is far from being the alone in this aspect alhamdulillah.

Beard Trimmings: Behind the Scenes of the Beard Interview (w/Bonus Outtake Reel)