The Preface: The next few days will be dedicated to blogging the MANA conference, that ended earlier today. While I am still recovering from “pretender-journalist”-fatigue, I thought I would at least introduce the topic while its still fresh in my mind. 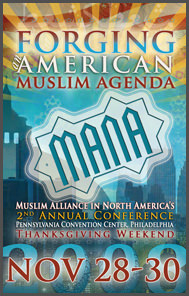 MANA (Muslim Alliance in North America) held its 2nd annual convention in the city of “brotherly love and sisterly affection”, Philadelphia at the Philadelphia Convention Center. Philadelphia of course is a historically significant city, and is now significant to Muslims for the obvious and large presence of Muslims in the city, to the point that some call Philly a “Muslim city”. Thus the site’s choice was strategic in this sense.

A few months ago, we decided that it was necessary for MuslimMatters.org to blog about the conference, because of its importance in the “indigenous” community. Also, since we have seen a flavor of what we loosely call the “indigenous-immigrant” divide on the internet, we felt that MM could provide an online platform to first recognize, then heal, and finally build the bridges between the two communities moving forward– if only to play our small part.

Being closest to Philadelphia, the blogging responsibility fell on me, and I was on my way to MANA Friday afternoon with Yasir Qadhi, who was scheduled to speak at the Conference for the first time. The invitation extended to Shaykh Yasir by MANA was in itself a step forward for both Yasir and MANA, as MANA recognized the need to diversify both its guest-speakers and its audience, and YQ recognized the need to be engaged with the “forgotten” community.

The two days that I was at the conference were focused on interviewing several of the guest-speakers at the Conference, including: Imam Johari Malik, Joshua Salaam, Esam Omeish, and many others. While I also had Ihsan Bagby, Sherman Jackson, Imam Talib Abdur-Rashid, Zaid Shakir and Siraj Wahaj on my list of desired interviewees, it became quickly obvious that these individuals were engrossed in conference activities, and I’ll have to get who I can get. I also took hundreds of photos.

I am especially thankful to Imam Johari Malik, one of the key figures in the conference and MANA itself, for affording nearly 40 minutes of private time to give an interview on the conference, and on a tangent, discuss the blogosphere. It is great to see our Imams in tune with both the old media and the new media. And more importantly to recognize that the future belongs to the “new media”, which still includes the blogosphere, though who knows what the internet will evolve into tomorrow! I am also thankful to Br. Sultan Mohammed, nephew of the late Imam WD Mohammad, who arranged spiffy press-passes for our MM contingent and tried his best to arrange some interviews for us.

First, an important disclaimer and recognition: I am not quite cut out for field-journalism! There are some things that you can do, and there are others that aren’t quite in your “area of expertise”. Writing in your private space, at your own pace, is quite a different task from grabbing people on the spot to interview on video, while still trying to take notes and observations about conference organization, speakers, speeches, etc. Yeah, you can have a few canned questions, but the need to improvise with different “types” of interviewees can be quite challenging. I also realized that while my cousin Urooj (my helper and “amateur photographer”, may Allah reward him for his patience and stamina) and I were graciously given press-passes, our teeny camera and camcorder were no match for the professional equipment that REAL press people were carrying around! It was almost embarrassing, but hey, this is only a hobby (I think!). Note to myself: take equipment that at least appears serious next time!

Not only was I a bit unprepared and unbecoming of a “real” journalist, the pressure was redoubled when Imam Johari announced and praised the presence of Muslim Matters in front of a large audience (700+) in a key-note evening session on Friday. This led to one of the moments you want to put behind yourself as soon as possible! As the Imam was mentioning MM, he also seemed to be looking around, as if suggesting that people from MM stand up and be recognized. Shaykh Yasir who was sitting next to me started nudging me about it, so I finally just stood up and waved. Well, as you might have guessed, I am not sure recognition was on Imam Johari’s mind, because he didn’t quite notice me and moved on! Another note to myself: wait for a specific “call of recognition” before standing up in a big crowd! :)

Overall, and remember this is only a preface, I enjoyed my experience in meeting people, getting different perspectives, and above all, breaking out of my “regular” circles, to be in an Islamic conference where I was a minority in a sea of “indigenous” African-American brothers and sisters. I enjoyed meeting Br. Tariq Nelson again, appreciated the private pep-talk from Imam Johari Malik, met some other people that I only kind of knew from the internet (like Dr. Esam Omeish), Abu Muslimah (who came as an attendee), and networked with many others. My new, spiffy MM business cards came in really handy too alhamdulilah (shout-out to Saqib & iMuslim for creating the design). Some other highlights and memorable moments:

May Allah reward all the organizers, speakers and participants of MANA for putting together quite an event.