This concludes the three-part series on parenting in the West.

Raising Children in the West- How Do You Define Respect by Umm Reem © MuslimMatters.org
Part 1 | Part 2 | Part 3

Islam and Respect of Parents: 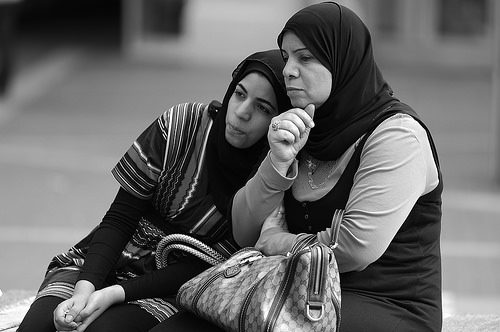 I must take the readers back to my original question:

How does Islam define respect? Is there a scale of respect to judge by? Or does Islam expect us to give our parents what is considered the “MOST” of that time and in that culture?

As a number of students of knowledge explained: There is , technically, no set definition of respect in Islam, and it differs from culture to culture and time to time. However, respect constitutes avoidance of saying or doing anything that is displeasing to the parents and the following verse sums up for us:

“And your Lord has decreed that you worship none but Him. And that you be dutiful to your parents. If one of them or both of them attain old age in your life, say not to them “uff” (any word of disrespect), nor shout at them but address them in terms of (qawlan kareema) honor.”  (17:23)

The meaning of “Kareem”, in the dictionary, ranges from: Generous, kind, good-natured, high-minded, respectable, honorable, decent, precious and valuable! Hence, in general, what is known to be polite and decent is how a child should speak to his/her parents.

I must quote the beautiful advice Abu Hurairah (radiAllahu anh) gave to Abu Ghassan Adh-Dhabbi who was walking in front of his father, “You have missed correctness and contradicted the Sunnah. Do not walk in front of your father, only behind him or to his right side and do not let anyone separate between you and him (while walking). Do not take a bone that has meat on it, which your father looked at, for he might have wanted it. Do not look straight at your father, do not sit until he sits and do not sleep until he goes to sleep.” (at-Tabarani)

If a child is taught to adapt this advice of Abu Hurairah, it will only flower a humble and praiseworthy personality, inshaAllah and I believe this can be done while maintaining a friendly or informal relationship with them.

Although, there are many aspects of respect that will differ from culture to culture, time to time and even from family to family, it is obvious that everyone appreciates kind and polite words, loving tone, caring gestures and a humble personality.

This brings me to my second question: Is “respect” and “mercy” synonymous?

The next verse after the above quoted verse is:

Perhaps, Abu Haneefah was very cautious of any element of pride/arrogance touching his heart and that’s why he avoided telling his mother that he already knew the answers to her questions. Or perhaps that’s the kind of relationship he had with his mother and that’s what his mother expected of him. Or perhaps that is a story we should often tell our children :) !

However, as I continue to tell my children the tales of the great men and women, I must also be an “easy” going parent by understanding their weaknesses and demanding less. Let us remember that Allah azzawajal has made us one of the ways for them to achieve Paradise. We can be complicated “back roads” parents, or we can be smooth “highways.”

When I read Shaikh-ul-Islam Ibn Taymiyyah saying, “Abu Bakr said in his book, Zad-ul-Musafir, ‘whoever made his parents angry and brought tears to them, is required to go back and make them laugh,’” I realized that, although, perfection may be the goal, there must always be room for mistakes and shortcomings.

Allah azzawajal honored the scholars of the past by hiding their flaws, thus we only hear about their good character. As we concentrate on the good of our role models, we must acknowledge that they, too, had shortcomings, and while we don’t look for/ask/dig into their shortcomings, we are constantly exposed to our children’s shortcomings because of the closeness we share with them. We should not underestimate the goodness they can be capable of, and knowing their shortcoming and weaknesses should not discourage us from concentrating on the good qualities and setting “high” standards for them.

And most importantly, as we try to polish our children’s positive aspects, we must establish a positive example for them with our actions, specifically in our dealings with our parents!

We parents in the West will have to work hard to discover methods to instill “respect” in our children as we make our own values and draw our own lines, preferably, taking the best of both East and West. In fact, we should consider ourselves lucky that we are exposed to both of the cultures and are able to offer the best of both to our children. We will make mistakes, but we must learn to quickly recover, avoid repetition and improve.  Although it is difficult, it is worth the constant struggle (juhd).

As we make du’a, we should stay firm with patience.  We should wait for the “results” with patience. We don’t want to narrow down our scope to 5-10 years.  It is easier to instill an “immediate” respect (through the fear factor) that will perhaps last until the children hit the “teenage” years. Our goal is to raise children who learn to respect their parents and elders for the rest of their lives through thick and thin, inshaAllah.

To conclude, perhaps similar to this is the example of growing a plant in a flower pot vs. a tree in the yard. The one in the pot with pretty flowers can be seen so easily around the house, but the one growing in the yard takes time to become “apparent.”  It is far easier to handle the plant in the flower pot, but it doesn’t grow beyond its pot and the “pretty flowers” come to an end. Planting a tree in the yard takes far more effort, it is hard to protect from the heat and the birds, takes time to flourish, but once it blooms, it grows far beyond, stays firm and becomes a shade for the entire house!

May Allah make our children a way for us to enter Jannat-ul-Firdous!