Facebook, MySpace, Reddit, Digg, StumbleUpon, RSS, Podcast, YouTube, BlogLines, Tecnhorati, del.icio.us…….. You’ve heard about all of them, or heard the names, or used them without knowing. What is it exactly?Social Media:

Social media are primarily Internet-based tools for sharing and discussing information among human beings.The term most often refers to activities that integrate technology, social interaction, and the construction of words, pictures, videos and audio. This interaction, and the manner in which information is presented, depends on the varied perspectives and “building” of shared meaning among communities, as people share their stories and experiences. [wiki]

To put it another way, it’s the ultimate “word of mouth” medium.

A blog (kind of like the one you’re reading now :P) is a good example of this. But how do you go from simply getting the content online, to getting it seen by the masses? I’m going to write in more detail later, insha’Allah, about how to use these types of technologies in general in a future post after I finish a book I’m presently reading on the subject.

For now though, it’s important to look specifically at the technologies that help content go viral.  I’m going to write about the sites that are seemingly most popular, and also the ones I’m most familiar with.  This post will focus mainly on Digg.com and Reddit.com.

Digg is probably my favorite of these types of sites. I have discovered tons of great websites and articles from it. In fact, I even have a gadget for it on my Google homepage.

How It Works [wiki for more info].

Users  submit (or “digg”) stories that they find interesting. This creates a page at digg.com with the title, a brief excerpt, and comments (if any) about that article/video/picture/whatever. Other registered users (registration is free) can ‘digg’ the article if they like it, or they can also ‘bury’ it if they think it’s lame or not newsworthy. Users can also leave comments on the digg page of the article (example), which can also be ‘dugg’ or ‘buried’ with a thumbs up or thumbs down. The tally (thumbs up = +1, thumbs down = -1) displays next to each comment so you know how other users felt about that comment. I personally have my digg set up to only display comments with at least a score of +10, so I only read the comments that are “socially relevant” to the content at hand.

Everything. It is entirely user driven. To get an idea though, of what the “digg community” usually finds interesting, you can get a good idea by seeing what topped Digg in the last:

Why Should Muslims Care?

Quite simply, it’s as close to “mainstream” as we can ever get our content. Obviously, civil rights cases like Dr. Afia, Ali Timimi, and countless others will not be covered on CNN. Most non-Muslims will have no idea about what is going on. This is a way to make those issues socially relevant to the internet community at large. Just as an example, the story about the sister attacked in Elmhurst was the first MuslimMatters article to get more than 10 “diggs” at digg.com. The result? It *almost* got popular enough quick enough to hit the front page, but despite falling short of that target, referrals from digg.com on that article totaled over 500 direct hits (and all in one day).

To get on the front page, it needs to get enough diggs in a short span of time to be ‘made popular.’

Put that number in perspective though.  CAIR could easily send an email about that to tens of thousands of people (if not more), however, how many of them open the email in the first place, and then actually read the contents of the whole email, and on top of that give any kind of due attention to one issue? On Digg though, it is safe to say those 500 people clicked on it because they were either interested in the article, wanted to go see what the ‘buzz’ was about, or glanced at the comments about it, and decided to go see the article for themselves. In all of these situations though, the article was not “spammed” to them or “shouted at them” but they looked at it from their own accord. This is much more powerful than simply “getting the message out” – it’s making that message hyped up and/or socially relevant to the community.

When we find good, high quality, content that can make an impact, or communicate an important message, we need to spread that message across the mediums available to us.

As with any social community online, it is important to follow the generally accepted practices of that community. You can’t just barge in and do whatever you feel like doing. You have to observe how people interact on there. Here’s a few tips to keep in mind:

1. Don’t go crazy with submitting new content. It’s tempting, but you really want what you submit to shine through, or really be important. There’s already enough fodder on there, you don’t want to add to it. Plus, if you are submitting a lot of articles, you can develop a reputation for good or bad articles. According to the Digg wiki, a small niche group of users are responsible for almost 25% of the content that hits the front page – meaning people are watching what they do.

2. Number 1 becomes more important with this step. Build your network. Add your friends so you can ‘shout’ diggs to them that are important to your network. I also feel this is the best way to promote things you want to ‘digg.’ While the occassional action alert might be called for, it is frowned upon by the community at large to have some kind of “organized” effort at getting something on the front page, because it goes against the nature of the site. The Digg Wiki also indicates some ‘conspiracy’ theories about this kind of behavior.

The friends network function is something built into digg for the purpose of letting your friends know about stuff. I’m a big proponent of utilizing what’s designed for you as opposed to creating a new way (like a “muslims on digg” email list which I have thought about but ultimately decided against).  The friends network gives you the ability to share your diggs with others, while also letting them make their own decision (without pressure) about whether to digg it or not.

3. Appropriate content. One netiquette (that shouldn’t apply to us alhamdulillah) is that if you are “diggin” something that you wouldn’t want to pull up on your work computer, you should preface it with an NSFW tag (Not Safe For Work). This might be something you don’t want to have up on your screen as your boss is walking by, or a video with some vulgarity, etc.

The other thing is to make sure the articles you submit are important to the community. Digging civil rights postings or islamophobia posts? DEFINITELY. Digging an article about Dorito’s being halal? Great stuff, but not for digg. Remember who the audience is.

One way to know if your content is appropriate or not is to see how well it fits into the existing article categories on the site. Digg, for example, does not have a category for “religion” or “Islam.” That means, and I know this goes against some of the sentiment on MM lately about Digg, is that we should not be digging general articles about Islam. Digg is a tool, and to get the most benefit out of it, it needs to be utilized as it was designed.

Other tools, like StumbleUpon, do have Islamic sections, and we’ll touch upon that in a future installment insha’Allah.

4. Take part. Don’t just submit articles from only one website, or one subject. Check out what others are digging. Personally, I don’t leave a lot of comments, but I do digg comments up and down occasionally, and I probably at least glance at 2-3 of the popular articles on a daily basis.

5. Site the original article. Let’s say you go to MR’s blog and he has a post that is just a YouTube video, or an article pasted from CNN without any additional comments. In this case, if you want to digg that content, even though you might want to help give traffic to a Muslim site, you should digg the “source” content instead of someone linking to it. So go back to YouTube and digg the link there, or digg the actual CNN article.

6. Don’t submit duplicates. Digg has an algorithm to check for this, but people do it anyway. Please don’t. It doesnt really serve a purpose except diluting the message of whatever it is you are trying to digg.

Reddit is basically the same thing as Digg (except that you vote things up or down), so the information above should still apply.

Using These Tools With MuslimMatters

We have tried to integrate these tools into our posts to make it easy to “digg” articles for example. At the top of each post is a small bar of text that looks like the picture below. This will alert you to see if anyone has “dugg” this article already, so people with Digg accounts (or if you are going to make one after reading this), take note. It should be sufficient to feature this on the site so we don’t have to utilize the comments section for this purpose.

And at the bottom there is a bar that looks like this: 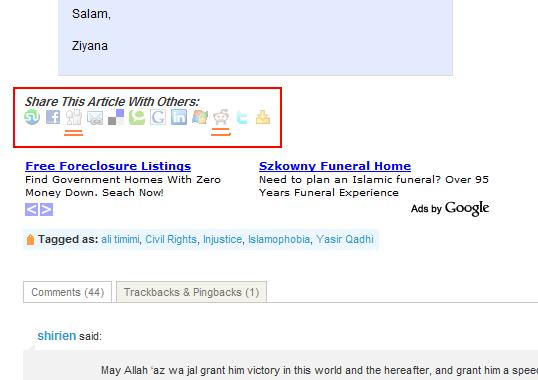 You can see the Digg and Reddit icons underlined in the photo above. Clicking on any of those is an easy way to submit something you like to either of those sites.

Next up, we’ll look at some more of these sites, like the other icons in the picture above :).

Related Topics:diggmuslimsredditsocial mediaTech
Up Next

A Complete Beginner’s Guide to RSS