So, my family spent the day of Eid at Six Flags NJ with Shaykh Yasir Qadhi & family, and oh about 8000 Muslims. A few thoughts on the event before you watch the slideshow.

First of all, kudos to ICNA-NJ for putting together a fantastic act. Organization was excellent, and the warnings from some friends that “it’s going to be a zoo”did not materialize. Folks at the event generally behaved much better than the iftaar-dinner rush. Lines were for the most part orderly and line-cutting was rare, though I did catch a young brother going twice on the Superman ride by pretending he was stuck in his seat. More power to him… one Superman ride was enough for me for the day… actually for the entire year.

Food. Well, you know its all about the food, especially the day after Ramadan. The first lunch after a month. Generally speaking, most people found food to be priced on the higher side. But the shawarmas were fairly-priced for a theme-parking setting, at $6 a pop. No wonder they were sold out by evening. My biggest cow was with the drinks. Soda and water bottles were going for a cool $4 each! I suspect that there was some park rule mandating the price, because the vending machines had sodas for the same price. Other than shawarmas, there was ofcourse the desi-mainstay- biryani with your choice of tikka, kabab or other combination. The price? 10 bucks. About a 30% premium on your average store price, not bad again for a theme-park. There was also an “all-American” stall, selling franks and other American “delicacies”. The prices were all in the same range. Folks complaining about prices have to remember that the vendors have to make money AFTER giving cuts to probably the park and the organizers.

Enough of food. When we arrived at the park at about 945 AM, the crowd was sparse. I would say no more than about a 1000 Muslims (I believe it built up to 6-8000, my guess). A huge banner welcoming us with the salam was the first sign that we were officially in the Islamic state of six flags. At about 10:30AM, Shaykh YQ started the prayers, followed by a khutbah that patterned off the one he gave at Yale the day before. Yes, Sheikh Sahib, as he is lovingly called by MM’ers, had celebrated Eid the day before, so this was his second Eid khutbah and prayers (yes, it is ok fiqhi wise). The Khutbah was solid, strong and kept people awake, which is a hard task usually for morning khutbahs. Towards the end, Sheikh sahib plunged full-steam into the Obsession DVD and its repurcussions, telling people about the Dayton incident.  I did attempt to make a few videos with my camera, but that did not work out, for an important reason, which I will mention later.

After the khutbah, we had shawarmas for breakfast (couldn’t resist), and then started our trek through the park. What was probably the best part of going to six flags on this day, was the short-lines. We were in and out of rides within 15-30 minutes maximum, without any fast/speed passes! Awesome! After “breaking-in” on a few easy rides, especially the kids-coaster (I have to say YQ still looked fearful on it :) ), we started walking towards the big-boys’ rides. First up was Skull Mountain. Fresh from graduating from Blackbeard’s Lost Treasure Train (rides list here), YQ was gung-ho about trying it out. As it turns out, it was not too bad, but Sheikh Sahib was done.  He started complaining of how he has to drive a long way back. In essence, he chickened out :) and we couldn’t shake his resolve!

Next up was Batman. Two words (in teen lingo): totally rocked! After that, there was no looking back. Nitro and Superman and more. I refused to go on Kingda ka (fastest and biggest drop though my cousin, Urooj, our unofficial guide, thought it was lame)… had to leave something for the next time. I missed out on El Torro, which Urooj swore as being the best ride in the park. I should have missed out on Dark Knight, which was quite awful, basically consisting of some jhatkas (wild jerks), and that’s about it. The best ride in my opinion, for what it’s worth, Superman! That first loop sitting on your stomach, was indescribably chest-crunching! 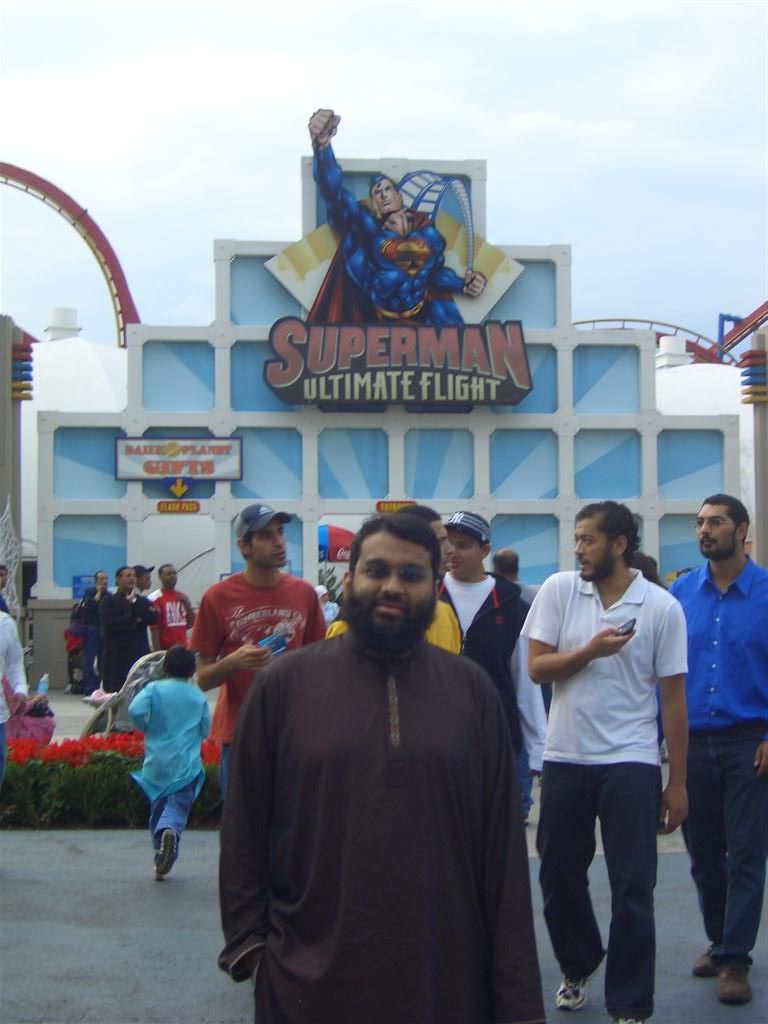 I pushed really hard for Sheikh sahib to join me on Superman, reminding him that since Batman was a better superhero than Superman, the Superman ride couldn’t be as bad as Batman (little did I know). But YQ remained unhinged, using his family and his drive back, as firm excuses to ride carousels and Ferris-wheels…

After several hours at the park, we went off to the Animal Safari, which was okay. They do have quite an interesting selection of wild animals, so animal enthusiasts probably enjoyed it a bit more. In this drive-through park, Muslims did become Muslims. Despite warnings to keep windows closed, I caught many cars with windows wide-open. And I must admit that I had to sneak open my window a few times to get better pictures ;)

After the park, we stopped by a fast-food outlet, to get a short break, and “normal” priced drinks and some nick-nakes for the kids. Here, I was able to get a bit more quality, quiet time with YQ, so I asked him to say a few words of Eid greetings for MM readers, and then used the opportunity to justify his refusal to join me on Superman. The 2-minute interview was great… I think readers would have really enjoyed it. But when I got home and transferred the files, I realized how I am just not meant to be a video-journalist. The camera did not have audio! Unless people want to try to lip-read, I had just done some silent-picture taping!  Okay, really embarrassing, but they don’t teach camera-operations at business schools! By the way, I still haven’t told YQ yet…the first time he will find out about his silent interview will be when he reads this paragraph!

Anyways, after the safari stint, we went back to the theme park. We met Imam Yusuf Islahi, who led the Isha’ prayers as well. We continued to just hang out there, watching YQ enjoying all the kids rides, and all of us devouring more and more food.  We stayed on until the organizers asked us to join the cleaning crew, or to leave. We opted for the latter, and called an end to a great day.

Congratulations ICNA-NJ for a job well-done!

A Message from Shaykh Yasir Qadhi: Join me for Eid at Six Flags!