Sister Muslema Purmel sent the following email to us, talking about the hijab ban and her interactions with French sisters who actually LIVED the ban. The insights of these sisters are invaluable and provide a window into the psychological torment that these “secular”, “free” societies are imposing upon them. What is the difference, I ask, between forcing the hijab ON (as the West constantly whines about) and forcing the hijab OFF the sisters? Where is the freedom of personal choice? Amazingly, these same societies are perfectly fine with a woman aborting her unborn child (its her body, she can do what she pleases, right?), yet this same woman would be scorned, her rights to education stripped, and other indignations imposed, if she puts a piece of cloth on her head. Could there be a better example of morality turned upside-down? [Amad]. Cross-posted @ Streetprophets & SuhaibWebb 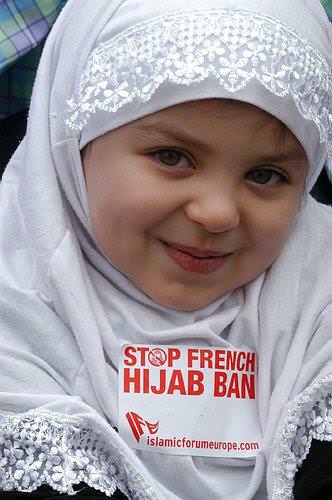 I had the opportunity to meet some French sisters who are now here with me in Cairo, and we got to talking about the issue of Islam in Europe.

It was actually really sad, hard to hold the tears as one sister (from Holland, convert to Islam) told her own story of how she would remove her scarf everyday when she entered work, so she would be left to wear only an allowed small headband just covering the front of her hair, until one day she broke down crying, and kept it on. A few days later, her boss asked her to sign some papers. She asked why, and he said “You’re fired.” She replied, “Allahu Akbar” and signed the papers. “Some scholars said it’s ok, I can take it off if it’s a neccessity, but I just couldn’t take it off another time! I just couldn’t!” she said.

Another sister studied and finished law school before the ban happened. She wanted to be a lawyer and defend Muslim Liberties in France, but now after the hardship getting that degree she doesn’t know if she will ever be able to practice law in France, she is now studying Islamic Law at Al-Azhar. I heard stories of sisters who would break down crying outside the gates of their schools. How a sister in a private Christian school was allowed to wear hijab until parents complained and forced her to remove it. Listening to their stories, I felt like they are experiencing a daily sexual harrassment in order to go to school, go to work, and pay bills. “I feel like someone is telling me to take off my clothes, my underwear, my head is also my private part. But if the girl wants to wear a mini-skirt to school and show everything, no one punishes her. I cannot return to France, I cannot support it.”

She told me about a housewife, who just went to the bank to withdraw money and she was asked to leave and remove her scarf. Now, since a month ago, the hijab ban has spread to some public schools in Holland. As we know it is still a struggle in Tunisia, and Turkey. Are other countries in the world waiting to see how the world reacts so they too can implement hijab bans? As Martin Luther King said, “Injustice anywhere is a threat to justice everywhere.”

I remember there was such an uproar BEFORE the hijab ban became law, and now afterwards, where are those same crowds, those same rallies, and talks? Essentially Muslim women are being deprived of one of their human rights. When does it become OK in the 21st century to require a woman to remove some of her clothes and reveal her body in order to participate in public life? Where are the Muslim men who have gheera (chivalry) towards their women, and want to defend them from such physical harrassment, and psychological humiliation?! One sister compared the non-action with regards to the hijab-ban to the reaction people had toward the cartoons (which understandably upset a lot of people) and some countries excercised boycotts.

What about our sisters in France? How did we forget about this crime that occurs on a daily basis? Where is the body of the ummah that feels pain, when one part of it is hurt?

I’ll be honest, all this time in America, I felt this hijab-ban was a crime, but I never truly felt the pain of these sisters until I heard them tell their stories. The voice that said, “I just couldn’t take it off another time, I just couldn’t.” As a woman who wears hijab, I suddenly felt it- the depth of the crime that has been overlooked. I can’t imagine being in the same situation, my impulses say, “I would rather die first than remove my hijab.”

So I wonder, do any of my French sisters walk around school and work feeling like they’ve been spiritually killed? Are they thinking about ways of “escaping France?” From my conversations with the French sisters, they are struggling to retain their sense of identity and Islamic practice. They had always faced discrimination with hijab before, but this Law has really broken the spirits of many. Some sisters just completely removed the hijab even outside of school because they couldn’t cope with the feelings of living a double-life.

Again where is the heart that aches? Where is the body that rushes to reveal the pain of one of its limbs?

I bear witness as an American Muslim, we have an AMANA because of the freedom and resources that Allah has blessed us with in America, to do something for our sisters in France and elsewhere, where the hijab has been banned. May we not be of those who passed by a people being oppressed, and we could have done something, but instead we just passed by in silence.

Can we do anything for them? Can it be taken to the United Nations? Can we hold a campaign for them? Can we access our media and political leaders? Can we do rallies or lectures? Can we engage this phenomena from an academic level? A civic level? Let’s at least make a duaa, and make the intention to try and help if and when there is an organized effort to help our
forgotten sisters.

What are your ideas?

Post-Script (a followup email from the sister) :

Before I get into the reflection, as an update, there are some responses that occurred from those who recieved the email, that I wanted to share with you as both of you were interested in that: