This story will be updated as more news and images are made available. Last Update 12/29 09:45 EST (towards the end) 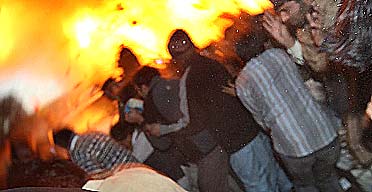 Unfortunate turn of events in Pakistan. Although most decent Pakistanis and Muslims have no love lost for Benazir because of her bondage to the West and her anti-religion stand, there is still no justification for murder and carnage. This is pure terrorism that must be condemned by all, religious or otherwise. If anyone had a problem with her politics, then the proper route is to use one’s pen and mind to argue against her ideology, not use the coward’s strategy of shutting up who you can’t argue with. Violence is the nemesis that will sink Pakistan if people don’t wake up and recognize its evil (both in an Islamic and social sense).

I cannot imagine the Army having a hand in this, though I wouldn’t be surprised if Musharraf didn’t provide the full protect that he himself ensures around himself. In my opinion, Musharraf needed Benazir, but you can never put anything past a desperate dictator. With Nawaz Sharif already barred from the election, does it mean the King’s party is back in business?

What I find as an exaggerated headline: Fears Of Civil War After Bhutto’s Assasination. One fortunate and unfortunate aspect of Pakistan’s history is that the army is strong enough to take over when the going gets rough. Ironically, this may have actually been the RIGHT time to impose emergency, had Busharraf not misused it a few weeks ago to protect his dictatorship. Instead Musharraf has declared 3 days of mourning, great good that will do. What a perilous situation for the dictator!Of course, the Islamophobes are out blaming once again Islam for this murder, such as this article where the author urges the “West to gain some insight into the culture of Islam and, in particular, of the Middle East. What can be easily observed is the abject refusal to take any responsibility for anything done in the name of Islam”. I find it amazing that Islam is put on the docket every time some bad thing happens… soon you’ll be hearing that global warming is being caused by Islam, while the more subtle ones will add that is being caused by “Islamic hardliners”. So, where was the same blame-game in the murder of the Gandhis, or the Kennedys?

There is no doubt that a strain of radicalism exists in Pakistan, but it is being fed by Musharraf’s own policies, like his mass-murder of innocent students in the Red Mosque. Just like our nation’s (USA) foreign policies, like the invasion of Iraq are leading to increased terrorist recruiting (based on our own Intelligence reports), the same sort of thing is happening in Pakistan, where Musharraf’s blanket crackdown (not discriminating between orthodox practitioners and radical militants) is feeding the same terrorist propaganda. This is not a justification for terrorism, rather an understanding of root-causes.

Updates @ 12/28 (17:45):
Apparently, Benazir died of a skull fracture after her head hit the sunroof caused by the bomb shockwave. Not via bomb shrapnel or gunshots. SubhanAllah, when someone’s time is up, no direct hit is required… in fact no hit at all is required.

Here’s a video where you can hear the shots and the blast via CNN. 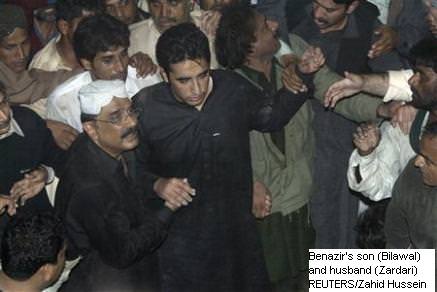 Benazir buried in the mausoleum, where her father is also buried. Tens of thousands attended the funeral. The coffin, draped in her party’s flag, was accompanied by her husband and three children. Attendees chanted anti-Musharraf and anti-US slogans. If that is any indication of where people are pointing fingers, then both Musharraf and US’s image is on the way downhill, as if has much further down to go. I am still awaiting an update on the Karachi situation from my friend. Here is Imran Khan’s reaction to his Oxford friend Benazir’s murder.

No confirmation whether elections will go on. Interestingly, the US is urging that elections go on because otherwise the “terrorists would have won”. What nonsense! The terrorists win MUCH more if you have a farce of an election that reelects the “King’s party” and confirms Musharraf’s dictatorship. And with Benazir dead, and Nawaz boycotting, any elections now WILL be a farce. Right now is a time for putting the brakes on political activity, taking a deep breath, and letting things settle down a bit. A farce election now will also be a violent election.

Rioting and unrest has been reported across the country. [BBC]

I was shopping … In a split second, the atmosphere changed from a bustling shopping atmosphere to that of mass panic. As we were running out of a building filled with small shops, I saw mass amounts of dust in the air and people running all over the place, panicked. More at Freep

Updates @ 22:45: Most transportation systems are severely affected. My parents in Pakistan left at the crack of dawn to travel about 50 miles back to home in Lahore. Things are far worse in Karachi. Today (in Pakistan) is Friday, which means the crowds gathering for Friday prayers. I hope that this day of blessings is not misused for rioting and other unIslamic activities. I got the following from a friend who has been stuck in her office (in Karachi). I have asked her to write more about the ground situation if she gets the opportunity:

i am stuck at office Amad…lots of riot..half of us could not go home…family reached home after four bad hours on the road..i am still figuring out how we will get home… I promise to have something to you by the evening.. right now my head is totally zonked..no sleep…take care!

More on the violence erupting including new updates over the sleeve.

Updates @ 14:45: Nawaz announces boycott of elections, to which I say “good opportunism”. Because there is little chance that the elections will happen as scheduled. Nawaz already squandered semblance of being a principled man when he quit the movement to boycott elections in the first place. A stand that Imran Khan and others honorably kept. A stand to bring back the deposed judges, wrongly removed from office by Musharraf. A stand to inject the mildest of integrity in Pakistani politics. In other news, there have been reports of rioting and other unrest.

As expected, rioting has erupted in parts of the country, and more innocent people have died. What I never understood is how and why a reaction to violence is MORE violence, leading to MORE deaths. What is the fault of shop-keepers, or of hospitals or of public property, or of life and property of other citizens that someone killed Benazir? The Pakistani population needs to calm down… may Allah help the nation. More updates from Dawn:

Update @ 1445: At least 14 persons were killed including 10 Karachi as rioting broke out tonight in several parts of Pakistan… Television channels reported 10 deaths in different parts of Karachi in incidents of firing, looting and setting vehicles, shops and petrol pumps on fire (NDTV)

At least 20 vehicles were torched in Sindh’s second biggest town of Hyderabad. There were also small protests in Rawalpindi and the nearby capital, Islamabad. Protesters blocked roads with burning tyres and chanted anti-Musharraf slogans in Muzaffarabad, capital of Azad Kashmir. Police said they had been ordered to block the main road between Punjab province and Sindh province, apparently to stop the movement of protesters. Disturbances were also reported in the southeastern city of Multan, although details were sketchy. In Lahore, capital of Punjab province, Bhutto party workers burnt three buses and damaged several other vehicles, police said. (Dawn.com Posted @ 22:38 PST) 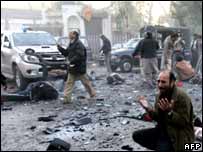 Pakistani opposition leader Benazir Bhutto was killed in a gun and bomb attack after a rally in the city of Rawalpindi on Thursday, her party said. (ABC)

Ms Benazir Bhutto were killed and several others injured in an attack here outside Liaquat Bagh, Rawaplpindi on Thursday (Jang)

”We are traumatised. People all over are crying. Everyone is saying that this Army has killed Benazir. There is going to be more bloodshed. Will the world now finally wake up? said a distraught Asma Jehangir, Chairperson, Pak Human Rights Commission. (NDTV)

Nawaz Sharif was at the hospital and addressed Bhutto’s supporters. Sharif said he “shared the grief of the entire nation” and called on President Musharraf to resign (Guardian)

What would you say to America’s leading Islamophobes if given the opportunity?

The Silencing of Uzbekistan’s voice