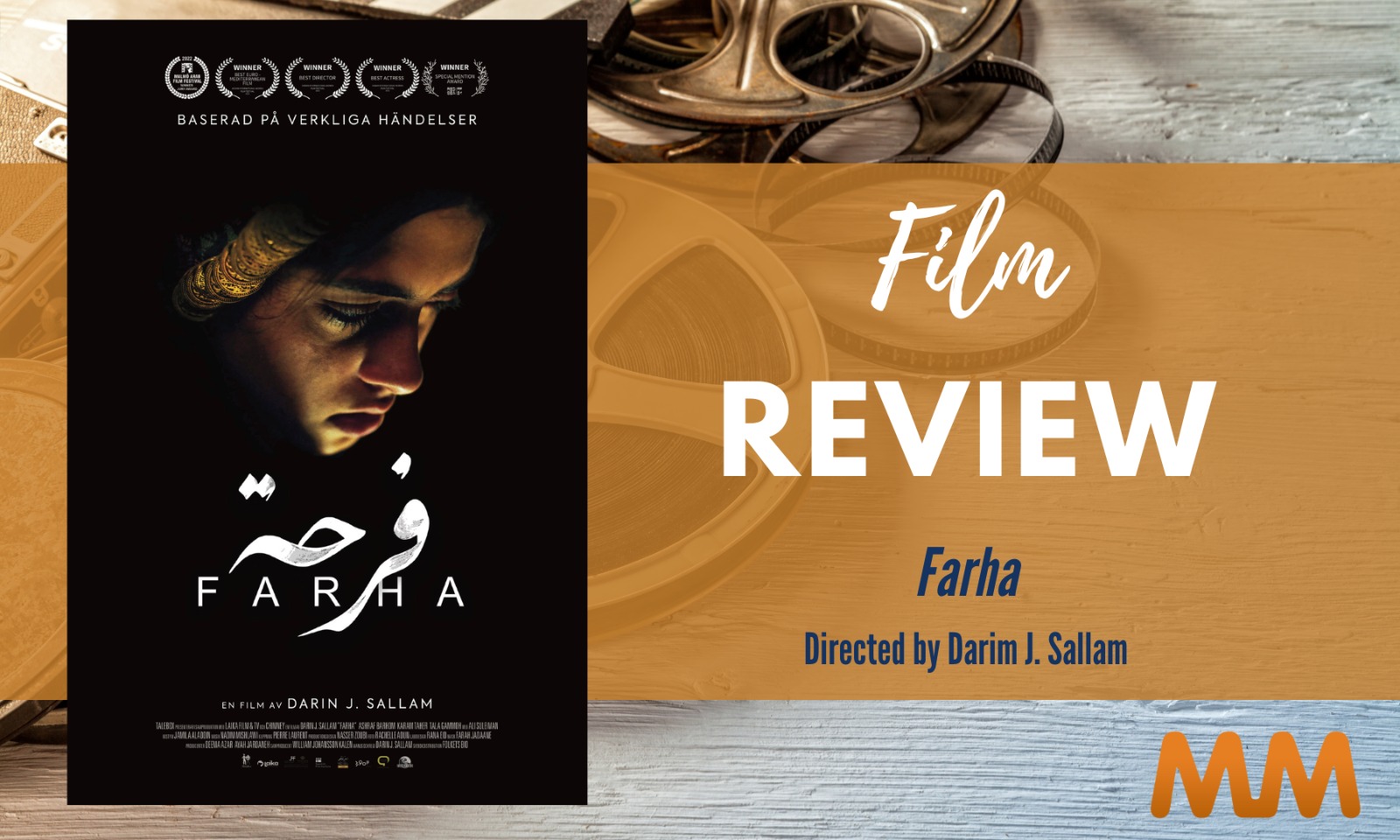 The Nakba, or catastrophe, of 1948 is a seminal event seared in the minds of every single Palestinian family across the globe. All 13 million of us have been personally impacted by the Nakba and its enduring effects until present day. Contrary to the Western media misframing of the Nakba as referring to the creation of the state of Israel, the Nakba actually refers to the systematic, meticulously planned, destruction of Palestinian society by a foreign colonizing power. It refers to the ethnic cleansing, genocide, land theft, expulsion, and murder of our people. Farha, the debut feature film by Jordanian director Darin Sallam, showing now on Netflix, is a remarkable, must-see movie because it is the first time a film on this scale has masterfully narrated this seminal event in Palestinian history. Although the events of the Nakba have been preserved through oral testimonies, written testimonies, books, poems, songs, articles, documentaries, and declassified Zionist archives, it has rarely been shown in film – which has the power to reach the masses.

A Land With A People

Farha is a coming of age story about one young Palestinian girl whose life and dreams were upended when Zionist militias rampaged and destroyed her village. The film is set in an unnamed village, whose opening scene immediately struck me as reminiscent of the chilling remnants of the Palestinian village of Lifta; a visible testament to all who pass it today on the superhighway to Jerusalem. The story is told through the eyes of Farha, a spirited and bold young girl whose name means “joy.” Her name was intentional, Sallam explained in an interview with Time magazine, “I chose the name because of how they talked about their life before the Nakba — to me it was life before their joy was stolen.” In the opening scenes, we get to watch Farha playing with her friends, challenging authority, warding off a pesky boy, and attending a henna party. Sallam deliberately included these moments, stating in another interview, “I want them to see that it [Palestine] was a land with people and that they were living their lives, experiencing good and bad moments, until it was all interrupted.” Through its simplicity, Farha effortlessly dismantles the textbook Zionist talking point of Palestine being “a land without a people for a people without a land.” One particularly compelling aspect of the film is its pace. After Farha is confined to a cellar to hide from incoming Zionist militias, time passes excruciatingly slowly as you feel each moment of her stress, fear, and anxiety. You are invested in learning what will happen next, as you watch even the most mundane of actions become amplified in importance. You feel Farha’s thirst as she attempts to drink from a pickle jar, desperate for water. You feel the tension in her bladder as she desperately figures out a place to urinate. You feel her choking on the smell of the gas used by Zionist militias to clear out Palestinian homes. You feel her panic as she gets her period for the first time. Sallam says she wanted to include these scenes “because it’s natural and it’s what would happen to you or me if we were in her shoes.”

The slow pacing of the film, coupled with the deliberate inclusion of this narrative, creates more opportunity for the viewer to engage in Farha’s experience and contemplate the gravity of what she is exposed to and experiences. It also allows the audience to pay more attention to the details and carefully designed set and props that shows Palestinian life prior to the Nakba. It offers a feeling of realism, as the tension and uncertainty continuously heightens throughout the passage of time.

Sallam skillfully gives the viewer something to think about during the slower moments by sprinkling in harrowing events that Farha witnesses through the cracks in the cellar door. One particularly agonizing scene that broke me, was of a Palestinian family seeking shelter so that the pregnant mother could give birth, only to be discovered by the invading Zionist militias who, after mentally torturing them a bit, executes them at gunpoint, leaving the newborn baby to die. We are then brought back to Farha as she remains witness to the baby’s painfully slow death. We are Farha’s ears as she hears his cries unremittingly fill the air while she attempts to sing him a lullaby as he takes his last breaths.

Farha has, unsurprisingly, come under attack from Israeli officials and Zionist sympathizers. This happens like clock work when any space is given to Palestinian stories. Western discourse on Palestine is heavily saturated by Zionist ideology, which theatrically espouses a false narrative of the past that denies and/or erases the existence of, and well-documented experience of, the indigenous Palestinians. Any other competing narrative, shown through a compelling film such as Farha that reaches the masses, is considered a threat and will naturally become a target of attacks. In any medium that the Palestinian voice manages to break through, whether it be literature, film, media, art, food, or fashion, Zionist sympathizers methodically get to work to try to drown out those voices or prevent them from being heard.

In response to the film’s screening on a major platform like Netflix, Israeli officials predictably went into a frenzy denouncing the film, and an orchestrated effort ensued to downvote its ratings online. Avigdor Lieberman, Israel’s outgoing finance minister, issued a statement saying, “It’s crazy that Netflix decided to stream a movie whose whole purpose is to create a false pretense and incite against Israeli soldiers.” One doesn’t need a fictional representation on film, however, to see real Zionist soldiers violently assassinating Palestinian families. Unlike in the past, where the media heavily filtered what images we were exposed to, all you need to do now is open any social media platform and see an abundance of footage showing the atrocities committed by Zionists against Palestinians. In true supremacist fashion, their fragility centers themselves in the conversation, oblivious to the fact that it’s not the film that makes them look bad, it is their actual actions.

The Power Of Film For Marginalized Voices

I’ve always believed that education is the key to liberation, and education can take on many forms beyond talking or writing. Humans are visual creatures, and sometimes we just need to see it to believe it. I’m sure many Palestinians have probably told their friends, if you just went to Palestine you would understand. All you have to do is see it, no words would be necessary. That is what Farha offers the viewer. You, like Farha, are a witness to the Nakba. You are bearing witness to what is happening around her. No amount of context or spinning could explain away the atrocities or deny what she witnesses.

Film is a powerful medium capable of shifting narratives, raising important questions, and changing opinions. Because of the power that film holds to shift perspectives and evoke empathy, authenticity is of prime importance, particularly for marginalized voices. I think it is safe to say that Palestinians who watched this movie breathed a collective sigh of relief. Farha got it right. It is, in my opinion, one of the very few films about the Palestinian experience that does not perpetuate harmful stereotypes or cater to the Western gaze. It managed to include many facets of Palestinian society, not through an observer’s gaze, but with true cultural authenticity that can appropriately navigate the nuances and accurately capture cultural elements. It depicted various segments of, and issues within, Palestinian society without either orientalizing or over dramatizing them, but also showing how they all collectively experienced the Nakba. Accurately portraying these nuances of Palestinian society through an authentic lens cannot be understated for a historically excluded identity.

Palestinian Stories Will Be Heard

If there is one takeaway from a film like Farha, it is that you can never kill the message of truth. Representation matters, particularly in the fictional world, as the absence of it was coined by the late George Gerbner, professor of communications and pioneer researcher into the influence of television on viewer perception, as “symbolic annihilation.” Film is a particularly powerful medium to symbolically speak this truth, as Sallam explains, “We need to do this because films live and we die.”

Farha is a slap in the face of Zionist propaganda, a loud and clear message that the old will not die, and the young will not forget. We exist beyond the false narratives created about us, and we will continue to persist in spite of them. We had lives. We have lives. These things did happen to us. Thanks to a film like Farha, it is time that the world bears witness to it.

– The Importance Of Palestinian Stories [Interview]

Podcast: Beyond The Matrix – Masculinity And Modesty In Islam | Imam Tom Facchine

Rifk Ebeid is a Palestinian writer and human rights advocate. She has a JD from George Mason University, an MA in Human Rights Studies from Columbia University, an MA in Speech-Language Pathology from the University of Northern Colorado, and a BA in Political Science from the University of Florida. Rifk has worked extensively in the field of human rights and media advocacy with various international human rights organizations and is currently working as a pediatric speech-language pathologist. She is also the debut author of a one-of-a-kind children's book in English about Palestine entitled: "Baba, What Does My Name Mean? A Journey to Palestine.