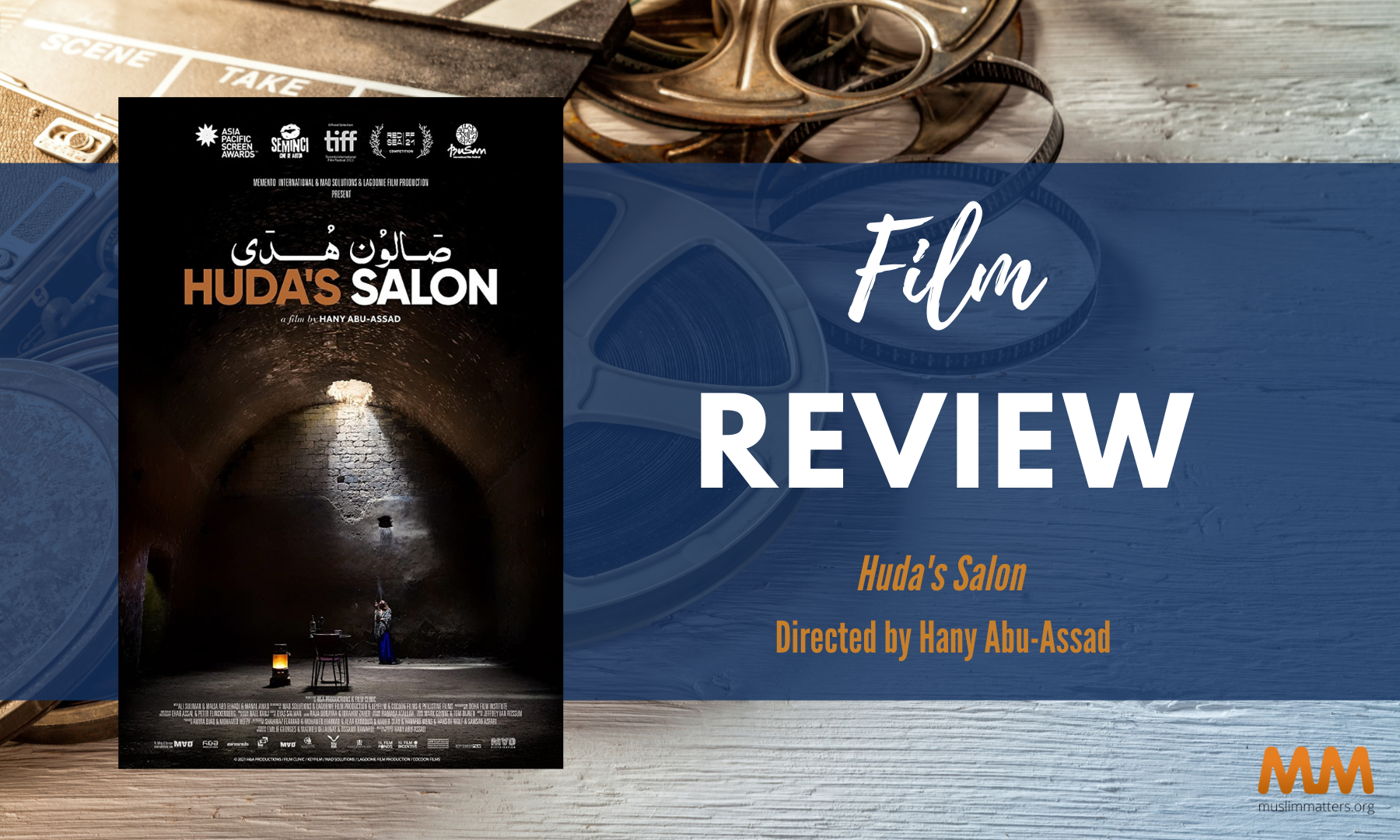 [Disclaimer: MuslimMatters was informed by the author that the film Huda’s Salon contains scenes with full nudity. This review was approved for the purpose of important wider discourse, and should not be considered an endorsement by MuslimMatters]

Hearing Palestinian stories told directly by Palestinians is not only important, it is necessary. But Huda’s Salon, the newly released film written, directed, and produced by acclaimed Palestinian filmmaker, Hany Abu Assad, fell short of expectations or hope. On the surface, the film attempts to address the multiple layers that impact the lives of Palestinian women, but these layers felt overshadowed by orientalist characterizations of Arab societies as hotbeds for patriarchy and misogyny. The severe impact of the Zionist occupation of Palestine on Palestinian women takes a backseat and is rendered essentially invisible.

Huda’s Salon is a suspenseful thriller about a young Palestinian mother, Reem, whose seemingly benign trip to the hair salon suddenly takes a dreadful turn. Huda, the salon owner, secretly drugs Reem and takes her into a back room where we find a strange man anxiously waiting next to a bed. The audience is then forced to witness Huda fully undress Reem, baring her completely naked body, while the man, also shown fully naked, lays next to Reem in a series of provocative poses. Huda snaps some Polaroid shots to blackmail Reem into becoming an informant for the Zionist occupation. The rest of the film follows Reem as she operates in a daze, all while trying to deal with her daily responsibilities, young infant, and jealous husband and family. Huda, the salon owner, is “caught” and interrogated by unidentified Palestinian men from an assumed resistance group.

Hearing directly from indigenous voices is important because it can offer the viewer a sense of authenticity in the experience being depicted. In this film, though, it felt like the only truly authentic representations were seen in minor details in the props, sounds, and surroundings. The film’s overall messaging, however, quickly eviscerated any sense of authenticity through its heavy reliance on assumptions and stereotypes of Palestinian society. Abu Assad explains his motivation for the film as wanting it “to begin a conversation about why we punish the weak and not the strong.” Yet, in a scathing line from the film, one of the characters says, “It’s easier to occupy a society that is repressing itself.” This message, to me, sounds a lot like punishing the weak, or victim blaming. Social issues, like gender inequality or patriarchy, cannot be addressed in the absence of the Zionist occupation. They are intertwined. If the single most reality that impacts every facet of Palestinian life is rendered invisible, what is the intent of the film? What message does it aim to spread about the Palestinian experience? The impact that the occupation has on women’s rights – from poverty and economic dependency, to political violence and instability – is a key factor in determining how to dismantle patriarchal structures and empower women. Without highlighting this reality, Abu Assad completely misses a necessary component of the very discussion he seeks to have on women’s rights.

A closer look at Abu Assad’s film history reveals that he tends to tell Palestinian stories for a Western market, centering his narratives around suicide bombing, collaborators, illicit romantic affairs, or gender inequality. In Huda’s Salon, specifically, the storyline does not offer much beyond superficial and predictable dialogue. Abu Assad tries to weave in too many individual stories, alternating back and forth between each character, not allowing time for the viewer to establish a connection to any particular storyline. Although he asserts that he made this movie for his “home audience,” this film was not made for Palestinians. The storyline is neither new nor insightful, and only serves to further emphasize Palestinian pain with no end in sight. It felt, quite simply, like predictable trauma porn made for a Western audience.

The Issue of Nudity in the Film

The inclusion of full nudity in the film also raises questions about his intent and motivation. In reference to the nude scene, Abu Assad says, “I will most probably cut that scene when I show it to a Palestinian audience. For the simple reason that it will deviate the discussion away from sexual exploitation to why did I show her naked, and it’s not the issue.” If the intention of the film was to start a discussion inside Palestinian society about female exploitation, why censor the very scene that he characterizes as “brave” and a witness to his time?

Art is often viewed as an interpretation of social conditions and current events. The role art has historically played in impacting society’s values cannot be understated. How does Abu Assad’s film reflect Palestinian culture when he himself feels the need to censor it from his own people because he knows it will offend their sensibilities? The vast majority of Palestinian society is Muslim and will find this scene outrageously offensive. Palestinian society as a whole, both Muslims and Christians, holds moral value in high regard. Whose culture, then, does Abu Assad’s art reflect? What values are Abu Assad trying to promote? The artistic choice in the film seems more about catering to a non-Arab audience and challenging moral limits, rather than genuinely addressing social issues affecting Palestinian society. It masks concern for women in a veiled attempt at eroding the morals and values of the very society which it claims to depict.

Nudity in film is a product of a patriarchal system, regardless of the intent of the nudity. The irony of this film is that it aims to challenge exploitation in Palestinian society, yet also takes part in that same exploitation. Asking the female lead in a film to be fully nude is a form of exploitation itself. Intent does not erase impact. Abu Assad asserts that “nudity is often used in cinema as flirtation, here it’s a crime. It’s the opposite of arousing.” The crime depicted in this film is problematic, however, because it is deployed as a narrative device that exploits women for shock value to elicit audience attention and curiosity. The audience is forced to watch a Palestinian woman being victimized for the sake of a plot point.

Self-introspection, criticism, and discussions about societal ills are all necessary components of affecting change within a society. Those who take on that challenge must tread cautiously, taking into account the enormous role the existential threat facing the population they are criticizing plays in impacting their capacity to change. For any Palestinian creative engaging in trauma porn and deeming it “necessary,” they must ask themselves: necessary for whom and why? Is Huda’s Salon necessary for Palestinian society? What did it do to truly help Palestinian women, other than to exploit their trauma for the sake of the Western gaze and higher ratings? Patriarchal cultures, gender inequality, and other social liberation issues cannot be discussed in the absence of highlighting the Zionist occupation and its suffocation and destruction of the Palestinian social fabric.

Coming from a filmmaker who has been lauded as the “premier cinematic spokesperson for his people’s plight,” I was hoping for something more, something beyond the standard depictions seen today in film, literature, and media about Palestinians. We deserve better stories that center our resiliency, agency, and steadfastness in the face of one of the most brutal regimes in the world. Huda’s Salon sorely missed the mark.

– 200 Years Of Orientalism: From Mary Shelley To Khaled Hosseini

– Palestine And The Muslim Millennial Consciousness

From The Chaplain’s Desk: Preparing For Ramadan On Campus

Rifk Ebeid is a Palestinian writer and human rights advocate. She has a JD from George Mason University, an MA in Human Rights Studies from Columbia University, an MA in Speech-Language Pathology from the University of Northern Colorado, and a BA in Political Science from the University of Florida. Rifk has worked extensively in the field of human rights and media advocacy with various international human rights organizations and is currently working as a pediatric speech-language pathologist. She is also the debut author of a one-of-a-kind children's book in English about Palestine entitled: "Baba, What Does My Name Mean? A Journey to Palestine.