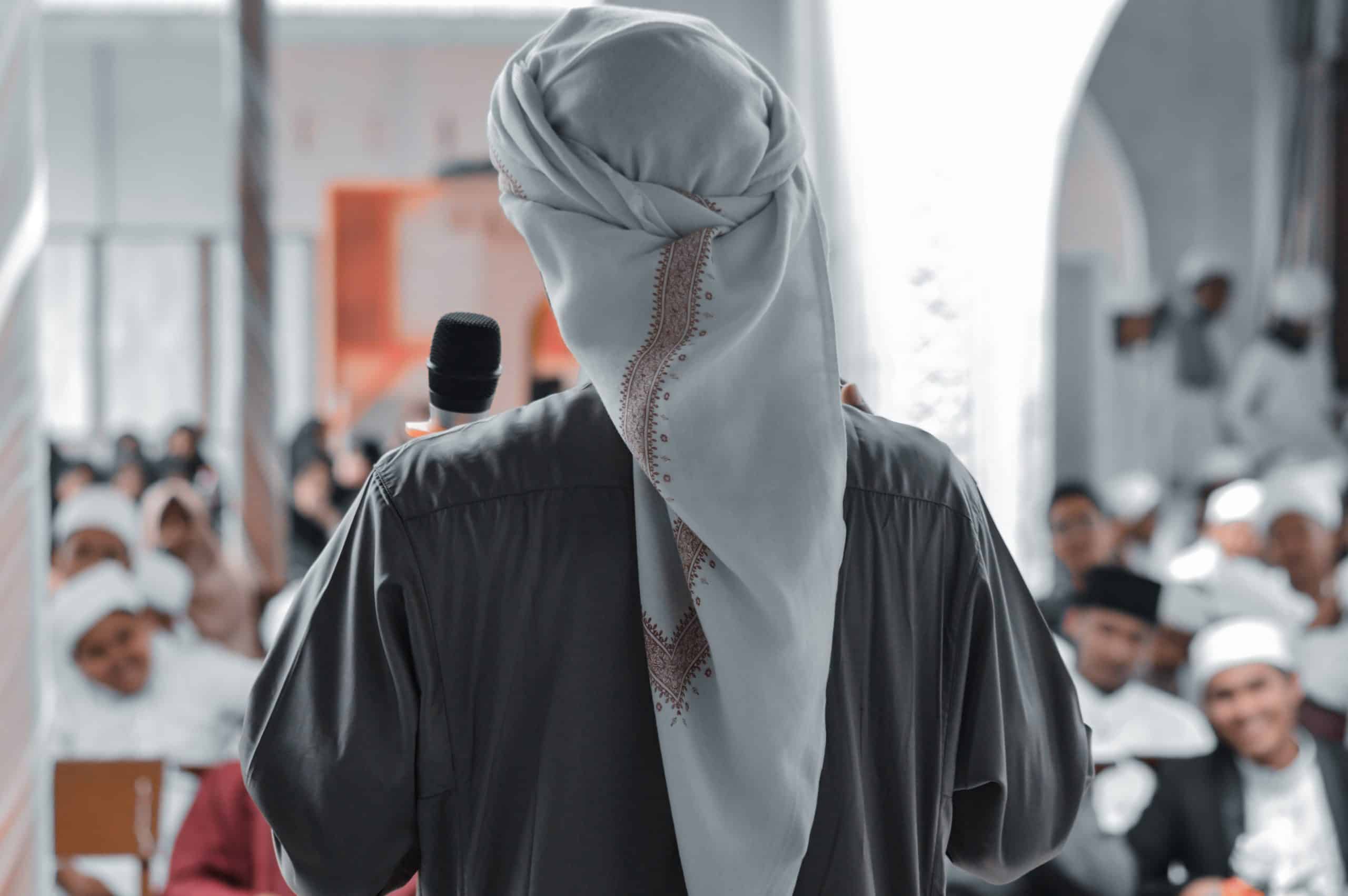 LET ME START with this statistic: By 2050, it’s predicted Muslims will be as high as 18% of Britain’s total population, rather than the 4.5% that they currently are.

With such numbers, this alone imposes on us the urgent task of evolving a socially and politically relevant, and theologically-authentic, set of leadership challenges that are only now beginning to be thought of and fleshed out by us. Given liquid modernity’s many boundless hurdles, given also the growing tide of Islamophobia -whatever that might precisely mean-, and given the uphill nature of reconnecting an angst-filled and stressed humanity to the All-Compassionate Source of Peace, any Muslim leadership role —for the love of God, and for the love of what people each have the potential to become— has a mammoth task before it.

Despite there not being a clergy, Muslims do generate religious leaders and leadership. These tend to be scholars who head the growing religious seminaries and institutions, less by appointment from above and more via earning the trust and confidence of the community in which they operate. In this way, some achieve significant levels of influence and eminence in a community that still holds great stock in the message and directives that come from mosque pulpits and fatwa committees. (As for the social media da’i or influencer, all too often unknown to their real-time communities or absent from the service to such local communities, it’s not yet clear how much leadership traction they have beyond sensationalist rhetoric, stoking up controversy, or being passing fads)

But the whole enterprise isn’t without its problems or downsides, of which I’d like to touch upon a few. My remarks are more descriptive than they are prescriptive. They are also offered in a spirit of concern about the crisis of confidence we’re seeing towards Muslim scholars and their leadership.

Some of these causes have to do with Muslims scholars themselves, some with the changing reality of lay people and learning. On the whole, though, the creeping mistrust is due to a mixture of both.

The trust and confidence ordinary Muslims have always shown the ‘ulama class has to do with the fact that the scholars were expected to be faithful guardians of sacred knowledge and faithful teachers of the prophetic legacy. “The scholars are the inheritors of the prophets,” one celebrated hadith states.1Abu Dawud, no.3641; al-Tirmidhi, no.2683. It has supporting chains that strengthen it, as stated by Ibn Hajr al-‘Asqalani, to yield a final grading of hasan. See: Fath al-Bari (Egypt: Dar al-‘Alamiyyah, 1434H), 1:245. If a scholar were to betray this legacy by introducing new forms of worship or liturgy into the ritual prayer, pilgrimage or fasting, for instance, such a scholar will meet the ire of the lay people who will mistrust him and shun his sermons. The scholar is trusted not to pervert time-honored acts of worship underscored by a scholarly consensus.

As intellectual attacks on Islam increase, as universal literacy gets closer to the horizon, and as today’s educated, professional lay people are not as uninformed as lay people of pre-modern times, there’s a need for intelligent, articulate, Islamically-rooted teachings — particularly in terms of rational coherence, scientific literacy or liveable relevancy. When ‘ulama are unable to meet such a need, this continues to be one of the primary reasons for a crisis in confidence in Muslim scholarship — a crisis that has plagued this ummah for a century, and one that has turned many a young intelligent Muslim mind from the religion or religious observance.

Not to ignore the elephant in the room, one of the biggest drivers of this crisis is scholars who are, or who are perceived to be, under the thumbs of governments and tyrant regimes. How on earth are the lay people expected to trust scholars whose integrity is compromised, at best; and corrupted, at worst? In fact, there’s no swifter way for the scholars to bring discredit upon themselves than to biased-ly declare –especially if no declaration is called for– that such and such political ruler or regime is pious or wicked, Islamic or un-Islamic. For a scholar to enter upon a ruler and flatter him, or heap upon him exaggerated platitudes, isn’t really the conduct of a godly Muslim; let alone a scholar. Ibn ‘Umar

relates that he was once told: “We enter upon our rulers and say to them things contrary to what we say when we leave their presence.” To this, Ibn ‘Umar

Regime-written or state-sanctioned khutbahs is a similar concern. And while it doesn’t lead to the same level of crisis as the above, such a state-driven Islam further impresses upon the public the notion that scholars aren’t fit for purpose and that they ought to look elsewhere for untainted religious guidance. In this, as with the above, such government-tainted scholarship only drives people to the murky realm of internet-Islam and social-media savy extremism, fake-scholarship, or DIY preachers. The religious anarchy unleashed because of this is probably the gravest crisis the ummah is now threatened by. The Prophet ﷺ warned: “God does not take away knowledge by wresting it from the hearts of men; but He takes away knowledge by taking away the scholars. Thus when no scholar remains, people take the ignorant as leaders who, when asked give fatwas without knowledge; they are misguided and misguiding.”3Al-Bukhari, no.34; Muslim, no.2673.

The Paradox of a Person’s Own Ignorance

Another huge cause for the loss of trust in Muslims scholars boils down to what’s known as the Dunning-Kruger Effect — being ignorant of one’s own ignorance. Today, especially on social media, we see droves and droves of people who are observant, practicing Muslims who believe they know what they’re talking about, when they actually do not. Such people might know a thing or two on an issue, but are ignorant of ten others; yet due to being too full of themselves, they are blind to this fact. Overestimating their own infantile Islamic learning, such people who have not formally studied the Islamic sciences, and have no Islamic qualification, take serious issue with scholars where no issue need be taken. They hear scholarly views that are different from what they think they know, and this becomes a justification to accuse the scholars of deviation or falsehood. Their lack of any serious learning blinds them to the rich diversity of views in Islamic scholarship, and the juristic or theological nuances at work.

The early nineteenth-century Yemeni scholar Imam al-Shawkani spoke of this fitnah when he described the three categories of people in regards to religious learning: There are the seasoned scholars who know their stuff pretty much inside out; then there are ordinary lay Muslims who just get on with life. Between the aforementioned are those in the middle; many who think they know, but they do not. He writes of the third case:

“The middle category is the source of evil and is the root cause of fitnahs arising in the religion. They are those who aren’t seasoned in knowledge, such that they rise to the level of the first category. Nor do they forsake it [i.e. sacred knowledge] so as to be of the lowest category. They are those who, when they see one of those from the highest level say something which they are not acquainted with, and which contradicts their belief in which they fell short, they fire arrows of accusation at him and hurl all sorts of insults at him. They also corrupt the fitrah of the lowest level [the masses] from no longer accepting the truth, by veiling falsehood. By this, they establish religious fitnahs on a firm footing.”4Al-Shawkani, al-Badr al-Tali‘ (Cairo: Dar al-Kitab al-Islami, n.d.), 1:473, citing the words of ‘Ali b. Qasim with much approval, saying: ‘This is the meaning of his words which I heard from him; and he has spoken the truth. For whoever ponders them will find it to be so.’

And this source of evil is very much what we see amplified thousands of times over today, on social media. The upshot of this fitnah, and the other reasons which feed into this crisis of confidence, surely bodes ill for our ummah, unless tawbah is made and serious steps are taken to mitigate or mend the widening rift. And Allah’s

– Scholars, Speakers And the Culture of “Edu-Tainment” Part 1

Scholars, Speakers And the Culture of “Edu-Tainment” Part 1

– The Ethics of Muslim Charisma | A Proposal for Leadership Standards

The Ethics of Muslim Charisma | A Proposal for Leadership Standards

Getting Your Family Onboard: You Found “The One” In Your MSA [Part 2]