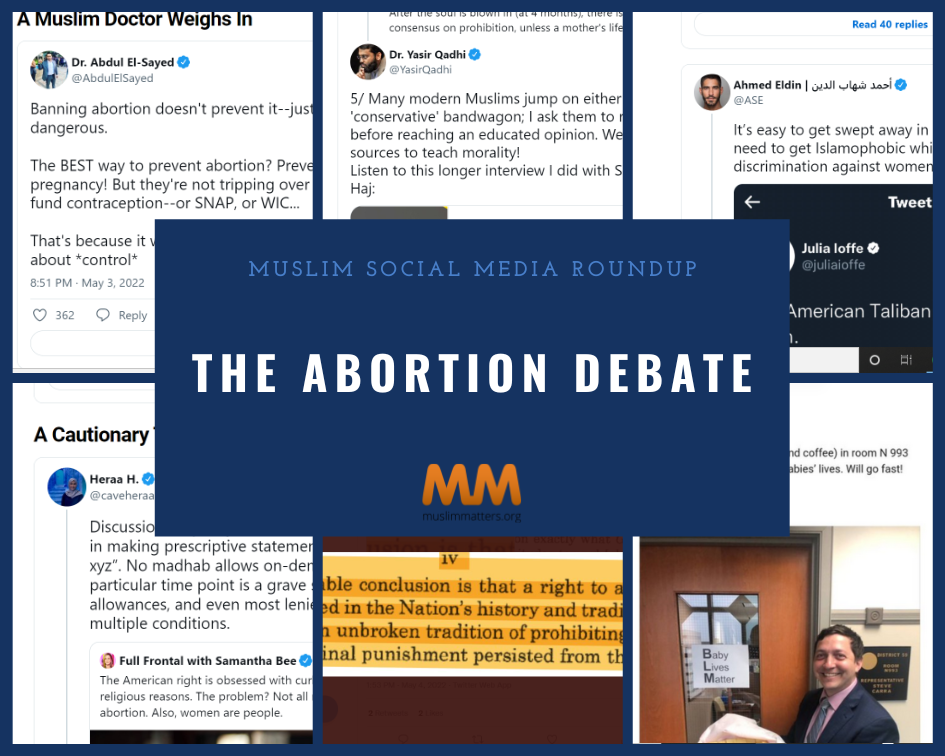 With the abortion debate once again sweeping headlines across America – and the Internet – the Muslim community, both online and offline, has also found itself mired in confusion. What does Islam actually say about abortion? Can Muslims be “pro-choice” when it comes to the law of the land? The Muslim Internet has many opinions to share, with a wide variety of perspectives.

We will be sharing some of these perspectives below, as well as providing links to some scholarly resources on the topic.

– A Muslim Doctor Weighs In

The BEST way to prevent abortion? Prevent unwanted pregnancy! But they’re not tripping over themselves to fund contraception–or SNAP, or WIC…

That’s because it was never about “life.” It was always about *control*

I love how Justice Roberts believes that the *leak of* the opinion was a “singular and egregious breach of that trust,” but not the opinion itself from 3 justices who each testified before the Senate, under oath, that they wouldn’t overturn Roe.

Women will die because of this. And this dude’s serving buttered biscuits. https://t.co/L79VCLcIRJ

To appreciate the depths of the hypocrisy here, remember that the people celebrating the end of Roe—trying to force women to carry pregnancies to term, often against medical advice—were screaming “my body, my choice” about the inconvenience of wearing masks in a pandemic.

Discussion on policy aside, we should be fastidious in making prescriptive statements like “Islam says xyz”. No madhab allows on-demand abortion, after particular time point is a grave sin barring specific allowances, and even most lenient position has multiple conditions. https://t.co/w5W8kAvDUu

It’s another disservice to invoke authority when otherwise one is opposed to scholarly authority – not on certain opinions bc of evidence or usūl, but to align with modern slogans about sexual freedoms.

theyre finally getting it https://t.co/pnkPuxzUfY

– A Call to Nuanced Reflection

We cannot be so fearful of nuance that we wrongly attribute motivations like lenience, pandering, opportunism to a simple presentation of truth. Islam isn’t pro-life or pro-choice, and thinking about the topic in those terms shows we’re still playing someone else’s game. https://t.co/cw0q43mWO0

If you want to advocate for a side because you think it’s the best political strategy for Muslims, do your thing, but you’re in the realm of politics now, not religion. From the religious side, both are problematic & neither represent Islam. That’s not “lenience” or “pandering.”

One of the key arguments included in the leaked opinion to overturn #Roe and Casey is that criminalizing abortion is part of American history, predating to the colonial period. Americans have to grapple with their own violent history, rather than using Islamophobic comparisons. pic.twitter.com/MxFu2xlD2r

Not so friendly reminder to keep shari’ah out of your mouths right now. This ain’t got nothing to do with Islam or Muslims. This all good old patriotic white American evangelical fascism. Grown right here. Like Dennis Edwards said, don’t look any further.

Using Islam in the abortion debate (from either side!) is grossly reductive and Islamophobic. The sentiment has been either “omg this is sharia law” or “even Islam allows abortion.” Two sides of the coin. Both problematic.

Leave Islam & Muslims alone. This one is on you.

It’s easy to get swept away in emotion. But no real need to get Islamophobic while reacting to discrimination against women. pic.twitter.com/aV6OeH9hKz

2019: Gets paid $50k to speak at the largest Islamic conference in America.

2/ Our religion (and hence our morality) demands a higher level of academic integrity than just going with the flow. I advise anyone who wishes to comment from an Islamic perspective to first do some research before speaking on behalf of the faith on such a sensitive topic.

4/ It is the medical and mental well-being of the mother that is taken into account for such a decision, not one’s finances or inconvenience.
After the soul is blown in (at 4 months), there is near unanimous consensus on prohibition, unless a mother’s life is in clear danger.

5/ Many modern Muslims jump on either the ‘liberal’ or ‘conservative’ bandwagon; I ask them to read & research before reaching an educated opinion. We have our own sources to teach morality!
Listen to this longer interview I did with Sh. Dr. Hatem el-Haj:https://t.co/UqjWuBoskB

Maybe the answer to “Pregnancy isn’t affordable” isn’t “abort fetuses” but actually lowering healthcare costs and accommodating parents in the workforce?
Abortion seems to be another symptom of vapid capitalistic culture. https://t.co/8lbcCfMrbj

Podcast: My Miscarriage And Healing Afterwards

Eid Gift: Excerpt From ‘When The Stars Prostrated’