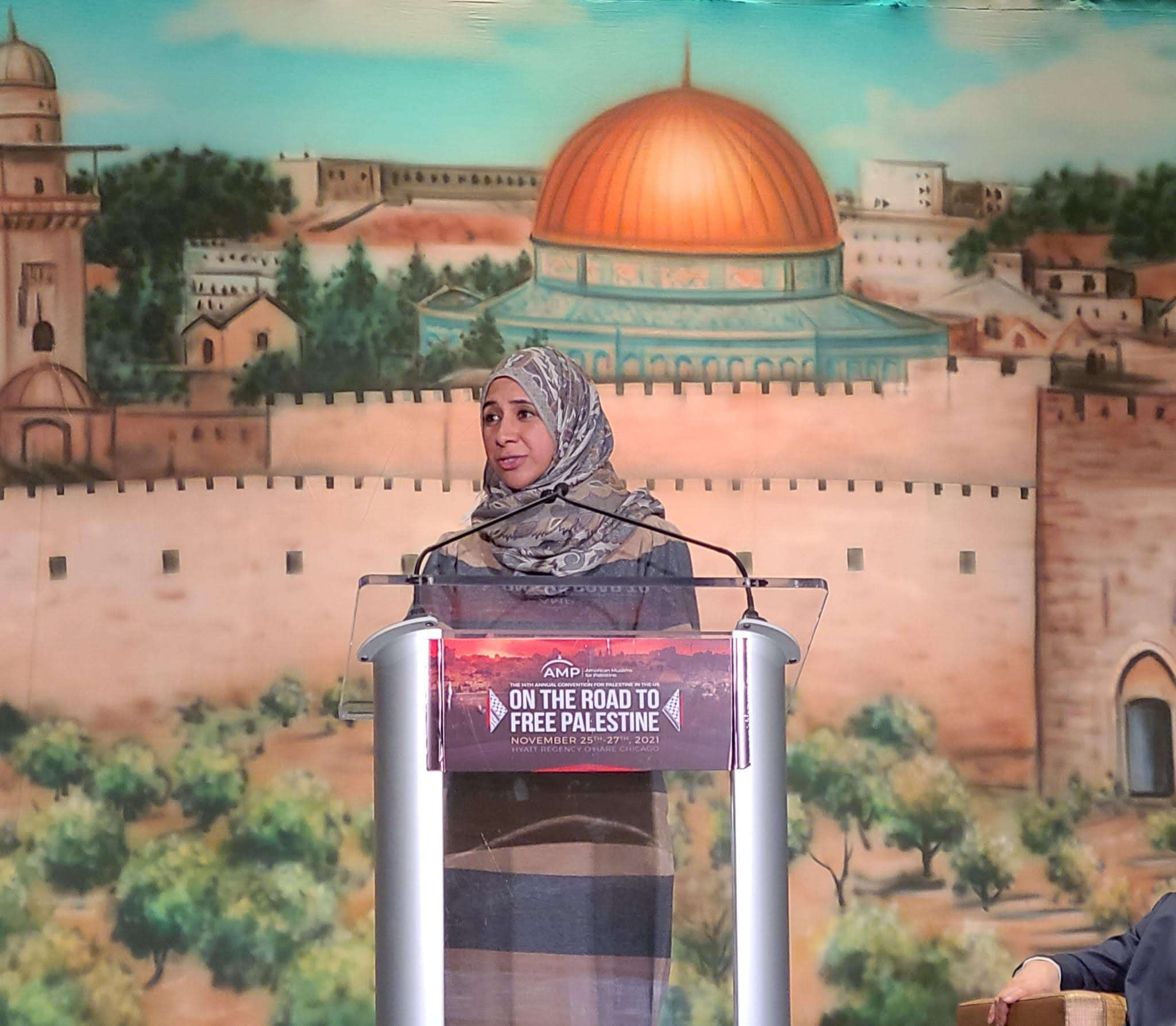 Throughout my career as a Muslim civil rights attorney, I have worked on areas of common concern with my Jewish neighbors. Together, we have advocated for human rights here and abroad. We have stood up against police brutality, racist immigration policies, and illegal discrimination. We have called out racism and bigotry, including the interrelated threats of Islamophobia and anti-Semitism. I will always raise my voice on these important issues, God willing.

In this vein, I have also vocally spoken out against other forms of hatred, including the anti-Palestinian racism institutionalized by the Israeli government and enabled by my own tax dollars. That’s what I did at American Muslims for Palestine’s national conference in Chicago last year.

During the event, I spoke on a panel about how and whether American Muslims who support Palestinian human rights should engage in interfaith collaboration with organizations and individuals that explicitly support Zionism as practiced by the Israeli government.

This question has been a source of intense and increasing discussion within the American Muslim community in recent years. Why? Several reasons.

Over the past several decades, the Israeli government’s human rights abuses against Palestinians have continuously escalated. Bombing civilians in Gaza with precision-strike missiles and shooting protesters at the border using sniper rifles. Raiding Al-Aqsa Masjid and attacking worshippers, even during Ramadan. Expanding illegal settlements and enabling settler violence. Rejecting a Palestinian state and taking steps to make a two-state solution impossible.

To make matters worse, many organizations here in the United States work to preserve the status quo of U.S. support for Israel by, among many other things, smearing critics of the Israeli government as anti-Semites (while embracing real anti-Semites like Donald Trump, Pastor Robert Jeffress and Reverend John Hagee, because those bigots support the Israeli government).

These hypocritical anti-Semitism smears have been launched against everyone from former president Jimmy Carter to the late Archbishop Desmond Tutu to Professor Angela Davis to actress Emma Watson to Human Rights Watch, to most recently, Amnesty International.

But Muslims who support Palestinian human rights—especially Muslim women—face particularly virulent attacks. Just ask yourself why Rep. Ilhan Omar and Rep. Rashida Tlaib attracted so much hostility from the moment they started their political careers while supporting essentially the same policies that Rep. Andre Carson and Rep. Betty McCollum support.

All of this begs the question I was addressing in Chicago: should American Muslims who support Palestinian human rights continue attempting to collaborate with the very same organizations that are enabling human rights abuses against Palestinians?

Many Muslim activists tried to do so for years. They worked to build interfaith ties with their neighbors even if they supported the Israeli government’s misconduct. In fact, some Muslims formed partnerships and coalitions with notoriously anti-Palestinian, Islamophobic organizations in the name of interfaith dialogue. It didn’t work.

Interfaith dialogue didn’t change the minds of anti-Palestinian organizations, nor did it protect the Muslim community from their Islamophobic attacks. Things have only gotten worse. Just last month, we learned that an anti-Muslim hate group that has received significant funding from major pro-Israel foundations had spent years using paid spies to target Rep. Keith Ellison and nearly every major American Muslim organization for the benefit of the Israeli government.

In Chicago, I shared my own answer to the question. In my opinion, no. American Muslims should no longer engage in collaboration with individuals, organizations or houses of worship that continue to overtly support the Israeli government’s racist system of oppression.

Muslim student activists should not work with Hillel, which has repeatedly smeared Muslims and Palestinians on college campuses, sought to censor activist voices, and even hosted Israeli soldiers at school events despite the war crimes committed by the Israeli Defense Forces (IDF).

Muslim civil rights activists should not work with the ADL, especially after dozens of progressive organizations founded and joined the #DroptheADL campaign due to the organization’s long history of harming Black, Brown and Muslim people: supporting South Africa’s partnership with Israel by spying on Black anti-apartheid activists, joining anti-Muslim hate groups in opposing Park51, smearing mainstream Muslim leaders and groups, supporting illegal state laws that punish Americans who boycott Israel, embracing the Trump Administration’s anti-Palestinian policies, and standing by a man who referred to Arabs as “filthy.”

Although local mosques should absolutely continue partnering with local synagogues, they should not partner with any houses of worship that explicitly and actively support the Israeli government’s human rights abuses.

And while I oppose engaging with organizations that defend and enable Israel’s occupation and apartheid against Palestinians, in my speech, I also praised the many principled voices within the Jewish community who continue to advocate for human rights and equality, such as those with Jewish Voice for Peace and If Not Now.

. In fact, it was the Muslim caliph Omar

who lifted the Byzantine ban that kept Jews from the city when he took control of Jerusalem, ensuring that Jews would be able to return, live, and worship in the holy city for the better part of 1,400 years. While Jews in Europe faced pogroms, blood libels and forced conversions, Jewish communities in Muslim lands were more often than not welcome and protected in keeping with Islamic teachings about the importance of protecting of religious minorities.

In modern America, our communities have also faced the shared challenge of dealing with bigotry and racism. We have repeatedly stood together in mutual solidarity against numerous acts of violence, including the anti-Semitic attacks on the Tree of Life Synagogue and the recent hostage-taking terrorist incident at the Congregation Beth Israel synagogue in Texas.

Bottom line: American Muslims should continue working with any organizations, houses of worship, and activists on issues of shared concern so long as everyone involved supports justice for all people.

As for the fundamental debate around Zionism, I personally agree with the growing number of Jewish activists, scholars, and faith leaders who believe that no ethnic group has the right, by virtue of their race, heritage or ethnicity, to forcibly dislodge a different group of people from their homes, oppress those who remain behind, and enshrine racist policies in law.

Right now, a Jewish-American who is an atheist can freely travel to Israel, seek citizenship, acquire the right to vote, live on an illegal settlement in the West Bank, and abuse nearby Palestinians with impunity. But an elderly Palestinian-American who actually believes in the God of Abraham, and who was violently expelled from the West Bank as a child, cannot freely return home, much less attain citizenship, vote, or return to his family’s land.

The Israeli government’s understanding of Zionism teaches that this race-based system is perfectly acceptable, but I, my community, and many Jewish thinkers and groups, believe that it is fundamentally wrong. That’s my opinion and I am working to share it with you because my faith teaches me to speak against oppression, even at the risk of personal harm.

For years, right-wing extremists, anti-Palestinian racists, and Israel advocacy organizations who are terrified by the sight of an American Muslim woman calling out the Israeli government’s human rights abuses have smeared and lied about me. I have faced a barrage of bigoted messages, death threats and dishonest attacks, especially in the past few months.

I appreciate everyone who has defended me from these smears, especially my friends and partners in the Jewish community. I see you and I appreciate you. You didn’t have to step in to protect me or counter the lies. I appreciate you for doing so.

Despite the lies that have been told about me, I remain just as committed to standing up against the Israeli government’s racist apartheid system and all forms of bigotry, including both Islamophobia and anti-Semitism.

The harm I have suffered through the bigotry of anti-Muslim and anti-Palestine activists is a fraction of what Palestinians experience daily. My discomfort is the least I can undertake to mitigate the harms my tax dollars cause.

Related: Zahra Billoo Responds to the Women’s March Inc. Voting Her Off the New Board

The Purpose of Hijab: Reclaiming The Narrative

Zahra Billoo is a civil rights attorney and the executive director of the San Francisco Bay Area chapter of the Council on American Islamic Relations (CAIR). In this capacity, she leads the oldest CAIR chapter in the country, serving the Bay Area’s 250,000 Muslims. Zahra is frequently seen at mosques and universities facilitating trainings and workshops as a part of CAIR’s grassroots efforts to empower the American Muslim community and build bridges with allies on civil rights issues. Zahra also provides direct legal services for victims of law enforcement targeting and Islamophobia. Her work has been highlighted in local and national media outlets including the Christian Science Monitor, KTVU, MSNBC, NPR, and the San Jose Mercury News. Zahra is a 2014 recipient of the National Lawyers Guild San Francisco Bay Area Chapter’s Unsung Hero Award and a 2013 recipient of the South Asian Bar Association of Northern California’s Trailblazer Award.