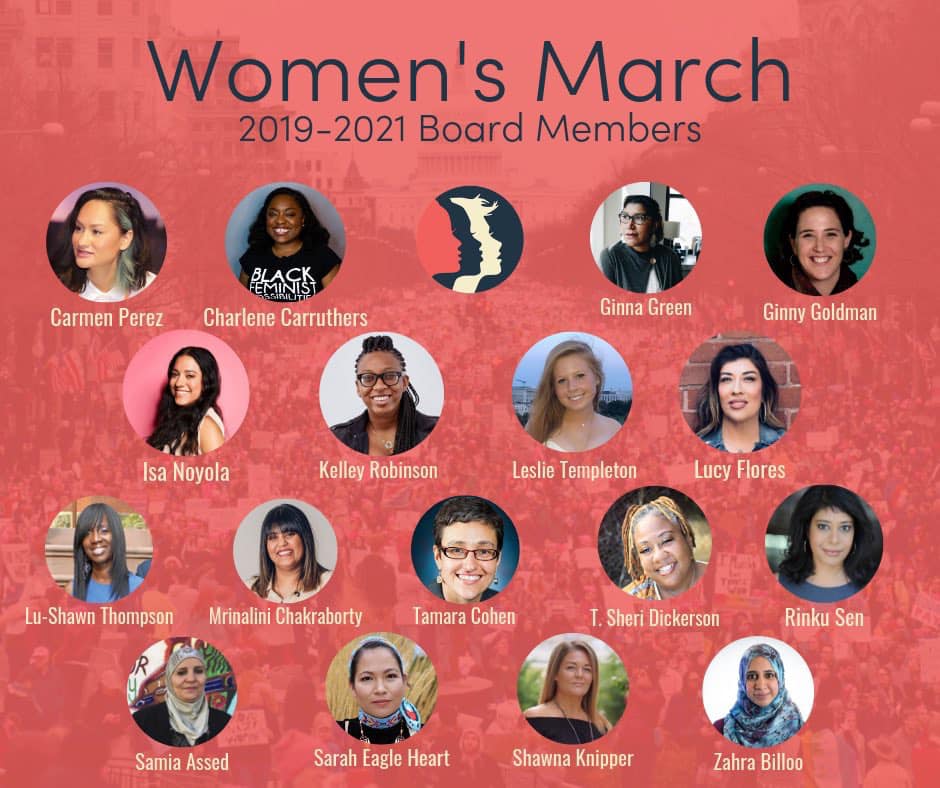 Earlier tonight, I was voted off the Women’s March, Inc. national board. This followed an Islamophobic smear campaign led by the usual antagonists, who have long targeted me, my colleagues, and anyone else who dares speak out in support of Palestinian human rights and the right to self-determination.

The past 48 hours have been a spiral of bad news and smear efforts. Part of the smear campaign is motivated by opponents of the Women’s March, because the organization has traditionally challenged the status quo of power and white supremacy in our country. However, much of the campaign is driven by people who oppose me and my work challenging the occupation of Palestine, our country’s perpetuation of unjust and endless wars, and law enforcement operations targeting the American Muslim community.

The Women’s March, Inc. is an organization I once held dear. I spoke at the first march, spoke at regional marches every year after, spoke at the convention, participated in national actions including the original Kavanaugh protests, and worked to mobilize Muslim women for their efforts.

During the past few years right-wingers, from the President’s son to the Anti-Defamation League and troll armies, have targeted the Women’s March, Inc. For so long, I’ve admired their resilience in speaking truth to power, in working together, and in never cowering. Over and over again, the co-founders of Women’s March, Inc. put their lives on the line, winning power for all women in all of our diversity. The Women’s March, Inc. that voted me off its board tonight is one that no longer demonstrates the strength that inspired millions of women across the country.

To see and experience its new leaders caving to right-wing pressure, and casting aside a woman of color, a Muslim woman, a long-time advocate within the organization, without the willingness to make any efforts to learn and grow, breaks my heart. This isn’t about a lost seat, there will be many seats. The Women’s March, Inc. has drawn a line in the sand, one that will exclude many with my lived experiences and critiques. It has effectively said, we will work on some women’s rights at the expense of others.

To be clear, anti-semitism is indeed a growing and dangerous problem in our country, as is anti-Blackness, anti-immigrant sentiment, Islamophobia, ableism, sexism, and so much more. I condemn any form of bigotry unequivocally, but I also refuse to be silent as allegations of bigotry are weaponized against the most marginalized people, those who find sanctuary and hope in the articulation of truth.

In looking at the tweets in question, I acknowledge that I wrote passionately. While I may have phrased some of my content differently today, I stand by my words. I told the truth as my community and I have lived it, through the FBI’s targeting of my community, as I supported families who have lost loved ones because of US military actions, and as I learned from the horrific experiences of Palestinian life.

In attempting to heal and build in an expedited manner within Women’s March, Inc., I offered to meet with stakeholders to address their concerns and to work with my sisters on the new board to learn, heal, and build together. These efforts were rejected. And in rejecting these efforts, the new Women’s March, Inc. demonstrated that they lack the courage to exhibit allyship in the face of fire.

I came to Women’s March, Inc. to work. My body of work has included leading a chapter of the nation’s largest Muslim civil rights organization for over a decade, growing it now more than six-fold. In my tenure, I have led the team that forced Abercrombie to change its discriminatory employment policies, have been arrested advocating for DACA, partnered with Jewish organizations including Bend the Arc and Jewish Voice for Peace to fight to protect our communities, and was one of the first lawyers to sue the President.

It is not my first time being the target of a smear campaign. The Women’s March, Inc., more than any place, is where I would have expected us to be able to have courageous conversations and dive deep into relationship-building work.

I am happy to have as many conversations as it takes to listen and learn and heal, but I will no longer be able to do that through Women’s March, Inc. This action today demonstrates that this organization’s new leadership is unable to be an ally during challenging times.

My beliefs drive my work, and I am not seeking accolades or positions of power. These past few days have been the greatest test of that. My integrity, my truth, and my strength comes from God and a place of deep conviction. I will continue my work as a civil rights lawyer and a faith-based activist, speaking out against the occupation of Palestine and settler-colonialism everywhere, challenging Islamophobia and all forms of racism and bigotry in the United States, and building with my community and our allies in our quest to be our most authentic and liberated selves.

Zahra Billoo is a civil rights attorney and the executive director of the San Francisco Bay Area chapter of the Council on American Islamic Relations (CAIR). In this capacity, she leads the oldest CAIR chapter in the country, serving the Bay Area’s 250,000 Muslims. Zahra is frequently seen at mosques and universities facilitating trainings and workshops as a part of CAIR’s grassroots efforts to empower the American Muslim community and build bridges with allies on civil rights issues. Zahra also provides direct legal services for victims of law enforcement targeting and Islamophobia. Her work has been highlighted in local and national media outlets including the Christian Science Monitor, KTVU, MSNBC, NPR, and the San Jose Mercury News. Zahra is a 2014 recipient of the National Lawyers Guild San Francisco Bay Area Chapter’s Unsung Hero Award and a 2013 recipient of the South Asian Bar Association of Northern California’s Trailblazer Award.