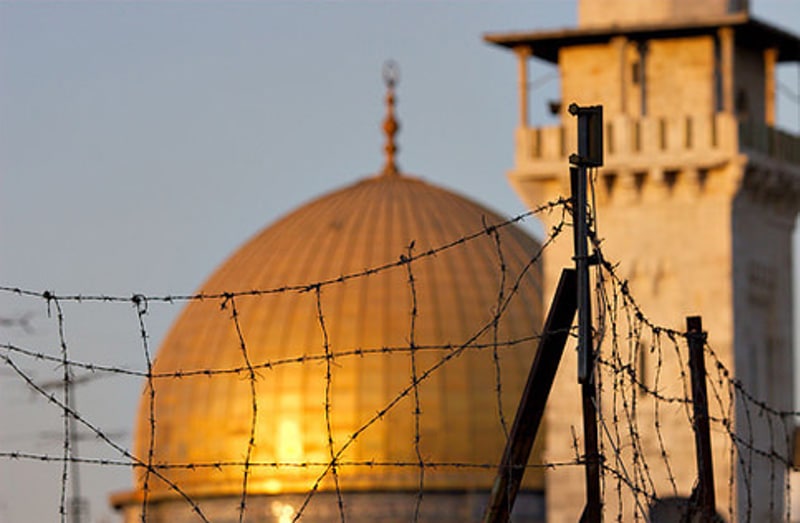 “Glory be to the One Who took His servant Muhammad by night from the Sacred Mosque to the Farthest Mosque whose surroundings We have blessed, so that We may show him some of Our signs. Indeed, He alone is the All-Hearing, All-Seeing.” (The Qur’an, 17:1)

In the month of Rajab, years before the Hijra, the Prophet Muhammad ﷺ traveled from Mecca to Jerusalem and from Jerusalem to the heavens during the “night journey”, or al-Isra wal Mi’raj. We commemorate this miracle every year during the blessed month of Rajab. Allah in describing His miracle of al-Isra wal Mi’raj bestowed glory to Jerusalem, and Palestine more broadly. We can use its anniversary to renew our commitment to the land of Palestine and its freedom from oppression. To nurture love for His holy land, for our brothers and sisters grounded in our Holy land, let us explore how Allah has emphasized His love for Palestine, its people, and its liberation.

Palestine is a Holy land in Islam

Islam is a faith and a way of life that has been shared and practiced worldwide. Some parts of the Earth carry a deep and memorable legacy of Islam, and Palestine is revered as an important land since the beginning of time. Palestine is a land of blessings, prophethood, and the home of the “second mosque.” Muslims faced Jerusalem when offering their prayers for years during the life of the Prophet Muhammad ﷺ until they were instructed to face Makkah after the hijrah.

The companions of the Prophet ﷺ exemplified their dedication to Palestine when they fought to defend it during the reign of Omar. Many companions, namely Ubadah bin As-Samit and Shadaad bin Aus, were even buried there. Political leaders after the period of al-Khulufa’ al-Rashidun and throughout Islamic history organized and fought to keep oppressors and invaders out of the holy land. The ethnically Kurdish, Muslim sultan Salahudeen al-Ayyubi led the heroic struggle against the crusades and Baybars historic battle against the Mongols at Ain Jalut. 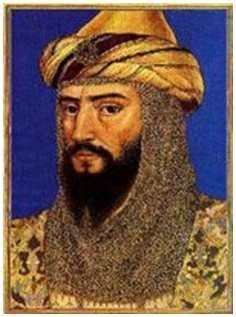 A portrait of Salahuddin Ayyubi.

Israel is the newest form and modern foreign attempt to conquer Palestine. After the collapse of the Ottoman Empire in 1924, David Ben Gurion, the primary national founder of the State of Israel and its first Prime Minister, coordinated military and colonial support with the British imperial state to begin the expulsion, occupation, and ethnic cleansing of Palestine and its people. The official creation of Israel in 1948 was marked by the Nakba, or mass exodus of more than 700,000 Palestinian Arabs from their homes during this time.

The mass exile of Palestinians is an attempt to empty the homes and land of Palestine to make space for European Jewish people who migrated en masse from around the world, nearly half from Europe, to colonize those stolen homes and occupied lands. In addition to the physical exile of as many indigenous people to uproot, fracture, and destroy their communities, settler-colonial projects target indigenous culture and religion to erase the oral, behavioral, spiritual, and immaterial aspects of their lifestyle. Israel has, since its inception, attempted to break the spirit of Islam in Palestine and Judaize the land – establishing Judaism as the primary and superior religious and cultural tradition even among a multiethnic, interfaith population.

Bans against the Islamic call to prayer, desecration of historical Muslim cemeteries, restrictions through age limits on who can pray in Al-Aqsa in fear of youth gatherings and uprisings, the targeting of mosques in Gaza during bombing campaigns, attempts to take control of Masjid Al-Aqsa, to name a few examples, are the ways by which Israel tries to subjugate Islam and Muslims in the holy land.

On February 25, 1994, Baruch Goldstein, an American Zionist from Brooklyn, massacred 29 people and injured over 100 in Masjid Al-Ibrahimi in al-Khalil, or Hebron, during the Fajr prayer in the month of Ramadan. This attack was further weaponized by Israel as a pretext to segregate the mosque and take the holy site from Palestinian control. Palestinians react and have always reacted strongly to Zionist attacks on Islamic heritage. The second intifada, or uprising, sparked after Ariel Sharon, the 11th Prime Minister of Israel, had entered the holy mosque and stated, “The Temple Mount is in our hands.”

These acts of violence alone, with a separate tier reserved for the slaughter of Palestinian men, women, and children in Gaza, as well as the indefinite siege that starves, cages, and kills Gazans to this day, are enough to shake the heart of every Muslim from any background and reveal the warfare against the political and religious identity of Palestinians.

How do we practice Brotherhood for our Ummah in Palestine?

Brotherhood is a core principle of Islam. Muslims worldwide have rights over one another simply by the nature of our shared belief system and relationship as brothers and sisters in Islam. We must treat one another well, support one another towards the truth, guide one other against wrongdoing, and more. The Quran discusses brotherhood in Islam as a blessing and unity as an obligation, and it was exemplified in the way the companions of the Prophet Muhammad treated each other.

“The believing men and believing women are allies of one another. They enjoin what is right and forbid what is wrong and establish prayer and give charity and obey Allah and His Messenger. Allah will have mercy upon them, for Allah is Almighty and Wise.” (The Qur’an, 9:71).

“The parable of the believers in their affection, mercy, and compassion for each other is that of a body. When any limb aches, the whole body reacts with sleeplessness and fever.” (Sahih al-Bukhari 5665).

The Islamic tradition echoes the notion that injustice anywhere is a threat to justice everywhere. Muslims have collectively always understood their obligation to support their brothers. In another hadith, the Prophet Muhammad ﷺ said,

Solidarity, as we understand it today, is an essential component of advocacy. We have seen significant strides in achieving justice for others through solidarity campaigns. Apartheid South Africa is a prime example of what happens when we stand for oppressed people around the world. In 1959, the Anti-Apartheid Movement launched to put an end to the system of institutionalized racial segregation, and within years tangible actions were being taken against the apartheid state.

There is no one singular way to stand in support of others. As Muslims in the United States, we need to be creative and original in developing solutions to the problems our ummah faces. We must recognize our obligation to support our brothers around the world through every means possible, as people positioned in a privileged position in the West. There are a lot of initiatives for just about any and every cause – the organization Justice For All advocates and educates on different plights of minority Muslim populations in India, Burma, and East Turkestan. Stand With Kashmir is a global citizen action group committed to ending the military occupation in Kashmir. American Muslims for Palestine is a leading education and advocacy organization that has worked for over a decade to shift the tide on Palestine; to continue to increase American public support for Palestinian rights and opposition to unconditional U.S. support for Israel. To get involved in the work, you can follow these organizations and support volunteer and advocacy calls.


Islam inclines us toward justice

Islam is a faith of activism. Justice is a fundamental principle in Islam and is rooted in spirituality and God-consciousness. The Holy Quran commands us to be “upholders of justice and witnesses before God” and states that, “God commands justice and fair dealing” (The Qur’an 16:90). We must be just with ourselves and those around us. We must stand against evil and oppression.

This hadith tells us that a person cannot just stand back and watch as acts of injustice take place. An example of holistic justice is the importance Islam gives to taking care of those who are helpless, both physically and financially.

It is with the understanding of these three concepts, the importance of Palestine in Islam, brotherhood, and justice, we are propelled to support and stand by our Palestinian brothers and sisters. And as people who live in the United States, our responsibility is even greater. The United States is the largest supporter of Israel which means that we have a huge potential for creating effective change. One means by which we can act on such change is by supporting the boycott, divestment and sanctions campaign. Such a campaign calls upon consumers, community organizations, and governments to withdraw their support for companies complicit in Israel’s various human rights violations. Such a campaign has been supported by prominent intellectuals, politicians, and human rights groups throughout the world. It is critical that Muslims be involved in this important pursuit for justice.

God relays in the Quran, “And remind, for indeed, the reminder benefits the believers.” (The Qur’an 51:55).

In this month as we remember al-Isra wal Mi’raaj, the Night journey of our prophet, we must recommit ourselves to fighting for justice in this land. To inspire yourself and others by further exploring this issue, be sure to be a part of Aqsa Week held during the last week of Rajab, between March 6-12. Officials related to al-Aqsa mosque in Jerusalem have praised this initiative organized by American Muslims for Palestine and Friends of al-Aqsa, which will consist of a variety of virtual activities and educational sessions to foster the love of al-Aqsa in the hearts of Muslims worldwide.

Mark your calendars and follow American Muslims for Palestine on Twitter and Facebook to be notified of the upcoming virtual events to attend for Aqsa week.

Mohamad Habehh is the National Development Coordinator with American Muslims for Palestine. He is a graduate of Rutgers University with a degree in social work & political science. He has experience working with a variety of marginalized communities, including incarcerated persons. Mohamad currently works to establish & coordinate Palestine grassroots advocacy efforts nationwide - holding workshops and Friday sermons. He has been featured on global platforms like TRT World for his expertise.