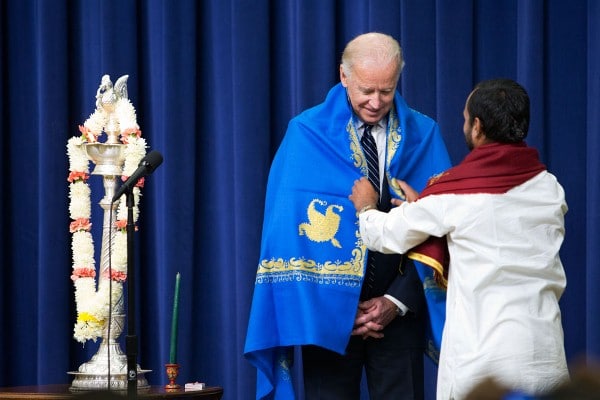 Once widely regarded as the frontrunner for the Democratic presidential nomination, Joe Biden now finds himself in a struggling campaign. Nevertheless, despite poor performances in early states, many see Saturday’s South Carolina primary as his chance to bounce back. To a large part of the Democratic establishment, Biden is still the man who can replace Donald Trump, a widely unpopular president who has been a part of a wave of far-right Islamophobic heads of state around the world, from Israel’s Benjamin Netanyahu, to China’s Xi Jinping, to India’s Narendra Modi.

Despite presenting himself as a liberal counterweight to this virulent wave of Islamophobia, Joe Biden has hired as his Muslim outreach coordinator, Amit Jani, an avid supporter of Narendra Modi and his Hindu nationalist agenda. 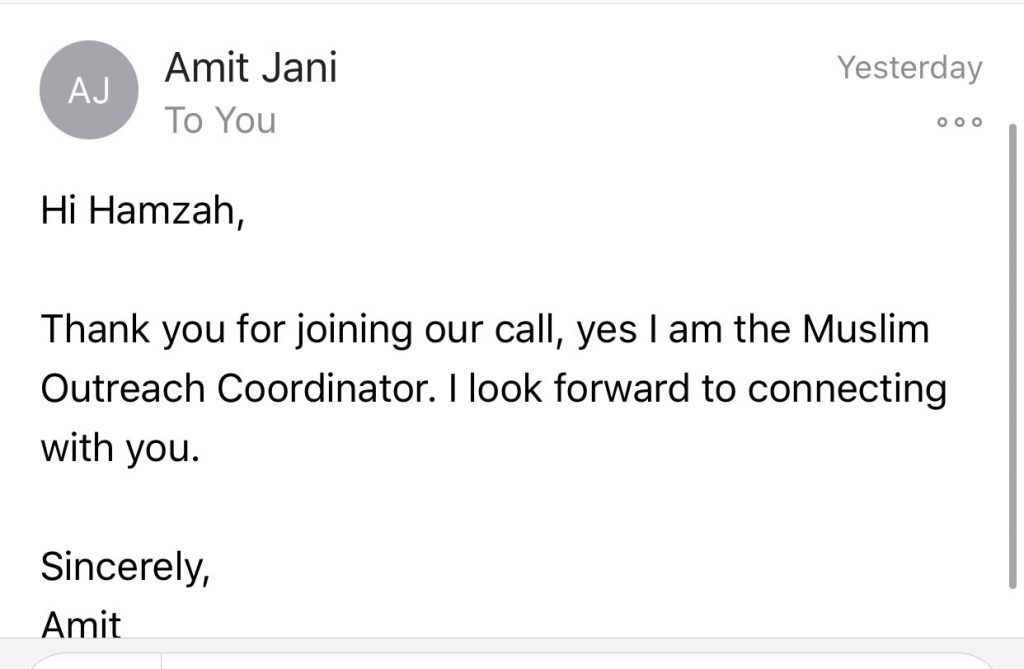 In 2002, Modi, as Chief Minister of Gujarat, presided over a massacre of Muslims in the province, by inciting religious violence, which resulted in the death of nearly 2000 civilians, according to a report from Human Rights Watch. This was some of the most gruesome religious violence ever seen in an independent India.

When asked if he regretted the violence, Modi compared it to feeling bad over accidentally running over a puppy. In 2005, Modi was subsequently banned from the United States based on his role in the Gujarat massacre, a ban that would persist for nearly a decade. It was only lifted in 2014 after Modi was elected Prime Minister of India.

As Prime Minister, Narendra Modi and his political party, the Bharatiya Janata Party(BJP) have continued these attacks on Muslims. On midnight of August 4th, 2019, Modi’s BJP-led government revoked Article 370 of the Indian constitution, which granted Indian-occupied Kashmir, a disputed territory that is majority-Muslim, special status and internal autonomy. By stripping Kashmir of such status, Modi has opened the door to a brutal military occupation of the Kashmiri people. This occupation has stripped Kashmir of its internet, landline, and cell phone access, implementing a blackout that has deprived Kashmir of communicating with the outside world. This has particularly distressed Kashmiris living abroad by preventing them from communicating with their families living inside the region. Many abroad are unsure of the safety of their family members living in Kashmir, given Modi’s government’s escalated militarization of the region.

Modi has also passed a Citizenship Amendment Act seeking to fast track Indian citizenship for religious minorities from neighboring Muslim-majority countries, while setting forth a plan requiring India’s 200 million Muslim citizens to undergo a citizenship registry, mirroring not only Trump’s call for a Muslim registry but also Hitler’s Nuremberg Laws, which targeted German Jews in what would lead up to the Holocaust. In the state of Assam, which has a large Muslim population, this registry has already been implemented. Residents must either prove or lose their citizenship. Those who have been unable to prove their citizenship are already being sent to detention camps.

For the past four days, the Indian capital of Delhi has been burning, masajid, markets cemeteries destroyed.  A preplanned state-sanctioned attack on peaceful protesters has resulted in a death toll of 35 and rising.

In the midst of Modi’s decades of Islamophobia, Biden’s Muslim outreach director, Amit Jani, has heaped praise on him. On the night of Modi’s election, Jani was in India, and posted a photo of himself wearing a BJP shirt on Facebook with the caption: “Loved the energy and jubilation throughout the state on Prime Minister Narendra Modi’s victory in the Indian national elections! Proud of Deepti Jani[Amit Jani’s mother] for all the work you did during the campaign.” 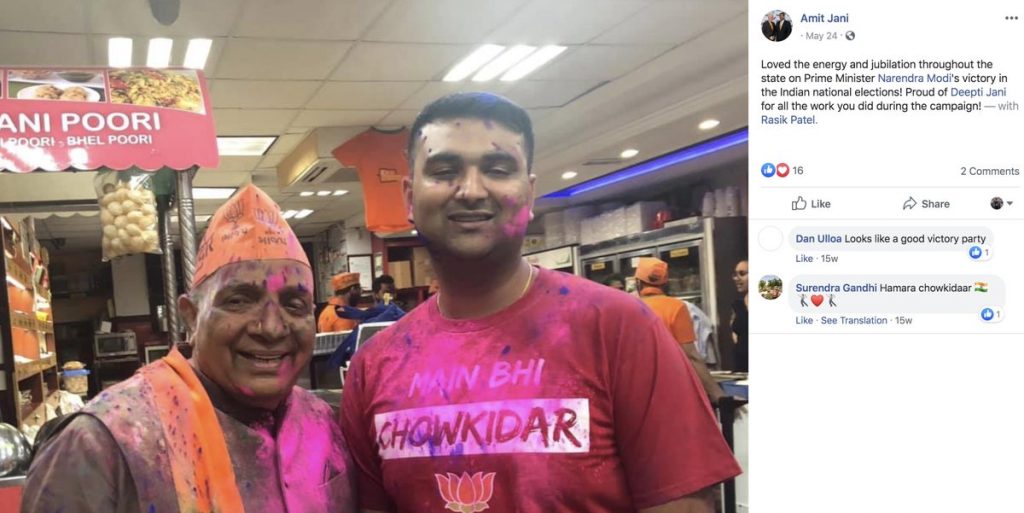 Amit Jani’s name appeared on the flyer for an August 21st event celebrating the removal of Article 370, opening the door to Modi’s annexation and communications blackout of Kashmir. Jani was listed on the organizing committee for the event. The keynote speaker at this celebration was Kailash Vijayvargiya, the National Secretary-General of the BJP, Narendra Modi’s political party. Vijayvargiya once claimed that Shah Rukh Khan, a famous Indian Muslim Bollywood actor is an “anti-nationalist” who “lives in India, but his heart is in Pakistan,” after Khan remarked that India is going through a period of extreme intolerance for religious minorities. 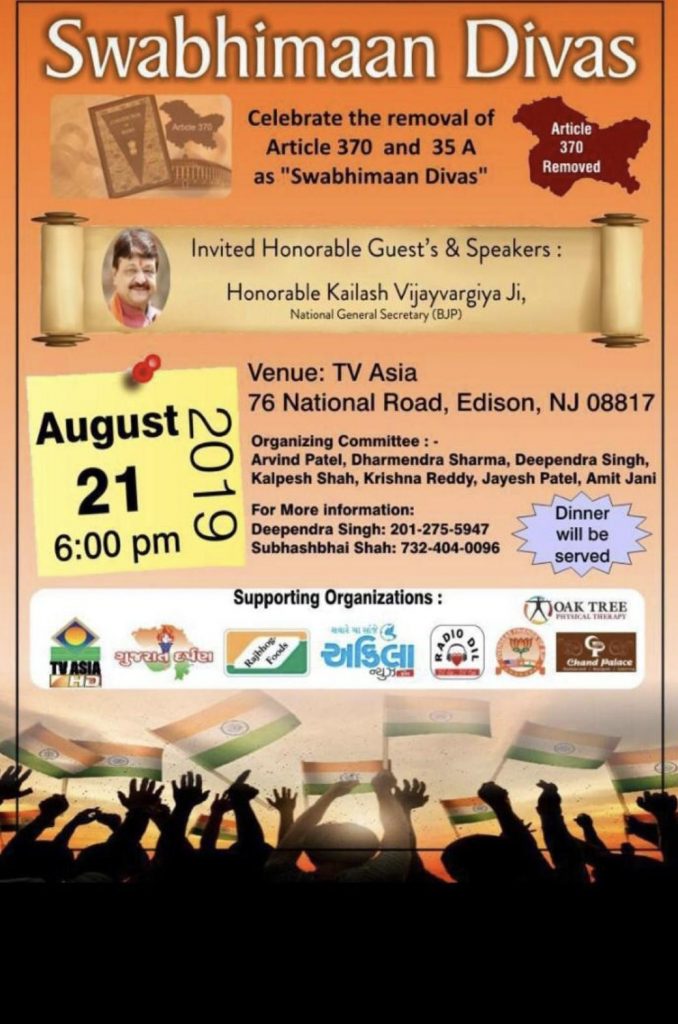 On June 25th, 2017, Amit Jani also took a picture with Narendra Modi at a “community reception” in McLean, Virginia, the day before Trump’s “Howdy Modi” rally in Houston, which featured Donald Trump and Narendra Modi, before a crowd of 50,000 supporters. His mother, Deepti Jani, posted the photo of Jani and Modi with the caption: “Amit Jani with Respected Prime Minister Narendra Modi.” These are alongside other pictures on Amit Jani’s Facebook page heaping praise upon this Islamophobic leader.

In a Huffington Post article he wrote in 2014, Amit Jani spoke about the impact that Narendra Modi had on his family after he stayed at their Jersey City home when visiting the United States in 1993. He compared Modi to Barack Obama lamenting that “Modi and Obama have brought fresh voices and creative ideas to their governments, after many years of having increasingly unpopular and disconnected leaders in office.” One is led to question if Jani includes inciting hatred against religious minorities as part of these “fresh and creative ideas” of Modi.

The late Suresh Jani first met Narendra Modi at a gathering of the Rashtriya Swayamsevak Sangh, or RSS, an all-male, far-right paramilitary Hindu nationalist organization founded in 1925. Modi joined the organization when he was just 8 years old. It was banned in the first year of Indian Independence after an RSS member murdered Mahatma Gandhi because he believed that Gandhi was too favorable to India’s Muslims.

The organization would be subsequently banned two times after that, from 1975 to 1977, and in the year 1992. The second leader of the RSS, M.S. Golwalkar was deeply inspired by Nazi Germany, which he said displayed “race pride at its highest” and was “a good lesson for use” in India. He even compared India’s Muslims to the Jews of pre-Nazi Germany. Golwalkar coined the term Hindutva and stated that India needed to become a Hindu Nationalist state. He said that India faced three “internal enemies” in reaching this goal: Muslims, Christians, and Communists. As Chief Minister of Gujarat, Modi also oversaw the distribution of textbooks that praised Hitler, describing him as a leader “who lent dignity and prestige to the German government.”

Islamophobia has threatened the well-being and fundamental human rights of hundreds of millions of Muslims on a global scale. This can be seen through Trump’s Muslim ban, the brutal military occupations of Kashmir and Palestine, China’s rounding up of Ughyur Muslims into concentration camps, and the Modi’s government stripping Indian Muslims of their citizenship. For Biden to confront this global tide of Islamophobia is not just important for the safeguarding of the rights of Muslims, but also important for safeguarding the rights of so many marginalized minority groups that are threatened by this rise of fascism and illiberal democracy.

For Amit Jani to be Muslim outreach coordinator for the Biden campaign is beyond insulting to America’s millions of Muslim Americans. At a minimum, the coordinator of Biden’s Muslim outreach should not be a man who praises one of the world’s leading Islamophobes. Modi presided over a massacre of Muslims, and since becoming head of state, has attempted to strip 200 million Muslims–in a country with the second-largest number of Muslims in the world–of their citizenship.

The Biden campaign’s hiring of Amit Jani as Muslim outreach coordinator would be analogous to a friend and supporter of the Grand Wizard of the Ku Klux Klan doing Black outreach.

WATCH: Bloomberg Claims Mass Surveillance Of American Muslims Was “The Right Thing To Do”