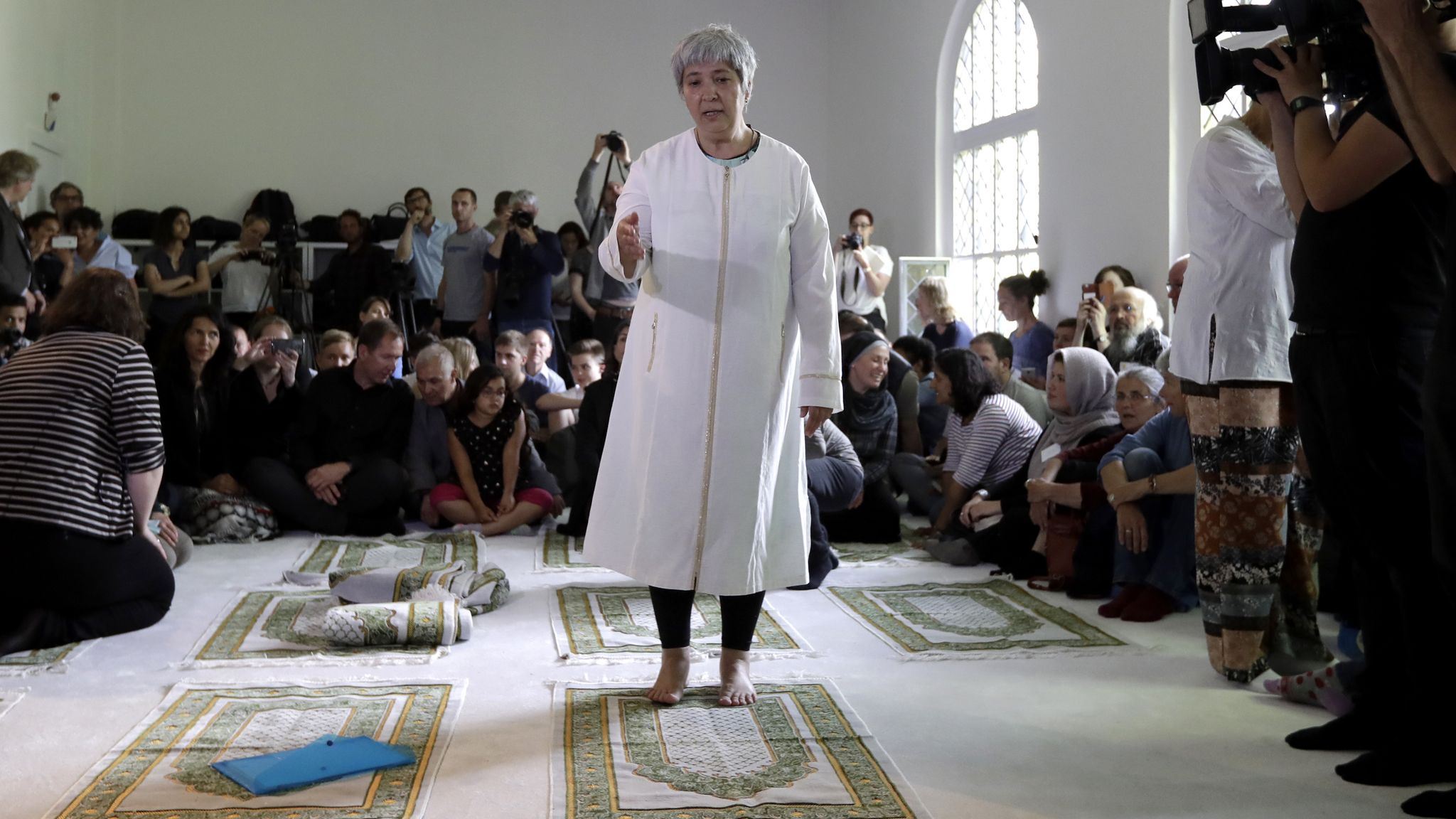 In their orientalist enthusiasm to reform Islam, in the sense of reconciling Islam with the always changing ideas and goals of liberal values, Western European liberals and neo-atheists are searching high and low for persons who may serve as Muslim alibies for their project. For many years Ayaan Hirsi Ali was given this role but now the relay baton has been handed over to the German-Turkish activist Seyran Ates.

Does not believe in religion

Ates is of current interest in Norway because her book by the Norwegian title Islam trenger en seksuell revolusjon (Islam needs a sexual revolution, originally published in German in 2011)* was just released in Norwegian translation. Ates is well-known primarily because Western media have hailed her as a freedom fighter among Muslims since she opened a so-called liberal mosque in Berlin in 2017 and titled herself a female imam.

Obviously, Ates is part and parcel of an essential debate about the future of Muslims in Europe as it is a fact that a lot of traditional mosques in Western Europe have a big job to do in order to become more relevant to young Muslims, that is, more inclusive and adapted to a European context. Not least the issue of women’s rights is rightfully important to many people in the Muslim world, whether they are liberals or conservatives. In the midst of all the praise, Ates receives in Western media one essential question is however forgotten: What Islamic credibility does Ates have? In line with postmodern nihilism where concepts, ideas, and identities are emptied of meaning and content, the fact is ignored that Ates in her book points out that she believes in God but not in religions. She has no Islamic theological education and explains that she has recently started taking courses in Islamic studies and Arabic in order to be more credible among Muslims.

This is not only the case with Ates. It is a general weakness of so-called progressive and liberal Islam (reformers) that the movement lacks a foundation of religious and theological structure; it is rather founded on personalities with a political mission.

In her book about Islam needing a sexual revolution, Ates applauds European Christians’ dissociation from the church after 1968. Paradoxically, she later opened a mosque for Muslims. Further, she praises secularly thinking individuals as the most honourable people.

This is why the question should be raised whether the mosque, the imam title, and other religious references are just an Islamic camouflage for what can be understood as a political secularisation, assimilation and liberalisation project by Ates and her supporters. Due to the missing religious credibility and seriousness of this commitment, it should come as no surprise that it has little appeal to European and German Muslims.

When the New York Times visited the mosque, its journalists reported that there were more journalists than worshippers present. She has, on the other hand, a strong appeal among extreme right-wing anti-Muslim thinkers and movements in Europe. It is noteworthy that Ates received a solidarity claim from the extreme anti-Islam German AfD party, and has been praised by the infamous anti-Muslim blog of “Human Rights Service” in Norway.

The positive development aspect is missing

Why should German and European Muslims listen to an activist who attacks the fundamental principles of Islam and in her book paints a stereotypical image of the world’s Muslims?

There is no denying that Ates addresses a number of important challenges for Muslim women. Still, her arguments become oversimplified when she confuses female-hostile habits in the East with Islam and completely forgets the positive development today’s Muslim women in Europe experience where they, as opposed to their mothers’ generation, receive a university education, have a career, and choose whom they want to marry.

Seyran Ates’ project is not about a necessary contextualisation of Islam’s holy texts in a European reality, maintaining the characterisations of the region. The project is rather about a total change of Islam. In her book, Ates justifies such a change by creating strawmen with sweeping generalisations about Muslims. She, for instance, writes that ‘it is a fact that Muslim men have a considerable problem with our free world’, and that ‘Islamic politicians do not distinguish between religion and politics’ – without mentioning the widespread authoritarian secular tradition in Muslim countries in modern times such as in Turkey and Baathism in Syria and Iraq.

Ates’ main argument in Islam needs a sexual revolution is that Muslim men and women are sexually oppressed because sexuality is defined as a blessing and source of love only within – and not outside of – the frames of marriage. The rule of intimate relationships being reserved for marriage meets with unison agreement from Muslims from different schools of thought; Ates, however, absurdly calls it an expression of “fundamentalist” Islam. In this view, Seyran Ates disagrees with the well-known American feminist Naomi Wolf who, after having travelled in Muslim countries, believes that this marital channelling of intimacy, in fact, strengthens sexuality and family ties at the same time.

The German-Turkish author wants less sexual restraint, more promiscuity and a liberal attitude to nakedness, in line with the ideals of the sixty-eighters. Seyran Ates praises the sixty-eighters’ revolution as an ideal for Muslims. Although the #metoo campaign, which can be said to have brought to light the negative consequences of the sexual revolution, was released after Ates’ book was published, it makes her attitudes to this revolution seem somewhat doubtful. The heritage of the sixty-eighters is not only freedom and equality but also the breaking up of the family as well as selfishness and decadence. It is also ironical that someone like Ates, who claims religious credibility, calls attention to Alfred Kinsey, the atheist sexologist who believed in open relationships, as a model for Muslims.

Ates’ book is mainly about freedom, a personal freedom in the name of value liberalism and sixtyeighters. A well-known American intellectual, Patrick Deenen from the University of Notre Dame, however, criticises such a perception of the concept of freedom believing we should ask ourselves if freedom can really be defined as human beings pursuing their instincts more or less uncritically. Deenen maintains that human beings are then in effect unfree and slaves of their instincts, while real freedom is achieved if we manage to free ourselves from being governed by human appetites.

Seyran Ates and her non-Muslim supporters seem to have no understanding at all of such a definition of the concept of freedom. Even more problematic is that they want to make their sixty-eighters’ liberal values absolute, believing Muslims must adhere to them if they wish to belong to modern society. Harvard professor Adrian Vermeule calls this form of liberalism aggressive because it only tolerates itself and no differences of opinion. It maintains its rituals in the form of checkpoints of ‘correct’ opinions in particular about sexuality, gender, and identity. Disagreeing with this can result in reprisals in the form of public pillory or even legal steps.

Obsessed with removing the hijab

When Muslims are met with such absolute-making of liberal values it is like an extension of colonial cultural imperialism when French and British colonial masters wanted to westernise Muslim populations, believing it was the only way of making them civilised. Some of them were obsessed with removing Muslim women’s hijabs, just as Seyran Ates is. The British consul general in Egypt, Lord Cromer, was a representative of this view. He wanted to free Muslim women from the hijab while at home in the UK he was ardently against feminism and women’s suffrage (source: Ahmed, Leila (1992). Women and Gender in Islam. New Haven: Yale University Press).

Worth noting is also that extensive surveys by Gallup Coexist Index among West-European Muslims show that they are far more religious than the majority population. Similar findings in relation to Norwegian Muslims were made by Bushra Ishaq in her book Hvem snakker for oss? (Who speaks for us?) from 2017. Considering these figures, it would be utopian as well as illiberal to expect Muslims to opt for a liberal values morality. On the contrary, it should be expected that religious European Muslims understand their religious practice as belonging to a Western context, that they value equality and that they support the liberal state governed by rule of law that actually allows people to live according to liberal as well as conservative norms of value.

Ya Qawmi: Strengthen Civic Roots In Society To Be A Force For Good