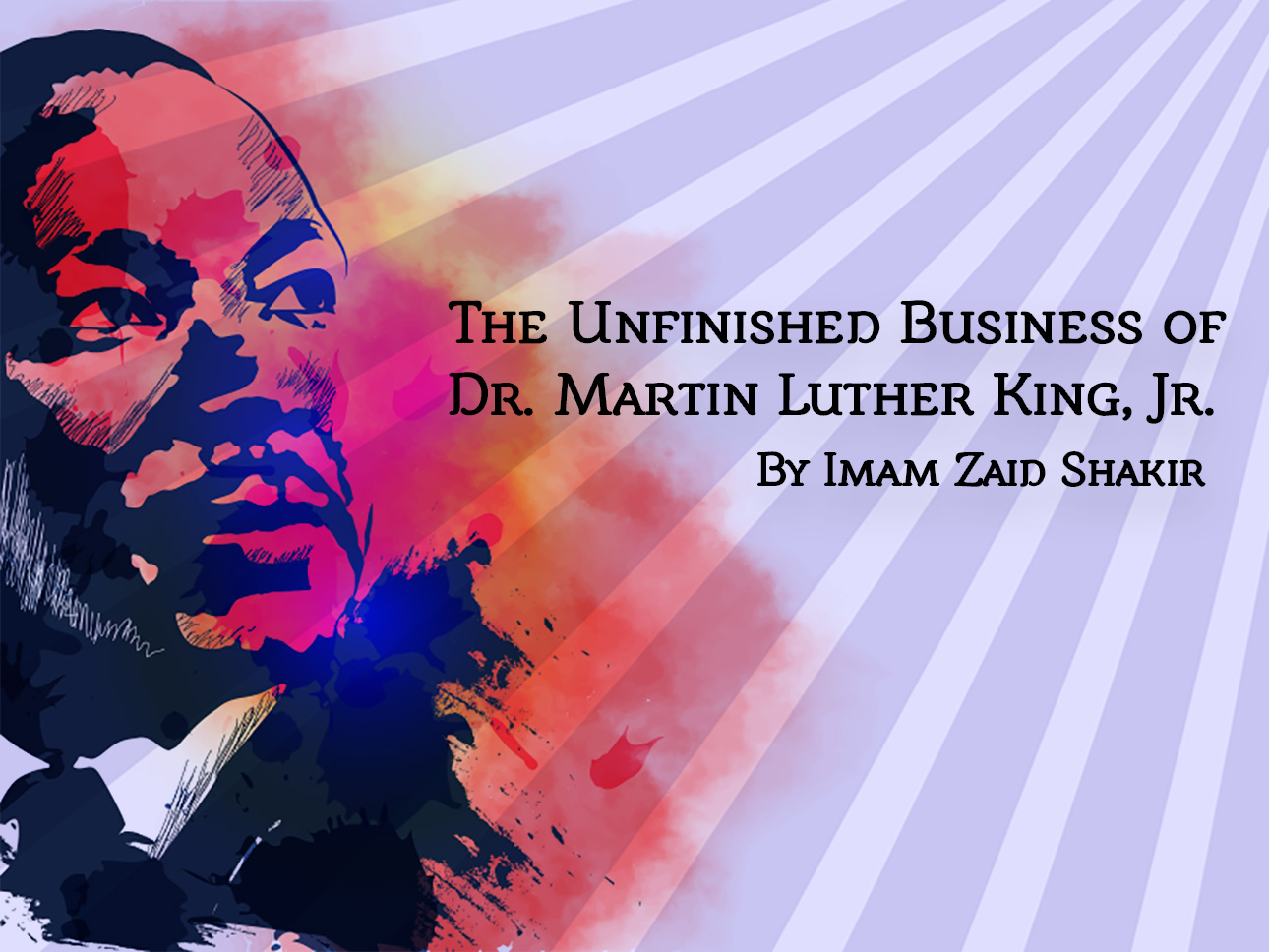 During these days many in this country are commemorating the life and work of Dr. Martin Luther King, Jr., born January 15, 1929. While most remember Dr. King for his soaring oration, symbolized by his famous “I Have a Dream” speech, delivered before a sweltering throng at the Lincoln Memorial, August 28, 1963, Dr. King was far more than a moving orator. He was a formidable intellectual, an effective organizer and a passionate advocate for the freedom of his people. These qualities combined with Dr. King’s oratorical abilities to make him an individual oppressive political powers came to both despise and fear.

For all that he was able to accomplish in the context of the Civil Rights struggle and in advancing the rights and dignity of African Americans, Dr. King realized that his work was not complete; neither in the South nor in the North, as his painful experience in Chicago underscored. To a certain extent, his unfinished work is larger than the Civil Rights struggle. That larger work revolves around what he identified as the evil triplets of racism, materialism, and militarism. Decisively combating these evils is a daunting challenge, some might even describe it as nearly impossible. Dr. King realized, however, that with the help of God all things are possible and he thus never lost hope that we could overcome these forces. As people of faith, this should be our firm belief.

Our Muslim community is one whose existence, contrary to popular misconception, is predicated on the establishment of peace. It is a community that came into existence as a multiracial force and lists anti-materialism as one of its foundational principles (renounce the world and Allah

will love you). I believe that we have been divinely prepared to take up the torch held aloft so courageously by Dr. King and dedicate ourselves to the completion of his work. This is absolutely critical for the wellbeing of our nation and the world for as long as those evils rip through the waters of our collective humanity, the dehumanizing violence they give birth to will follow in their wake.

In his powerful but oftentimes overlooked speech, “Why I Oppose the War in Vietnam,” delivered at the Riverside Church in Manhattan on April 4, 1967, Dr. King showed how these three evils are connected and how they combine to make the United States, in his words, “…the greatest purveyor of violence in the world today.” The fact that such violence continues, unabated, should cause all of us to reflect deeply on why we as a society have not done more to address it. The gut-wrenching violence we visited upon Vietnam has directly afflicted Afghanistan and Iraq and indirectly defines the fate of nations like Yemen, Somalia, Syria, and Palestine.

I believe one of the reasons we have done so little to arrest that violence is because we as a nation are so effective in denying its existence. In the words of a popular song, “Memories may be beautiful and yet what’s too painful to remember we simply choose to forget…” As a society, we find it far too easy and convenient to simply forget the painful horrors of native genocide, chattel slavery, Jim Crow and its accompanying brutalities, Hiroshima, Nagasaki, Vietnam, Iraq, Afghanistan or the next place whose name might be added to this list. Dr. King forces us to remember these horrors and the violence they birthed –through the brilliance of his oration, the seriousness of his struggle and the testimony of his death.

The following quote from Francis Fitzgerald’s vivid chronicling of the Vietnam War, “Fire in the Lake,” serves to both awaken us to the magnitude of American violence and also the tragedy of how easy it would be to replace Vietnam with Iraq, Afghanistan, Somalia, Syria or Yemen and find that it would be an apt description of any of those places. She writes:

In the refugee camps and isolated villages people die of malnutrition and the children are deformed. In the cities, where there is no sanitation and rarely any running water, the adults die of cholera, typhoid, smallpox, leprosy, bubonic plague, and their children die of the common diseases of dirt, such as scabies and sores. South Vietnam knows nothing like the suffering of India or Bangladesh. Comparatively speaking it has always been a rich country and the American aid has provided many people with the means for survival. But its one source of wealth is agriculture and the American war has wreaked havoc on its forests and paddy lands. It has given great fortune to the few while endangering the country’s future and forcing the many to live in the kind of “poverty, ignorance and disease” that South Vietnam never knew before.

Still, the physical destruction, perhaps, is not the worst of it. The destruction of an entire society –“That is, above all, what the Vietnamese blame the Americans for,” said one Vietnamese scholar. “Willingfully or not, they have tended to destroy what is most precious to us: family, friendship, our manner of expressing ourselves.” … “Physical death is everywhere but it is the social death caused by the destruction of the family that is of overriding importance.”

One could realistically ask why mention these things at this time when we should be celebrating Dr. King’s life and work? Why should we even care when we can do little or nothing to change such monstrous realities? I would respond that his nonviolent opposition to the stultifying violence of our country is the very essence of Dr. King’s life and work and collectively, with the help of Allah, we can begin to change the regime perpetuating that violence. I would respond to the above queries with a different set of questions. Namely, how many more innocent societies have to be destroyed before we as a people say enough is enough? What type of world do we wish to leave our children? Is it one where the situation described in “Fire in the Lake” becomes so common that it does not even prick their consciences. Have we become so blinded by the American dream that we can no longer see the accompanying global nightmare that helps to make it possible?

Some would say that the mere mention of such issues is overwhelming for the average person and hence could well lead to a type of socio-psychiatric paralysis. One the beautiful features of Islam is that it allows us to recognize our limitations while still maintaining a principled opposition to wrong. By so doing we are able to escape becoming socio-political zombies. Our Prophet (peace and blessings of Almighty God upon him) wisely stated,

Thus, if one finds himself or herself unable to do something lawful and practical like joining with the work of the Quakers or other institutions with a long history of nonviolent anti-war activism in this country, or founding a similarly-oriented Muslim group, let him or her speak out against it at every forum and via every medium available. If even that is not possible then let them hate it in their hearts. Doing so is the least we can do to honor the life, legacy, and sacrifice of Dr. King and hopefully, it will serve as a first step in our moving to finish the work he so valiantly started.