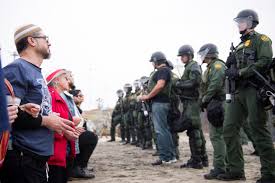 After 20 years as a civil rights activist, I was detained for the first time – on International Human Rights Day, Dec. 10 – along with 31 other faith leaders and human rights activists.

We were less than 30 yards away from the U.S.-Mexico border, where on the other side, as many as 6,000 asylum-seekers await the Trump administration to comply with federal and international law and process their claims. Instead, these asylum-seekers have been met with tear gas, pepper spray and dehumanizing rhetoric from the president.

The action at the border was led by the American Friends Service Committee (AFSC) as part of the Love Knows No Borders: A moral call for migrant justice week of action, to help raise awareness about this injustice, call on the U.S. to respect the human right to migrate, end the militarization of border communities and end the detention and deportation of immigrants.

Those basic rights are recognized in Articles 1, 5, 9, 13, 14, 15 and 30 of the Universal Declaration of Human Rights (UDHR), which lists a set of fundamental human rights to be universally protected.

CAIR partnered with AFSC in organizing a Muslim contingency for the action, consisting of several American Muslim leaders from across the nation, including Imam Omar Suleiman and CAIR staff. We joined nearly 400 faith leaders of different religions, denominations and beliefs in demonstrating at Border Field State Park in San Diego.

We marched to the beach where we saw the metal wall, wrapped in razor wire, delineating the border between the United States and Mexico. U.S. Customs and Border Protection (CBP) used more razor wire to create a law-enforcement zone about 30 yards away from the wall.

Our group was met by heavily-armed border patrol agents dressed in riot gear, who physically blocked our access to the border wall.

CBP agents shouted instructions through a megaphone: “Move back!”

Instead, we knelt in front of the agents. To the west were the waves of the Pacific Ocean. To the east were rows of coiled razor wire, rising 4-feet high. Behind us were hundreds of supporters, chanting, singing, praying and shouting encouragement.

It became obvious to the agents we were neither going to move out of the enforcement area nor disperse, so they began to arrest us. I was one of the first to have my hands put behind my back, zip-tied and led away to a detainee transportation vehicle, driven to a secluded area and kept in the vehicle for a short time, cited with federal trespassing (a misdemeanor) and released.

Someone asked me why I was willing to be arrested for people I don’t personally know and might never meet.

As a practicing Muslim, I am reminded of a hadith (saying) from the Prophet Muhammed, peace be upon him: “None of you is a true person of faith until you love for your brethren what you love for yourself.”

My faith in Allah is the most important part of my life. And it was my faith, love and passion for dignity, respect of human rights for all people, including our brothers and sisters from Central America seeking asylum and refuge, that led me to protest and get detained.

My story is much like those from Central America. Thirty years ago, I arrived in America as a teenage student to pursue a college education at the University of Texas at Austin, escaping civil war in my home country, Lebanon.

As someone whose relatives suffered under the tyranny of the Assad regime, I especially appreciated the U.S. Constitution and the justice and freedom it guarantees or, at least, promises to all. I quickly fell in love with the people, the country and decided to stay, to adopt America as my new home.

It hasn’t been perfect, but it seemed our society was making progress, challenging racist laws, practices and attitudes.

Two years ago, things started to deteriorate rapidly and drastically.

The soul of our country came under attack by an administration with a racist, inhumane, divisive and hateful agenda that includes:

We are being robbed of the soul of our country, piece by piece, right before our eyes.

This was neither the America, nor the promise of America, that I have come to love.

In his remarks at Border Field Park, Imam Suleiman said:

I’m proud to have been among 32 faith leaders and activists who were arrested for the sake of uplifting the voice of the voiceless.

We must protect the soul of America, the promise of the Constitution, the protections of the Universal Declaration of Human Rights, and the concept of liberty and justice for all.

That’s why I protested and was arrested. And I’d do it again.

Hussam Ayloush is the Executive Director of the Greater Los Angeles Area office of the Council on American-Islamic Relations (CAIR-LA). He has been a lifelong human rights and democracy activist for causes here and abroad. Mr. Ayloush holds a B.S. degree in Aerospace Engineering from the University of Texas, Austin and an M.B.A. degree from California State University, Fullerton. He is married and has 5 children. взять быстрый займ на карту без проверок

Journey to the Holy Land: Reflections on Palestine | Part 3 of 4