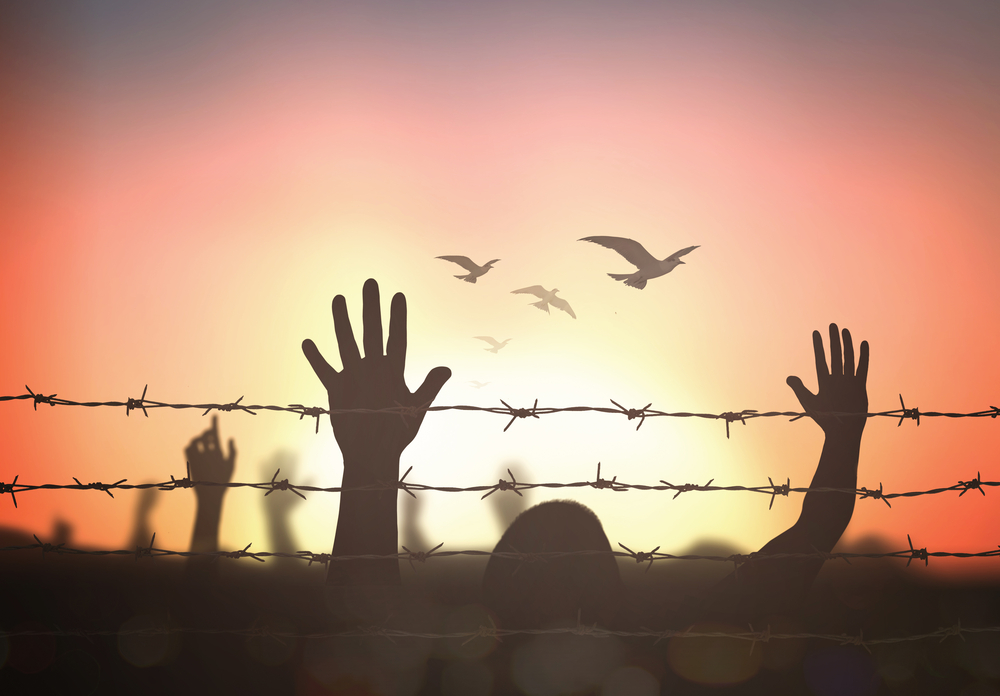 The UAE’s Forum for Promoting Peace in Muslim Societies released its most recent statement urging Muslim populations to refrain from any call for democracy if they want to live in peace. As many can see, the statement is disappointing as it essentially tells Muslims to accept the tyranny of their autocrats (unless they want to live in chaos and bloodshed). Problematically, it places the onus of preserving peace on populations rather than governments (whose main job is to preserve peace) and gives oppressive governments a pass on all of their egregious and horrific violations while asking populations to waive their rights. Even more disturbing is the fact that this argument was given an Islamic garb. The religious justification for the claim that “a call for democracy is a call for war” must be addressed as it is – with all due respect- flawed and ignores the clear Islamic tradition which encourages non-violent opposition to tyranny. Islam cannot be used as a tool by which to silence populations with legitimate grievances.

“In societies that are not ready, the call for democracy is essentially a call for war…Our Sharī‘ah goes to great lengths to avoid bloodshed and to maintain harmony and serenity, and our tradition teaches us that reform is preferable to revolution, as revolution brings destruction without offering solutions. History has taught us that damage to humans is very different from damage to structures. Reform is also more familiar to Arab and Islamic cultures.”[i]

Problematically, the statement equates the mere call for democracy with revolution and, consequently, suggests that it will inevitably cause bloodshed. One wonders: If a simple “call” for something is equal to revolution, then what does reform look like? Isn’t a “call” for change the practical definition of “reform” (which the Forum claims to prefer)? If a “call” for democracy is equal to revolution, thus removing that option off the table, what other options do Muslims have to exercise the power of “reform”? Nothing. The Forum has drawn a false image where there are only two options on the table, tyranny and bloodshed (with tyranny being the preferred choice).

With all due respect to the scholars that participated in the Forum and without questioning any intentions, the Forum’s statement does not seem consistent with the Islamic tradition which has clearly encouraged Muslims to hold their leaders accountable and demand change when it is needed. The Forum is correct in that the Sharia avoids bloodshed and that Muslims scholars, over the centuries, have shown an aversion to revolution due to the bloodshed and destruction it causes. However, those same scholars drew a clear distinction (which the Forum seems to ignore) between armed revolution and non-violent opposition to those in authority. A faithful reading of the Islamic tradition reveals not only that Muslims have the right to oppose those in power and hold them accountable, but that they have the duty to do so. Engaging in such action is not the same as engaging in armed rebellion.

Any Muslim with a rudimentary knowledge of his/her faith knows that every Muslim has a duty to perform ‘amr bil-maarouf (enjoining the good) and nahi ‘an al-munkar (forbidding the evil).[ii] A Muslim is commanded to change the munkar (evil) by either taking physical action, speaking up against it or, at least, rejecting it with one’s heart.[iii] It may occur to some that this duty only applies between individuals and that it doesn’t apply to the relationship between subjects and rulers, especially in light of the many hadiths that demand obedience to “those in authority”. However, the Prophet Muhammed

—the same man who commanded Muslims to pay heed to those in authority— praised the one who stands up to a tyrannical leader by commanding him (i.e the ruler) to do good and forbidding him from doing evil. According to the Prophet

, a person killed by a tyrant after commanding him to do good and forbidding him from doing evil is “the master of martyrs”, equating him with his martyred uncle (Hamza

The best Jihad is a word of justice in front of an oppressive ruler.[iv]

As a result, Muslim jurists have often drawn a distinction between ‘amr bil-maarouf wal nahi ‘an al-munkar and al-khurouj bil-sayf (rebelling with the sword).[v] The former is encouraged while the latter is, according to many (but not all) scholars, prohibited. Muslims are not only free to speak up against the tyranny of those in authority, but they are also permitted to refuse to carry out their unjust policies and to physically undo their actions, as these forms of conduct do not constitute rebellion.[vi]

This is evident in how Muslim scholars dealt with the tyrannical rulers of their time. Imam Abu Hanifah رحمة الله was called upon by the Ummayads to endorse a clamp-down on an uprising. Abu Hanifah defied the demands of the Ummayad governor and declared, “If he ordered me to count for him the doors of the mosque I wouldn’t comply. So how can I comply when he wants me to endorse his command to strike the throat of a Muslim?!”. Abu Hanifah was consequently detained and beaten for days.[vii]

The Imam remained equally true to his principles after the Abbassids overthrew the Ummayads. As part of his effort to secure his rule, Al-Mansur, the Abbasid Caliph, made the people of Mosul pledge allegiance to him and that their blood would be “lawful” if they break their pledge; essentially, they had to pledge their lives as collateral. When the people of Mosul broke their pledge, Al-Mansur, moved to act on the “agreement”. Abu Hanifah defied the Caliph and told him: “They pledged to you that which they do not have [i.e the right to contract their life away] and you took from them a pledge which you cannot take.”[viii]

More importantly, not only did Imam Abu Hanifah رحمة الله  voice opposition to the rulers of his time and refuse to obey or endorse their commands, he also supported armed rebellion against them. The Imam financially supported the uprising of Zaid Ibn Ali against Ummayad rule and also encouraged people to stand with the uprising.[ix] Similarly, and after becoming disillusioned with the rule of the Abbassids, he voiced support for the uprising of Muhammed Al-Nafs Al- Zakiyyah against the Caliph Al-Mansur and instructed one of Al-Mansur’s military men to refrain from fighting Al-Nafs Al-Zakiyyah. As a result, Abu Hanifah was imprisoned and remained in prison until his death.[x] Although I do not aim to make an argument about the permissibility of armed rebellion, I make mention of this in order to show that if Abu Hanifa was willing to support armed rebellion, then, a fortiori, anything short of that is certainly more permissible.

Imam Malik ibn Anas رحمة الله was also detained and tortured during the reign of Al-Mansur for supporting the uprising of Al-Nafs Al-Zakiyyah. People came to the Imam asking him if they can pledge allegiance of Al-Nafs Al-Zakiyyah despite having already made a pledge to Al- Mansur. The Imam said: “You were compelled to pledge allegiance. And no compelled person can be held to a pledge.”[xi]

Imam Izzideen ibn Abdulsalam رحمة الله serves as another striking example. While in his hometown, Damascus, Ibn Abdulsalam learned that the King of Damascus, Al-Saleh Ismail, formed an alliance with the Crusaders. He had agreed to sell them weapons (to be used in their crusade against the Egyptians), and surrendered to them a number of Muslim citadels. This angered Ibn Abdulsalam who declared, “It is forbidden upon you to sell to them [weapons] as you are certain that they purchase [these weapons[ to wage war against your brothers!” The Imam denounced the King from the pulpit of the largest mosque in Damascus. He was detained and, upon his release, he went into self-exile.[xii]

The Imam moved to Egypt where his bold opposition to rulers made an appearance. Ibn Abdulsalam became known as the “auctioneer of kings” because he demanded that the princes and generals of Egypt (the Mamluks) be auctioned off in the public market as slaves in order to establish their freedom (this raises a lot of questions, but that is another topic for another time).[xiii] He refused to give any legal effect to their decrees until the Mamluks complied with his demand. The Mamluks refused, prompting the Imam to pack his belongings and depart to the outskirts of the city. However, and after having attracted a large base of followers and supporters, the entire population followed him to the outskirts of the city in solidarity with their beloved Imam.[xiv] Fearing that their state would collapse, the princes and generals invited Ibn Abdulsalam back and complied with his order. The Imam was such a strong check against the power of kings and generals that upon his death, the ruling Sultan, Baybars, said in relief “Only now is my reign secure.”[xv]

All the above indicates that Muslims have the right — if not the duty— to serve as a check against the power of rulers, especially the tyrannical ones. They should be free to demand better forms of government. The words of the Prophet Muhammed

make clear that a Muslim is rewarded for his/her opposition to tyranny. This is further supported by the actions of prominent Islamic scholars who applied that teaching in their lives. Even if we are to accept the prohibition on armed rebellion (and that is certainly a reasonable conclusion), this does not force us to adopt the opposite extreme, which is acceptance and passiveness in the face of tyrannical governments. Non-violent defiance and opposition to tyrannical rulers cannot be equated with revolution. When Muslim populations call on their governments to free political prisoners, respect fundamental rights and freedoms, and allow for the public accountability of public officials, they are enjoining the good and forbidding the evil, as per the Prophet’s instructions.

Amir Aboguddah is a JD Candidate at the University of Toronto.

OpEd: King, Ramadan, Establishment Hostility, and the Echoes of History