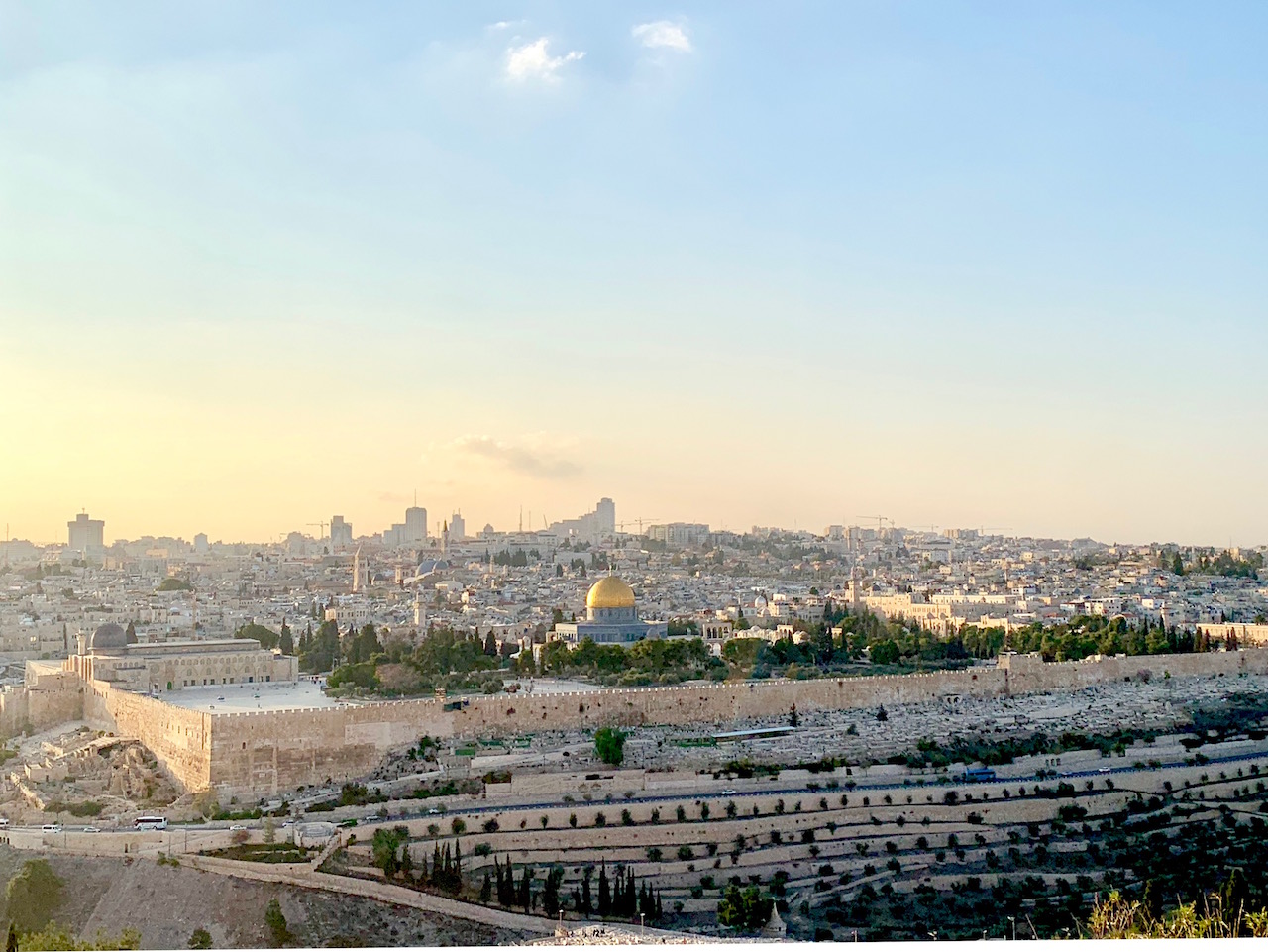 To The Holy Land: Crossing The Border | Part 1 of 4

Our group’s first stop after crossing the border into Palestine is the historic city of Jericho.

Located in the occupied West Bank near the Jordan River, this is said to be the oldest inhabited city in the world.

An oasis amidst the desert because of its natural springs, it is situated 800 feet below sea level.

The Dead Sea, the lowest point on Earth, is visible off in the distance.

The air quality is noticeably different. You can almost taste the salt and minerals on your lips.

We file into a local restaurant for lunch, but I don’t have an appetite. The gift shop next door beckons.

As I browse, the sales clerk asks if he can help me find anything, a gift perhaps.

I ask for a map of the occupied West Bank. They don’t have maps for sale, but he points to one taped to the wall. 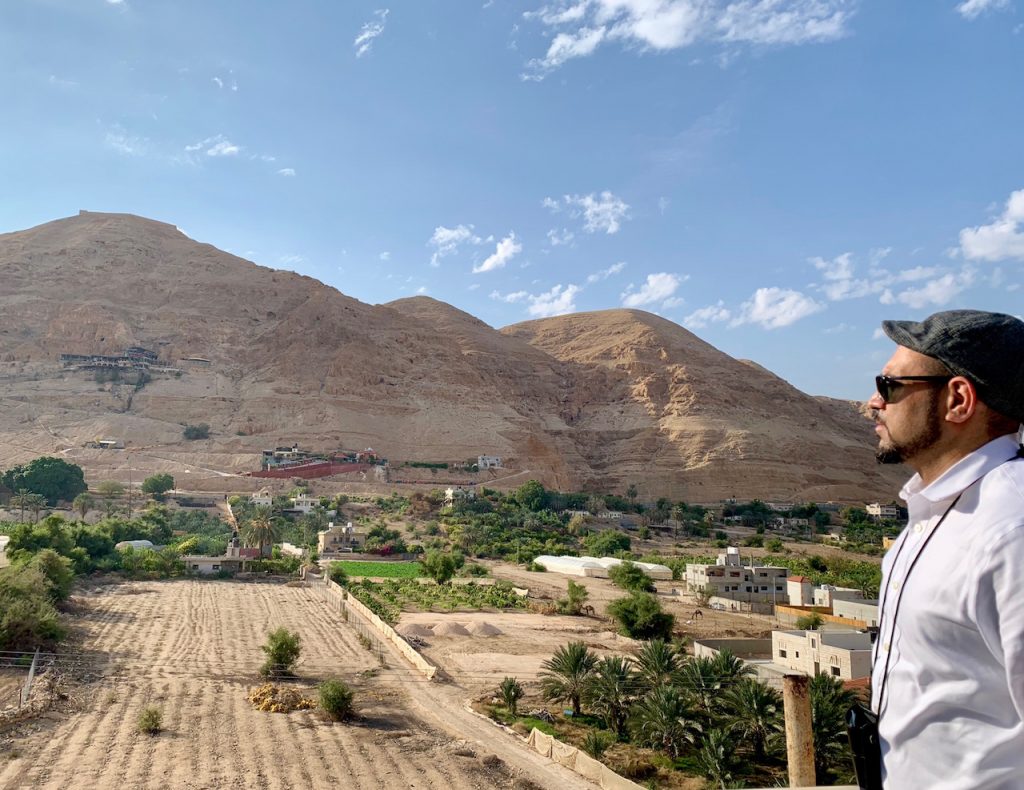 Studying it, my gaze lingers on Nabi Saleh – the home of teen activist Ahed Tamimi, who has become the symbol of Palestinian resistance.

Between 2010 to 2016, weekly protests were organized in her village after settlers backed by the Israeli government encroached on their land.

They established the Halamesh settlement, redirected villagers’ water supply and poisoned their crops.

Forms of aggression and intimidation that you quickly learn are all too common throughout the occupied West Bank.

The Nabi Saleh protests ceased after clashes with Israeli soldiers led to serious injuries and deaths.

But the injustices against the Tamimi clan and others continue on a regular basis. 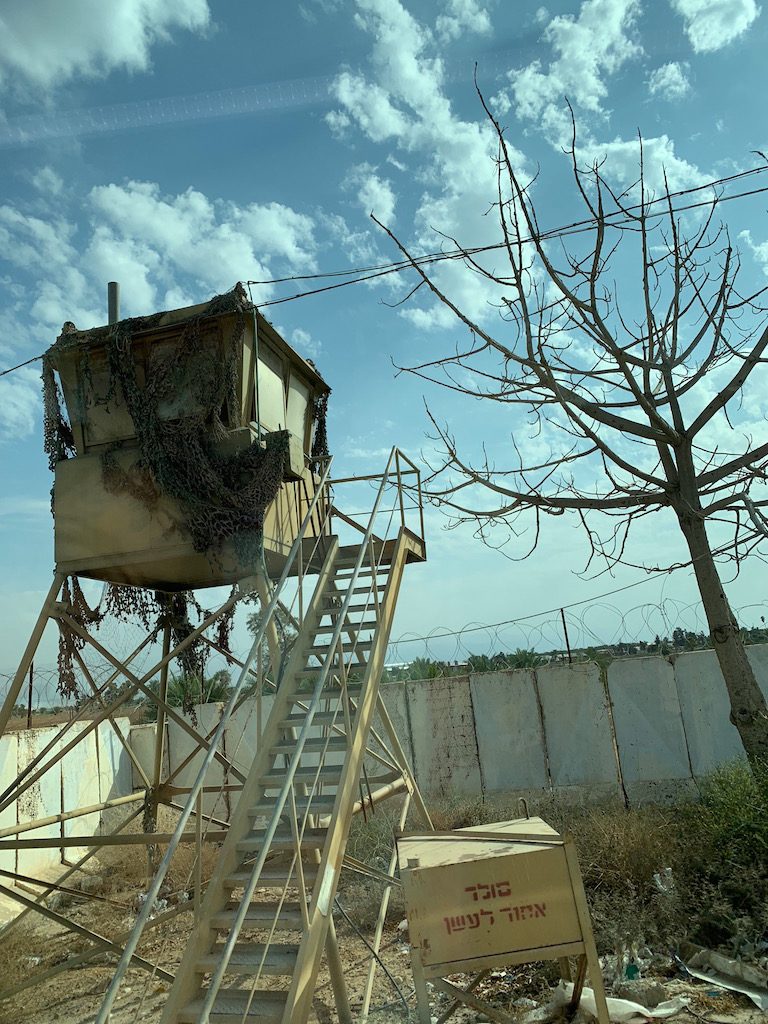 “The only way to deal with an unfree world is to become so absolutely free that your very existence is an act of rebellion.”

For Palestinians, the mere audacity to exist in this land is, in many ways, a courageous act of fierce rebellion.

In the gift shop, nestled on the counter between a tasbih rack and a cardboard box of keychains is a gold-framed print of iconic palm trees native to the city.

A thin layer of dust coats the glass surface.

Later, we learn that Israeli bulldozers arrived unannounced on the day following our visit.

What was once fertile land farmed by Palestinians to sustain their livelihood, is now acres of flattened dirt.

As we leave the restaurant and gift shop, our guide shows us to a roadside stand in a scenic spot overlooking the ancient city. 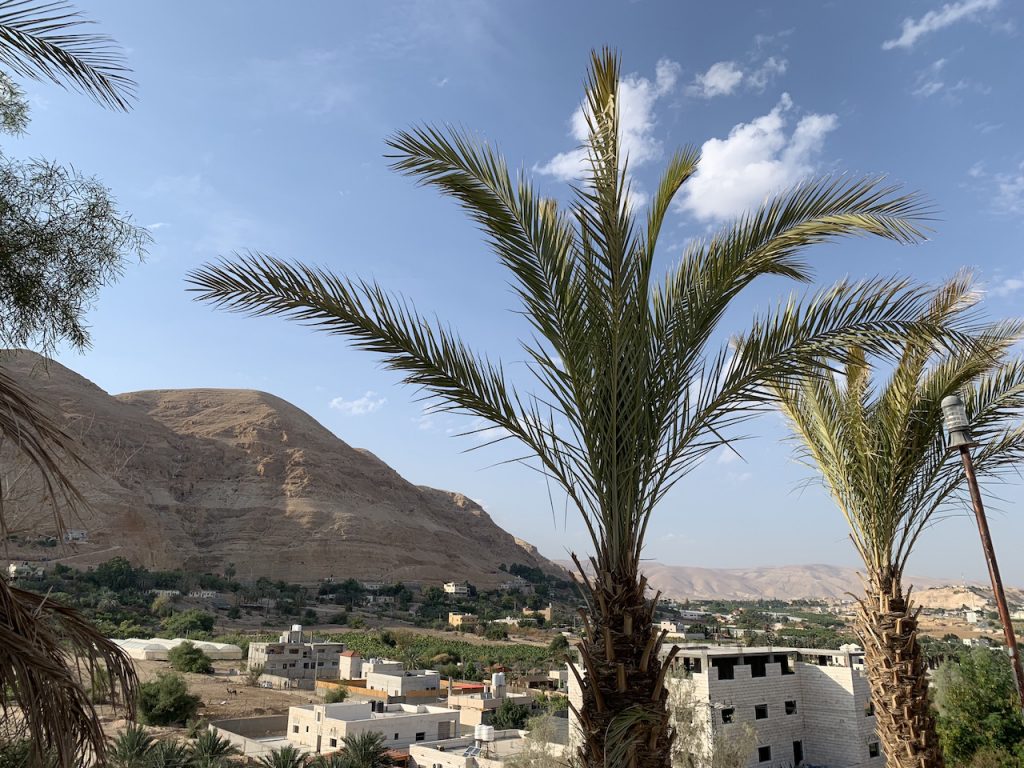 In a makeshift wooden stall spray-painted with graffiti, a Palestinian boy is selling freshly-squeezed pomegranate juice.

His sweater is too small, the dusty slippers on his feet stained with droplets of ruby red juice.

Palestine’s forced economic dependency on Israel means that it does not have its own currency.

I have not converted my money to Israeli shekels, so I ask if he accepts Jordanian dinars (JoD) as payment.

He nods, intently focused on slicing pomegranates, inserting them in the manual juice extractor, rhythmically pumping the iron handle.

Handing him several bills, I accept the paper cup generously filled to the brim with cool, rich nectar. 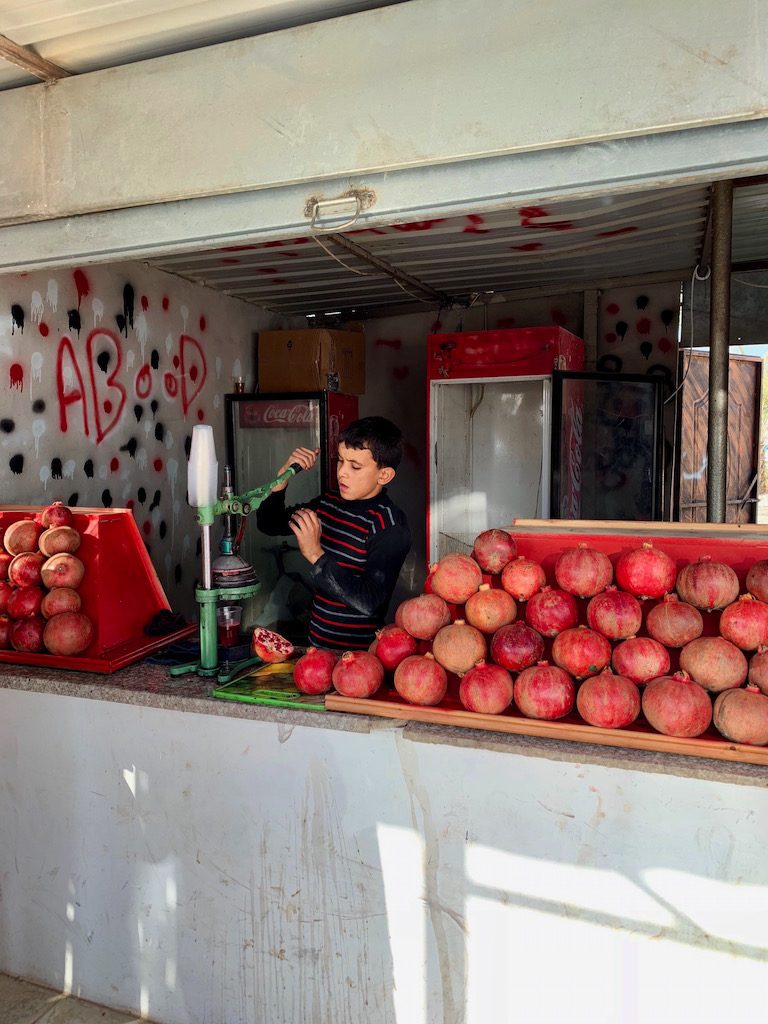 Heading back to the bus, I feel a tap on my arm; he has come to return my change.

I motion for him to keep it. He frowns, shakes his head.

He isn’t soliciting handouts. He runs a business; not a charity.

Moved to my core, I avert my face so he won’t see my tears and simply order more juice for others in our group.

Yet, in his composed demeanor, he exhibits more class and dignity than some Ivy League grads who govern my country.

He is part of a proud people, preserving his self-respect and values at a young age even while living under occupation.

Children like him have rights upon us. The world owes them our advocacy and attention.

Our group boards the bus, we continue along the highway to Al-Quds.

I doze off, awakening sometime later to the sound of a loud boom.

A girl seated some rows behind myself and my husband calls out to her father, points out the window.

Some distance away, a large, gray mushroom cloud of smoke has appeared – marring the spotless blue canvas of the afternoon sky. 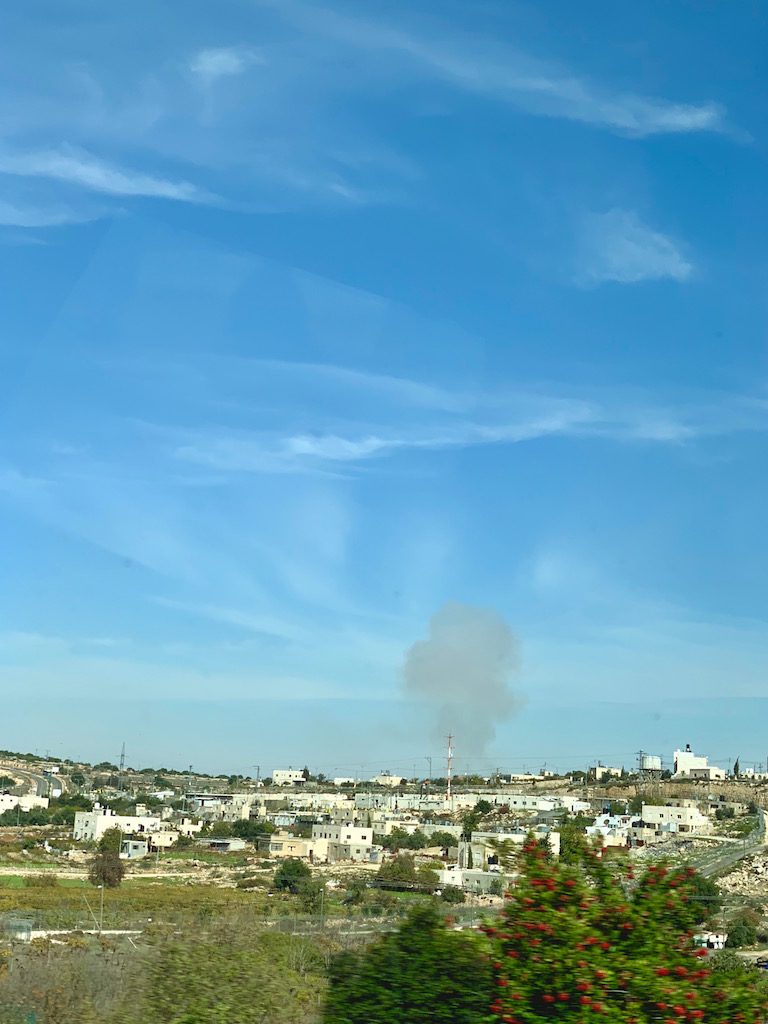 The guide picks up on the commotion in the back of the bus.

His face set in a grim expression, he reassures us it’s ok. “You’re all safe. Unfortunately, that’s a very common sight here.”

You learn when Israelis aim to tear down a Palestinian-owned home or building, they often issue a 24-48 hour eviction notice citing arbitrary permit regulations.

Then, they send in the demolition teams to destroy it.

The intended goal is to discourage Palestinians from developing their land in the hopes that they will pack up and leave – making room for more settlements.

“You’re all safe.” The guide’s words echo in my mind.

But what about the families whose homes and businesses are destroyed?

Do they choose to stay put as their final act of resistance? Do they safely make it out alive? If so, where and how do they begin to rebuild.

Questions crowd my mind, their urgency amplified in the deafening silence on the bus.

Everyone is trying to process the enormity of what we’ve witnessed.

It’s one thing to read or hear about this level of aggression. But having it affirmed in real time is jarring.

U.S. textbook definitions will contradict it, but this political oppression is a form of terrorism against these families and communities.

I have flashbacks to images of rockets falling over Gaza on my television screen.

While Gaza is far removed from the West Bank, the struggle for existence, survival and self-determination is very much the same.

As we approach closer to Jerusalem, the segregation wall appears – flanked by Israeli army watchtowers at specified intervals. 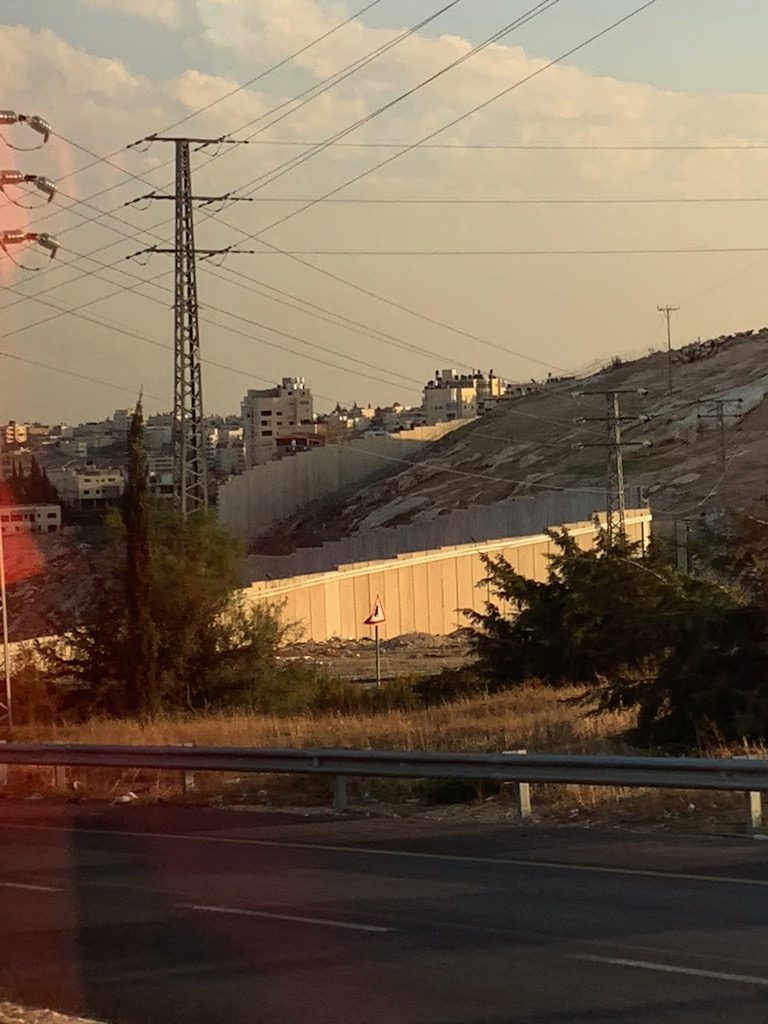 Fifteen years ago, the United Nations General Assembly overwhelmingly voted to adopt a resolution stating that the wall violates international law and should be removed.

Delving miles deep into the West Bank at parts, it’s construction was initially billed by the Israelis as a security measure.

It has since been alluded to as a future political border between Israel and Palestine, but that holds little appeal especially for many Palestinian millennials strongly disillusioned by the governance of the Palestinian Authority.

The claim that Israel is a democracy in the Middle East is openly rebuked.

According to international law, apartheid is defined as an “institutionalized regime of systematic oppression and domination by one racial group over another.”

It is symbolized by unequal racial power dynamics upheld by unjust laws that are deliberately designed to dehumanize and deny oppressed groups their rights. 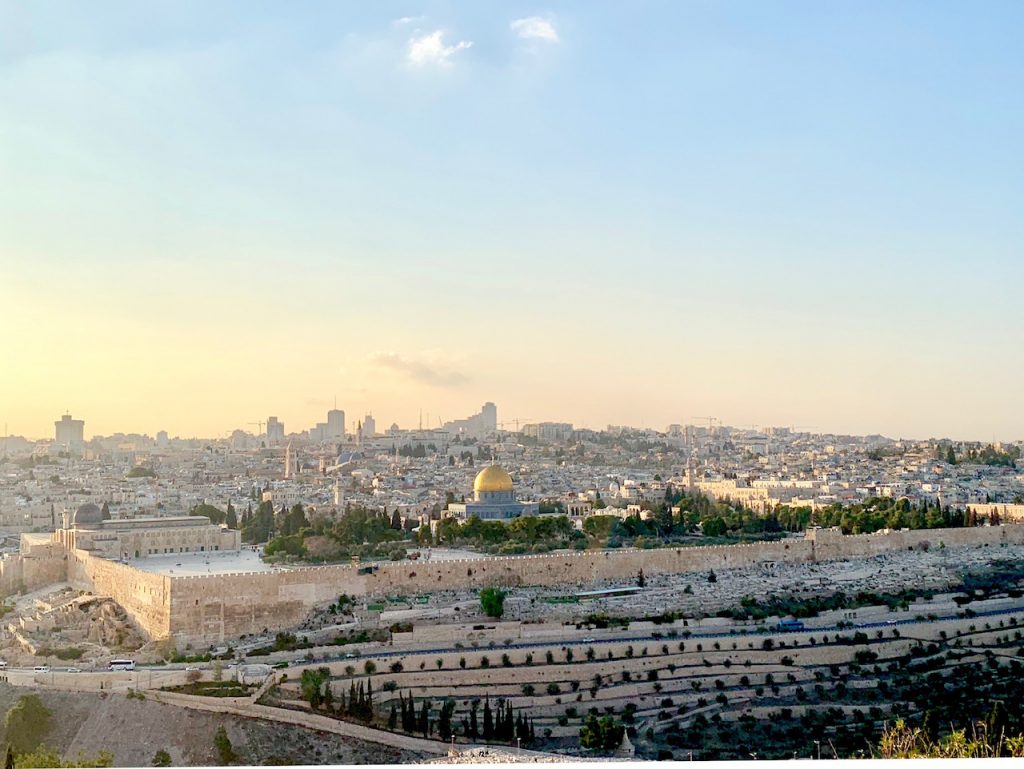 Former South African president Nelson Mandela, who led the movement to dismantle apartheid in his own country, said: “We know too well that our freedom is incomplete without the freedom of the Palestinians.”

In an op-ed for The Guardian published on October 18, his grandson Nkosi Zwelivelile wrote in part:

“We South Africans know apartheid when we see it. In fact, many recognize that, in some respects, Israel’s regime of oppression is even worse. It took an international effort to end institutionalized racism in my country – now it must happen again, for Palestinian people.”

His words resonate strongly with those who have witnessed the conflict up close.

Entering into Jerusalem, we stop at the Mount of Olives to take in the breathtaking panoramic view of beautiful Al-Quds. 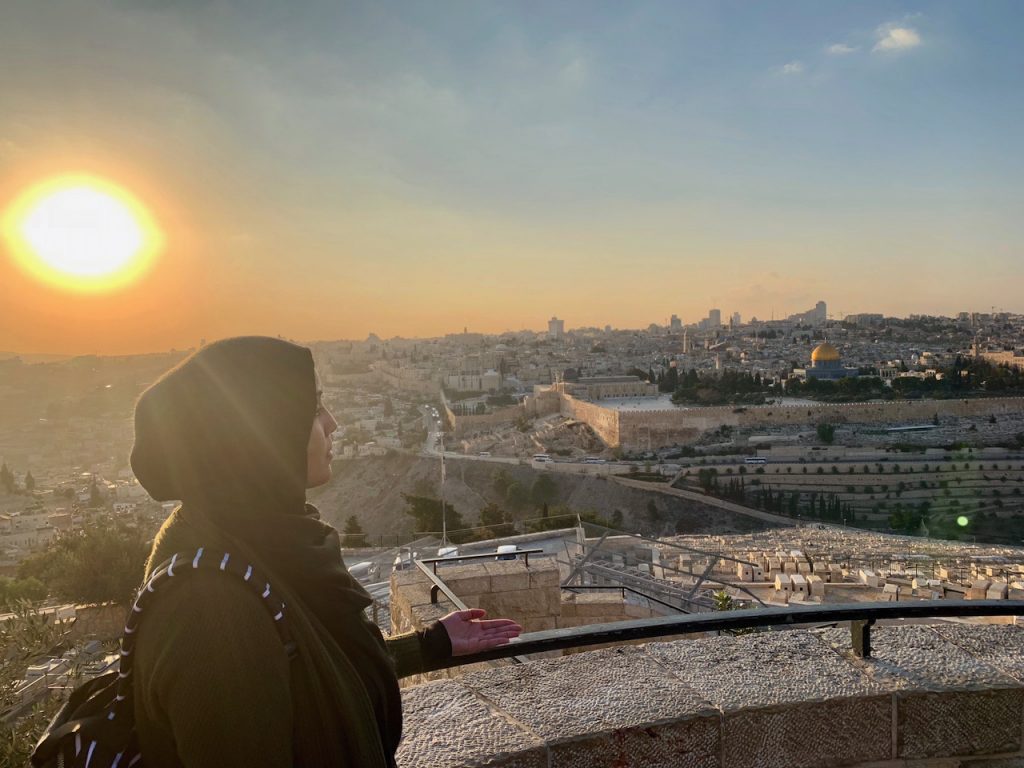 The majestic dome at Masjid Al Aqsa calls to me, glistening vibrantly in the golden sunset hour.

I’ve been privileged to travel to many countries on different continents.

But here, in one of the world’s most geopolitically tense regions, my heart is strangely infused with a growing sense of calm and peace.

Our guide points in the direction of various landmarks and holy sites revered in all three of the major monotheistic faiths: Judaism, Christianity and Islam.

I marvel at the juxtaposition of the connections that bind us through faith, and the controversies that divide us through greed, egos and insecurities.

If our Prophets and Messengers were with us today, peace be upon them all, one can only wonder how they would respond to the strife, oppression and persecution of their beloveds.

Whether you are exposed to the sanitized or actual account of the occupation is determined partly by the narratives and experiences you encounter while visiting the Holy Land.

But I have learned that you do not travel to Palestine, you do not visit Jerusalem and return home unchanged.

Zainab Chaudry sits on the Maryland State Advisory Committee to the U.S. Commission on Civil Rights and is the Director of Maryland Outreach at CAIR. She writes about her trip in her personal capacity.

Musulmamis: Parenting while Latina and Muslim