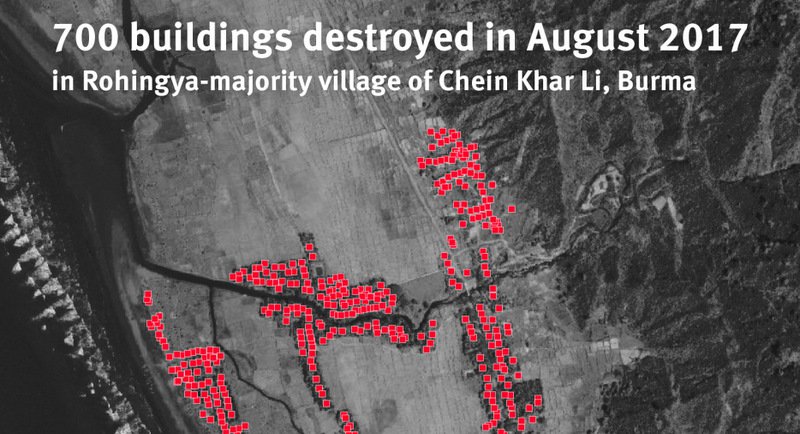 On July 31, 2017, three members of a Rohingya family were reportedly murdered by a Buddhist Rakhine militia group while they were working on their family farm in Rathedaung township in Northern Arakan/Rakhine state. As a result, tension between Rohingya and Buddhist Rakhine villagers rose; however, a clash was averted following the intervention by village authorities. On August 2, 2017, the Myanmar police reportedly cordoned off that particular Rohingya village, and a Buddhist Rakhine militia group moved in and assaulted Rohingya families and torched a number of homes. Since then the situation has escalated in the Northern Rakhine state that has led to arrests, torture, and execution of Rohingya civilians by the Myanmar police and Buddhist Rakhine militia. During that period, witnesses have seen arrivals of large contingents of Myanmar army in Maungdaw, Buthidaung, and Rathedaung Townships. Relocation of Buddhist Rakhine villagers from the outlying areas to the Buddhist monasteries and government school buildings has also been reported.

On August 28, 2017, the entire Ward No. 5 (Rohingya sector) with 437 homes in Maungdaw town, all the 55 Rohingya homes in Ward No. 3 (mixed Rohingya and Buddhist Rakhine sector), and a number of Rohingya villages including Bakaguna, Thiho Kyun, Nwayong Daung, Kwaisarabil, Kyiganbyin, Myothugyi, Dongsay, Chauk Shoung have been reduced to ashes. Destruction of homes and atrocities against Rohingya civilians in Buthidaung and Rathedaung townships have spiraled following the attacks in Maungdaw. Sexual violence against Rohingya women was reportedly widespread during the raids of Rohingya homes by the Myanmar armed forces and the Buddhist Rakhine militia.

Since the major assault on Rohingya civilian population on August 28, 2017, Myanmar armed forces and Buddhist Rakhine militia have continued to torch Rohingya homes in Maungdaw North on daily basis, and later expanded to the South.

Assaults on Rohingya homes in Burthidaung and Rathedaung Townships have been stepped up in recent days. An estimated tens of thousands of Rohingya villagers have been reportedly taking shelter in the hills and forests as they are headed towards the Bangladesh border at a 16 miles distance. All the 6 villages in Rathedaung Township has been completely burnt down, and the entire Rohingya population of an estimated 9,000 from the 6 villages is currently taking shelter in part of Maungdaw South that have not been torched. A total of 11 Rohingya villages in Buthidaung North have been completely burnt down, and the remaining 46 villages in the area have been deserted. Over 80,000 Rohingya have fled Buthidaung North, and most of them have reportedly made it to Bangladesh after crossing the Mayu range and the Naf River.

There is no cessation of assaults by the Myanmar armed forces in Maungdaw and Buthidaung Townships as of September 14, 2017. Several villages that have not been assaulted are empty as the villagers have fled to safety across the border or remained in the hills and forests. Buddhist Rakhine militia have been roaming in and around the villages and torching homes. Frequent outbreaks of fire in the deserted villages have been seen from the distance from Bangladesh side, according to sources in Bangladesh.

The Government of Myanmar is also engaged in extensive misinformation campaign. Fake news, fabricated testimony, doctored video clips, and photoshopped images have been produced and widely distributed by the Government of Myanmar . This was done for further incitement of sectarian violence and conducting a campaign to undermine or overshadow the authentic news reports, images, and video clips. Further, Myanmar Government have organized individuals from Hindu community with physical resemblance to Rohingya for staging arson to manufacture false evidence for its claim that Rohingya are torching their own homes. 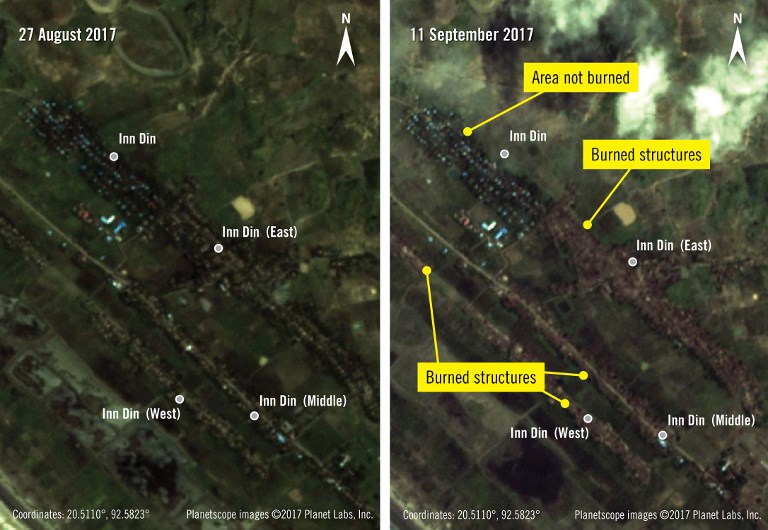 These satellite images courtesy of http://www.planet.com, with analysis and annotations by Amnesty International, show the area of Inn Din (Aan Daang), Myanmar, on August 27, 2017, (L) and on September 11, 2017, (R).
According to Amnesty, the before and after images show the areas allegedly burned by the Myanmar military. (AFP PHOTO / http://www.planet.com / MANILA BULLETIN)

How the Progressive Left Wants to Change Islam in America

A Du’aa Better than Hours of Worship