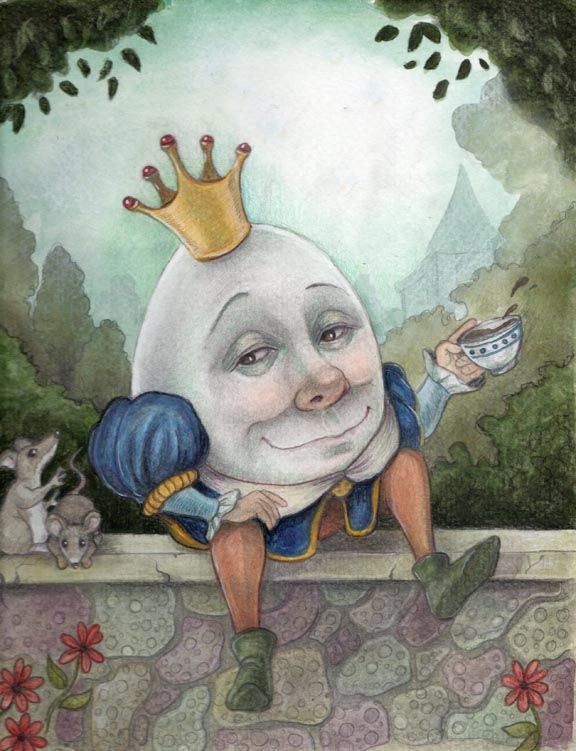 The story of Humpty Dumpty’s fall from his seemingly comfortable position on the wall is undoubtedly a sad one. The poor fellow sitting at the bottom of the wall shattered into pieces, surrounded by the king’s horse’s and men, desperately trying to piece him back together would often place me in a melancholy mood for some time. After all, I was but a child.

Looking back at the childhood nursery rhyme today, I feel compelled to look at the well-known story from a different perspective. Modern man has fallen from his wall. Many walk the streets of our cities broken psychologically and spiritually,  ready to snap at the slightest instigation. And online tempers are even shorter. Mentally “broken” sitting at the bottom of the wall. Sadly, in this modern version, the king’s horses and men just keep walking by, perhaps choosing to look at him as a victim of his own poor judgement. In 2016,  57 percent of adults with mental illness receive no treatment throughout the nation, and in some states (Nevada and Hawaii), that number increases to 70 percent. 64 percent of youth with depression do not receive any treatment.  Even among those with severe depression, 63 percent do not receive any outpatient services.  Only 22 percent of youth with severe depression receive any kind of consistent outpatient treatment (7-25+ visits in a year).[1]

The subtle beauty in the original story lies in the collective effort of the king’s horses and men working together to heal and fix this one man.

The mass indifference to Humpty’s plight, has led to a increasingly high demand for people who can simply have the ability of working with other people. In 2015, the education economist David Deming at Harvard University found that almost all job growth in the United States between 1980 and 2012 was in work requiring relatively high degrees of social skills. The demand for social workers is projected to grow 12 percent from 2014 to 2024, faster than the average for all occupations.

What does it mean to Communicate?

The English term ‘communication’ has evolved from the Latin words ‘Communis and communicare’. Communis is a noun word, which means common, commonality, or sharing. Interestingly, we find ourselves “communicating” through means that don’t convey the emotional human element of speech. Distance does not encourage understanding. So long as we communicate solely through mediums that allow us to remain distant from the actual objects of out communication, we will increasingly find ourselves less able to realize and empathize with the struggles of those with whom we communicate. Traditionally, communication embodied a coming together in time and space of both parties. This, in my estimation, is the way we find “common” or “sharing” in the Latin root.

Fuses are growing shorter and shorter, online insensitivity is viral, and keyboard warriors often forget that on the other side of the device through which they text, is an emotional being like them. We need more people who can connect with people on an emotionally intimate level. Emotionally investing in the struggles of others means that one has the desire to understand the struggles of another human soul, coupled by a desire to heal them. Of course, compassion and empathy are emotionally taxing, exhausting, and under-appreciated. But one’s personal ability to realize that there is purpose in struggle, and pass that knowledge on to the next person, is nothing short of prophetic.

Emotional Labor is service to one’s own self

As we teach children how to code and speak the language of computers, we must also teach them the language of hearts and emotions. The direct unemotional method of speaking to a computer is seamless and exact while communicating with emotional human beings is nuanced and frustratingly difficult.

This narration holds the key to our communal salvation and rectification. A realization that when we work to heal the pain of others, we are in fact healing our own pains, lessening our own burdens, and relieving our own pain. More eloquently stated by the Prophet (peace and blessing be upon him):

At least they tried.

Surah Hud Has Made Me Grow Old