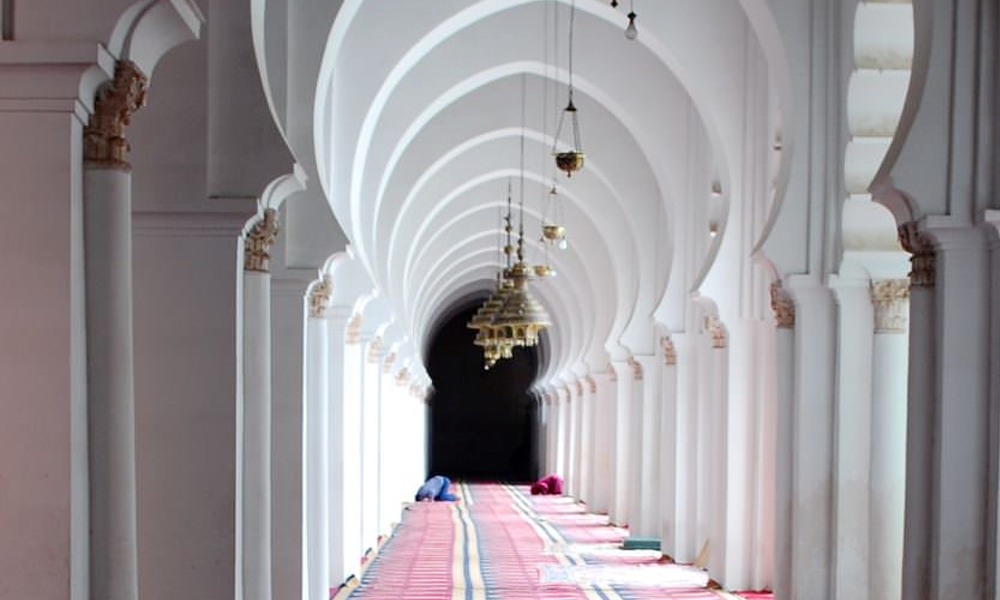 In the name of Allah, the Most Merciful, the Grantor of Mercy.

Many times, the vicious rat-race of the modern lifestyle cheats the Muslim of their greatest resource; a meaningful connection with Allah

. Even when we stop to squeeze in the prayer before its time expires, or resort to duâ’ (supplication) after all else fails, the enjoyment and transformative force of these devotions is largely non-existent in our lives. Even those who notice how tasteless life has become due to superficial connectivity (read: social media), their resolutions end at reconnecting with their family and loved ones. Although important, can family ever love you, rescue you, deter you, heal you, appreciate you, understand you – as Allah can?

For this very reason, Allah

made it crystal clear that we should celebrate the rope He extended from the heavens, and the fact that He made you of its people solely by His grace, and that these two are greater than everything life has to offer. “Say, ‘In the bounty of Allah and in His mercy – in that let them rejoice; it is better than all they accumulate.” [Yoonus (10): 58] Several companions of the Prophet ﷺ would say, “The bounty of Allah [referred to here] is the Quran, and His Mercy is Islam.” Those two are better than everything humanity can accumulate. It’s the life money cannot buy, the clarity that no genius can discover, the strength that vanquishes armies and anxieties, and the inner-peace that no tragedy can undermine.

Honestly speaking, who finds fulfillment in their servitude of Allah?

Who lives that feeling of privilege which Bakr al-Muzani (رحمه الله) expressed when saying, “Who is like you, O son of Adam? You have been given unrestricted access to [your ablution] water and the prayer?”

When al-Husayn b. ‘Ali (رحمه الله) would wash up for salâh, they would ask him why his face would always go flush, to which he responded, “Don’t you know who I am about to stand before?” Can we identify the last time such an awe overtook us?

As we fulfill our “needs” for gizmos, gadgets, likes, and shares – do we pity ourselves like ‘Abdullâh b. al-Mubârak (رحمه الله) pitied us when he said, “How tragic [is the condition] of those addicted to this world; they left it without tasting the most delightful thing in it.” They asked, “What is that?” He said, “Being acquainted with Allah, the Exalted.”

Shaykh al-Islâm Ibn Taymiya (رحمه الله) says, “Whoever becomes accustomed to isolating himself [at times] for intimately conversing with his Lord, the Mighty and Majestic, he tastes such a sweetness in being acquainted with his Lord, and such a bliss in speaking to Him, that the world and everything in it becomes petty in his eyes. For this reason, one of the early Muslims said, ‘I could have a need from Allah, so I call upon Him, then find such a delight in knowing Him and a sweetness in conversing with Him that I don’t wish that my need be immediately fulfilled – out of fear that this [feeling] would leave me, for the self only cares for its share, and it turns away upon receiving it.’”[1]

Another early scholar said, “I supplicate to Allah for a need, and if He fulfils it, I become overjoyed. If He does not, I am overjoyed tenfold. This is because the former is solely my preference, and the latter is the choice of Allah, Knower of the Unseen.”

Are these stations actually attainable? Absolutely, so long as you are committed to changing your lifestyle – albeit gradual – and fighting to remain protective of that commitment. It may sound like a grind, and it might be, but be certain that your compensation – in both worlds – will factor in your degree of difficulty. After all, Allah is ash-Shakoor (the Most Appreciating). He will appreciate your attempts even if you falter, and make it worth your while in ways unimaginable. He will infuse you with strength from the moment you decide to try and climb, and He will lace the cuts and bruises with a sweetness that carries you forward till you meet Him.

Also, be sure that avoiding this “grind” is a façade. Our dunya (material world) offers little comfort with much rigour, while our deen (religious commitment) demands some rigour for much comfort in return, even in this life. Many of us believe, even if we dare not speak it, that an upgrade in our religiosity means embracing a restrictive lifestyle. The Quran, however, tells a different story. At the onset of Surat TâHâ, Allah

says, “We have not send down to you the Quran that you become distressed.” [TâHâ (20): 2] And at its conclusion, the Most High reiterates, “And whoever turns away from My remembrance – indeed, he will have a constricted life, and We will gather him on the Day of Resurrection blind.” [TâHâ (20): 124] Though this stands true for this world, the Prophet ﷺ adds that they will be constricted in their graves as well, to the point that their ribs intertwine, before being resurrecting blind on the Last Day. Such a fate was only suitable, for they chose the tight life in this world, and never made time to appreciate the light Allah shined with His Prophet ﷺ.

Therefore, Allah chose you, by guiding you to Islam, because He wants prosperity for you and an eased life sheltered in faith, while most people live empty, vulnerable lives. When was the last time you stopped to consider this immense privilege Allah has favoured you with? “Look how We have favoured [in provision] some of them over others. But the Hereafter is greater in degrees [of difference] and greater in distinction.” [al-Isrâ’ (17): 21] Others were smarter than you, some had better resources than you, but it was you He chose to guide. Will that not give you pause, and a fervent to capitalize?

even encourages you to imitate others – beginning with the Prophet ﷺ, then his matchless Companions, then the righteous scholars and dedicated worshippers who toiled throughout history to recalibrate their hearts and minds for the better. This is also why the Quran calls us to keep good company, all because inculcating these spiritual values requires mentorship, and a diffusion of faith from one heart to another. Reading their legacies definitely qualifies, or else the Prophet ﷺ would have only been an inspiration for a single generation, and we all know how his story never falls to infuse us each time.

Finally, “It’s not about how good you are, it’s about how bad you want it.” In high school, we wrote that line on our game-sneakers, only realizing later that much worthier ambitions than basketball deserved that tunnel-vision determination. But the statement certainly stands true in deen: your survival depends on that heightened sense of urgency within you, as the Prophet ﷺ said, “Whoever fears will begin his journey [extra early] in the middle of the night, and whoever begins his journey in the middle of the night will surely reach the destination. Indeed, the merchandise of Allah of precious. Indeed, the merchandise of Allah is Paradise.”[2] Did you get the message? Keep the flame on. Focus on it. Hover over it. Protect it. Don’t let the raging storm around you distract you from it. You have no idea how many folks – starting with Shaytan himself – thought it depended on how good you are, or how many books you’ve read, or talks you’ve heard, or fans you’ve secured. It’s not about any of that; it’s about that burning flame inside you sincerely longing for Allah.

Make time to nourish that longing through routine devotion, regularly reflecting on the Quran, and by asking Allah for it, as your Prophet ﷺ used to do: “…and I ask You for the delight of looking at Your face, and [for] the longing to meet You (wa asa’aluka ladhat an-nadhari ilâ wajhik, wash-shawqa ilâ liqâ’ik).”[3]

Salutations and peace be upon our beloved Muhammad, and all praise be to Allah, Lord of the worlds.

An Appeal to the Kingdom of Saudi Arabia: Free All Rohingya Detainees in Immigration Detention Centers

How to Welcome Ramadan in Turbulent Times