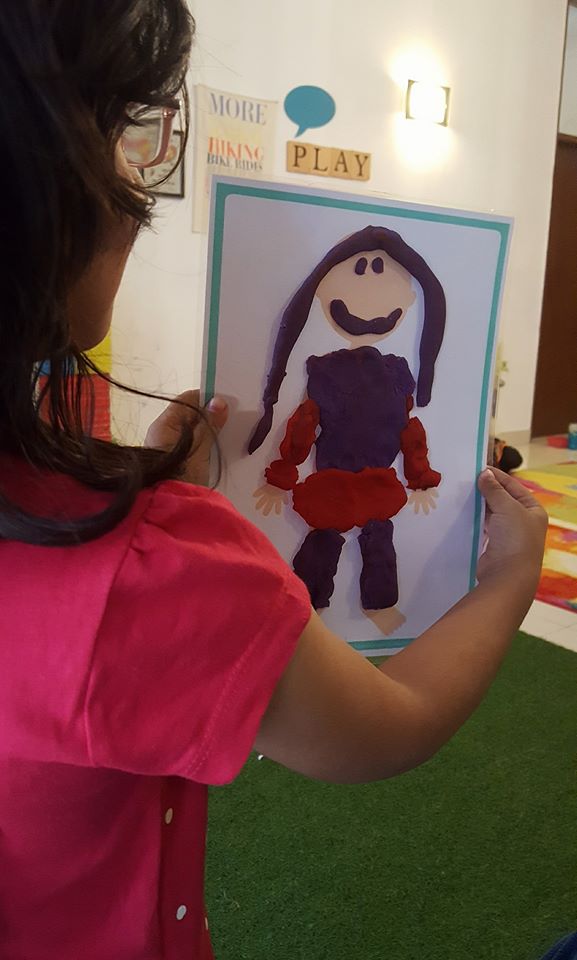 It’s really all for her.

This whole mad business of trying to make our house of dreams.

Just a month or so ago, we moved into our little portion at my inlaw’s and are busy doing it up. But before that, for the past year we’d been at my mom’s. Hums had still been in Dubai and the kids and I had moved to Karachi.

We’d been living at my moms, out of one bedroom, one cupboard and it had taken a toll on all of us, of course it had. But I don’t know if it’s because she possesses verbal skills and her brother doesn’t, or because she is a girl, or just a person more in tune to these things, somehow my five year old daughter, Beti, verbalized the lack of home in our lives more often than any of us and in more heartbreaky terms than I would’ve given her credit for.

“How come WE don’t have our OWN home, that would be so nice and happy for us?”

“One day, I would really like to have a special drawer of my own. Can I have that, just a tiny drawer, one day, Mumma?”

I think under any other circumstances, I would’ve been the first to hush away and brush away the dramatics and perhaps, even embark on a few philosophical declamations on The Importance of Gratitude and Counting Our Blessings. But lately I have been noticing my own inner twinges of guilt when it comes to Beti. I know how many times I have snapped at her because I have been concerned about her brother. How many times I have said no to her and yes to him. How many times I have had to make an attention-giving choice, a purchasing choice, a what-cartoon-to-watch choice and it has been him.

His temperament and our worries has demanded it. Clawed at it. Roared for it. In our home, he has drawn the lines and we have all toed them.

Being sister to Beta hasn’t been easy on my daughter. She was born exactly three years to the day after him, at a time when his issues – sensory, emotional, motor etc etc – were just beginning. She’s gamely toddled along behind us since then, as we immersed ourselves fully in figuring him out. She has often the target of his rage and my frustration. Frequently the one cajoled in to giving up on a desired possession or request so his will could be appeased.

And maybe in a way that’s always the case, with all siblings. It’s just part and parcel of this smoothing of the edges that comes from family, from being brothers and sisters, from being second born etcetera etcetera.

But maybe it’s not. And I suspect other parents of special needs kids might agree with me. The siblings have an extra, tiny or huge, burden on them. An expectation. A sharing of the griefs and joys. A carrying of the responsibility.

Siblings of special kids are pretty darn special themselves, we are supposed to say cheerfully. It is a gift to them, sure, because it teaches them kindness and empathy and inclusion and love and gratitude in a first hand manner, like no other. But in more honest and vulnerable times, there is no denying that there is a slightly shadowy element to it too.

There is a lot of sacrifice. There is pressure. There is disappointment. There is confusion.

And I see the repercussions in her. I see the anxiety and the uncertainty. The desire for approval. The erasure of her identity as she, unbeknownst to maybe any of us, somehow merged into him. She assumed his habits and quirks and so much of him that the lines blurred for all of us.

When did I start referring to them as one “BetaBeti”? How do I know him inside out like the back of my hand, but she is still a little bit of a mystery to me? Who is she as a person?

I have picture after picture after picture of him doing something, oblivious to the world, (lining up his alphabet, weighing all his toys, painting rainbows incessantly) and she is sitting beside him looking at him with awed, puppy dog eyes. There have been hour long car rides in which she has scratched his back the ENTIRE time because he wanted it and she knows it calms him.

It kills me. It lifts me.

On the days that it is killing me, I wonder at the effects on her and whether she will resent him one day. I wonder at the judgment that will one day come on my parenting, when I will stand in front of the ultimate Judge. “I wanted to be fair and just to all my children. I did, ya Allah, I did. But, but, but….” I will trail off. I don’t know if I will know how to explain that it wasn’t, that it isn’t, that I loved Beta more, or I favored him deliberately. It’s just that he needs me more. More of my time. My energy. He takes up more of mental real estate because of who he is. And I figure to myself, I tell myself, “the girls will be okay.” This over focus on him was just a coping mechanism. I didn’t know how else to cope.

On the days that it lifts me, it is because I am able to see that she is sturdier than I give her credit for. That all of us humans are. That she is already learning to gracefully deflect or distract him when he unfairly howls for something. That being Beta’s sister is a gift from Allah to her in that she gets to practice compassion and kindness, yes, but also because he is a really inspiring person. She is learning what absorbed, focussed study of any topic of interest looks like. She is witnessing what it means to devote oneself whole heartedly to perfecting a goal or a target. She is right there when her brother’s occupational therapist comes to our house and does wheelbarrows with Beta, who does them till his arms quiver with the strain, because he is so intent on “getting stronger”. She is right there when he reads aloud every evening and delights over “funny” words or turns of phrases encountered in one of our many picture books. “‘It was a wintery evening in Chile’, oh thats so funny, Mumma, that’s so funny because you can say its chilly in Chile.” He will chuckle and she will grin too, in an early recognition that books can be sources of joy.

It is during these days that I am able to muse: is there any relationship more expansive and more formative than that of siblings? I want my kids to be close, super-best-friends — always-there-for-each-other, close. I want them to have the kind of comfort that comes with having shared a lifetime of experiences together, and I want it to last forever because I believe with my very core that the kind of solace and growth they will derive from this relationship is unmatched by any other. Maybe my hope for them has more to do with my own feelings towards my sister and brother than any consideration of Beta and Beti. I consider my siblings to be two of the smartest, kindest people I have ever known. Through the interests they pursue, the books they read and the conversations they hold, they have introduced me to different worlds of thought that I might never have encountered on my own. I know they always have my back even when I don’t even know that having my back is needed. And that they have rounded out all my edges, those “special needs” that each one of us carries within us.

Right now, I don’t have the space to give my daughter her own room (how I WISH I did!) but I want to try and give her a corner that is just hers. Something purple and glittery and girly and HERS. It’s not me trying to buy her love or woo her with material things, but just an effort, an exercise in drawing boundaries where none have existed before. A tangible declaration that she is not just her brother’s sister.

I want Beti to have her own special place because she deserves it. Because I (rightly or needlessly, you decide!) carry guilt of the effects of the past five years which I can see on her temperament. Because I want her to know she has something that is all her own, that Beta has no part in. That she is valuable and worthy. That Mumma knows she hasn’t done very well by her on many, many days, but she wants and intends to always do better and be better than before. InshaAllah. And also, that Allah Ta’ala always, always, always understands our particular predicaments and is more Merciful than all the confused mothers in the world.

Aaron Hernandez’s Death And The Responsibility of Sports Fans