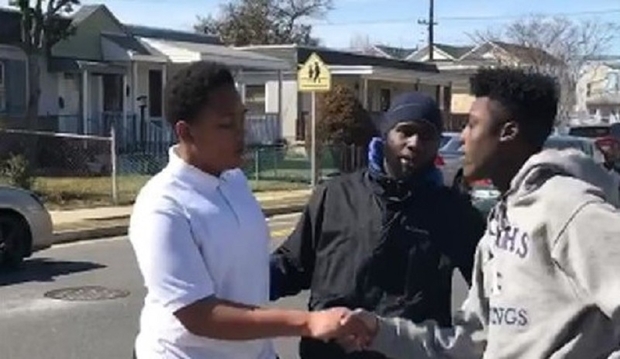 I’m not sure if I ever interacted with Ibn Ali, I just noticed him, and later his wife and kids, among those sitting in an Islamic class in Masjid Muhammad of Atlantic City —seeing a family learning together were reason enough to smile. Recently that man that I only happened to notice in an Islamic class became the object of nationwide attention for being the star of an unusual viral fight video. Sadly, teens now not only have to live with the consequences of their classmates knowing they got beat up in a fight -they must also deal with humiliation on the Internet. That’s exactly what Ibn Ali feared when he broke up a fight between two young men as their so called friends (as Ibn Ali cautioned them, are they your real friends?) recorded the scene on their phones. He advised the boys to think about the consequences of fighting only to become the subject of someone else’s cheap entertainment, they were men now and maybe this wasn’t the course of action they wanted to take. He not only ended the fight but made the boys shake hands. This act of leadership and humanity towards a group so often demonized (black + men + teenagers) propelled Ibn Ali to instant fame as a local hero and do-gooder.

There’s a lot of ways instant Internet fame can go wrong. So many people good, bad or otherwise become absolutely unbearable when the spotlight reaches them. So many of us have no real purpose in life or otherwise that we don’t know how to use fame if we ever achieve it. So much so that I fear for people who achieve instant fame. There’s probably few other surefire ways to lose one’s soul. But Ibn Ali clearly had a message despite his being plucked from obscurity and not asking for fame. Why did he do it? Because he’s Muslim and that’s what Muslims do. That simple line is the most honest bit of dawah I’ve heard from any Muslim in the limelight (momentary or otherwise).

Ibn Ali brought up Islam when he didn’t have to. He pointed people to Islam, he didn’t run away from it. And he gave God and Islam credit for his good deed. Does this sound familiar? No, not at all. The unwritten script amongst Muslims these days is to avoid at all costs talking about Islam and Muslims if one does talk about it be vague; if controversy comes up, deflect; and make being Muslim as normal and as inconsequential as eating apple pie -which you must insist you like a lot.

This is largely the fault of Muslim leadership in America turning away from black Muslims and toward immigrant Muslims. Despite our shared faith, we have completely different sociopolitical realities. Black Muslims could care less about being accepted by the mainstream -when you’ve been rejected from the beginning of your forced migration eventually you become indifferent to their acceptance. Immigrant Muslims, on the other hand, choose to leave their countries in search of the American dream which includes acceptance by the mainstream. A project that was going fine until 9/11. That connection to foreign terror made immigrant Muslims have to fight for acceptance in a way they never had -which explains the nauseating “I’m just like you” rhetoric. But Black Muslims like Ibn Ali have a strange freedom only allowed to outcasts, to basically keep being themselves, business as usual.

My dad never stopped wearing the jalabia or kufi after 9/11, it really had nothing to do with him and he never had to prove it didn’t. When many immigrant Muslims talk about Islam they speak from a place of fear when Black Muslims speak about Islam,  we speak out of freedom. That freedom allows for an unadulterated dawah that isn’t concerned with naafsi naafsi.  The concern is not how will this make me look?. It’s just concerned with truth. Ibn Ali didn’t set out to do a dawah campaign and in reality, we don’t need to. With out any money, fancy lights, or professional cameras, Allah chose Ibn Ali to speak and to say “Islam is the reason why I’m on the right path”.

Is that a good PR answer? Is that the kind of answer that with make Americans cozy? Was it well researched for virality? No, but it is exactly the kind of dawah that makes a real impact and changes hearts for the better.

Nuriddeen Knight is an interdisciplinary instructor, writer and counselor. See her initiative: Nooralshadhili.com and read more from her blog: bythefigandtheolive.com

Lessons from a Rockstar