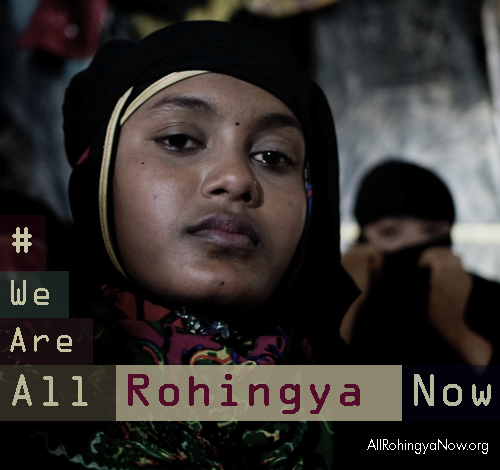 The plight of the Rohingya, you must have heard about it by now: one million people living in Myanmar, formerly known as Burma, in the state of Arakan (renamed Rakhine) on the coastline bordering Bangladesh. Denied their right to citizenship by a law passed in 1982, the Rohingya are the world’s most persecuted minority. There are at least another one million living in exile, many of whom have shocking stories to tell of how they escaped the persecution, now dreaming of one day returning to their homeland, but they know it’s a far off dream.

I was first introduced to their catastrophe in July 2012. It was just one call from a concerned activist friend travelling in that area that obliged me to look. What I found to be happening was so horrific, and so hidden, that I felt compelled to do something.

In my naivety, I started to frantically call on media and human rights organisations to urgently report and act. I was shocked that such atrocities could be happening, in this day and age, and no one seemed to know about it. I thought that once the media got hold of the story it would be big news, and people would come rushing to help. I thought that the United Nations would be compelled to protect the Rohingya when they had received information about the unfolding genocide. How wrong I was.

Much has happened since then. After the initial attacks where thousands were systematically rounded up by the military and herded into internment camps, there was a second well co-ordinated attack in October 2012 that cleared much Rohingya land overnight. Villages were levelled to the ground, making way for new developments, in the region of Kyauk Phyu, Myanmar’s new economic development zone.

“There’s no oil in Burma, that’s why no-one will act,” I hear repeatedly complained on social media. This is wrong. The entire region in question was up for tender for oil and gas exploration. Hardly a country in the world wasn’t interested in winning contracts for their private sectors. In addition, a new oil gas pipeline was about to start pumping oil and gas from the coast where the Rohingya lived, to take it up to China, thus cutting out the need to carry it all around the Indochina Peninsula. A deep sea port was being built in Rakhine, to take in oil tankers from the Middle East.

This whole area of Rakhine is key to the future development plans of Myanmar, which is key to the development of the entire South East of Asia. What is happening now to the Rohingya must be seen in the context of what is happening in the light of economic developments. It cannot be dismissed as just coincidence that some of the final sanctions were lifted by the US and blacklist scrubbed, less than 2 days before the recent ‘clearance operation’ in the township of Maungdaw began.

Our recently launched campaign, #WeAreAllRohingyaNow, intends to cut through the religious narrative. For certain there are religious and ethnic tensions in Myanmar, but these have been allowed to foster, for military gain. The Rohingya are used as a scapegoat for the country’s problems: an irrational fear of Muslims is being used to rally the rest of the population in support of the military who offer security in the face of a changing world (hmmm.. remind you of anything happening anywhere else in the world maybe?). But ethnic tension is not the cause of the problems. What is driving the military-led persecution at this time, is the desire to redevelop this part of the land, and it is not just the Rohingya who are suffering, but also the local Rakhine people too, as land is grabbed and resources exploited, with little if anything returned to the people who live there. So long as public attention is kept firmly on driving the Rohingya out, exploitation by the military and their investors will go largely unnoticed.

Our campaign is going to be approaching those corporations who are investing in Myanmar, to ask them to face up to the responsibilities that come with the power that they hold. The United Nations will not act without permission from our politicians, yet our politicians are always constrained by economic interests. Multinational corporations hold more power than many of us realise, and they should use their powers for good. If they do not, then we, as consumers, should hold these organisations to account.

One multinational corporation that has intentions to set up its central office for South East Asia is Unilever, the third largest consumer goods company in the world. They have already invested over half a billion dollars in Myanmar. They profess to be forward-thinking in their stance as an ethical company, under the leadership of their CEO Paul Polman, who actually encourages consumers to call on big businesses to do more, and to withhold our spending from them if they do not.

For this reason, #WeAreAllRohingyaNow reached out to Paul Polman, with an open letter, calling on Unilever to take a stand for the rights of the Rohingya. Due to pressure from the campaign, Unilever did take a big step forward, in tweeting their support for the Rohingya and adding their company’s name to a letter regarding the Rohingya that was addressed to the United Nations and signed by Paul Polman in December. However, we are still awaiting their reply to our own letter asking them about their responsibilities in regards to the Rohingya and their investments in Myanmar.

We believe that large corporations should be doing much more to protect the Rohingya. It is simply not an option for these organisations to be investing in Myanmar, in the face of an unfolding genocide, whilst remaining silent. In addition, they should not be passing the buck to the United Nations, who we all know are powerless due to governmental business constraints. It is they themselves who hold the leverage with the Myanmar military to bring about a satisfactory solution for the Rohingya: the restoration of their citizenship.

Our campaign is not asking companies to pull out of Myanmar, but we are asking them to act in the interest of human rights, and to stop this genocide. We have the capability to organise large scale actions, such as boycotts, but we would much rather keep a positive relationship with businesses as much as possible. This is a genuine outreach, to encourage corporations to start living up to their ethical responsibilities, and to do far more than issue statements of concern, but to act.

Our campaign has a ground breaking strategy that is already reaping results; it is well organised and evolving. We are sending out action alerts to everyone that registers, via email and Twitter direct message, which are simple steps anyone can take in their own time, from anywhere with an internet connection, that will bring added power to this campaign. Please take a moment to register to join us, and be a part of this exciting new movement for change: bit.do/rohingyaregister

@jamilahanan jamilahanan1@gmail.com Human rights activist, Jamila Hanan, based in the UK, is spearheading the #WeAreAllRohingyaNow campaign.