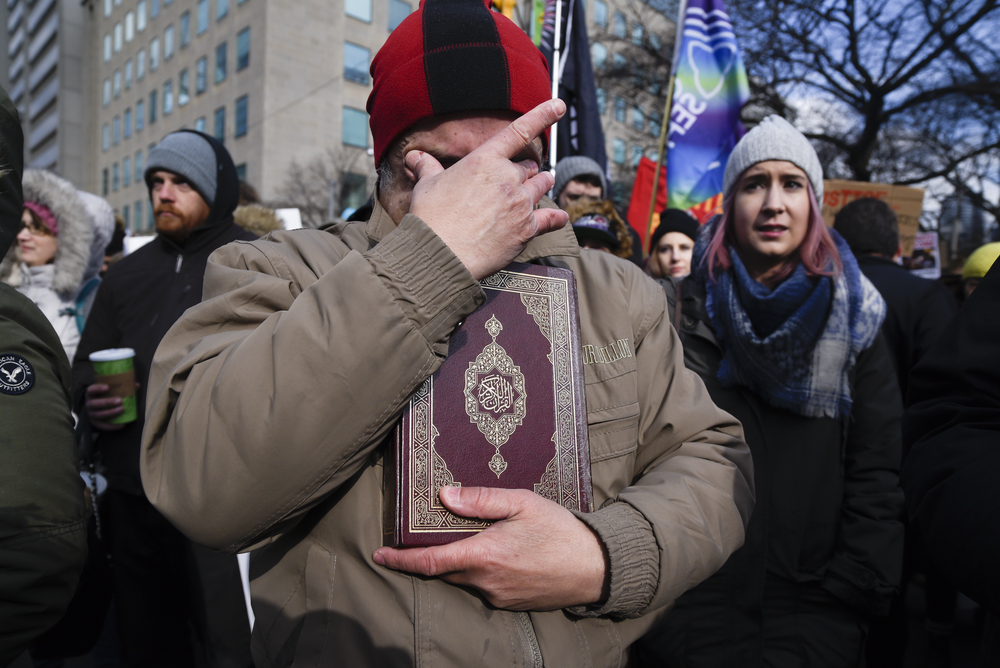 American Muslims are scared and rightfully so. Many are worried about what the future might hold with Trump’s presidency and the increase in public expressions of Islamophobia being spewed right and left. While fear is a valid emotion and is necessary in waking us up out of complacency, it can also lead to negative consequences.

As we read throughout the Quran, all communities of believers are tested with fear-inducing trials. Faced with these tests, successful communities stay united on a shared commitment to God and His religion in spite of the fear. This is often easier said than done. Maintaining commitment to one’s faith and its tenets is not easy in times of trials (fitan) and, oftentimes, fear and anxiety can cloud the decisionmaking process. For Muslims today, anxiety about Islamophobia has the potential to lead our community down a dangerous road. To see how this happens, we only need to refer to the Quran and its account of Bani Israel. In many instances, a strong sense of fear led Bani Israel to directly disobey God’s commandments, which in turn led to ruin (for example, as described in Surah Yunus: “But no one believed Moses, except [some] youths among his people, for fear of Pharaoh and his establishment that they would persecute them.” [10:83]).

We see the same dynamic in religious and ethnic communities today. An eye opening article recently published in The Federalist is provocatively titled “How Liberalism Destroyed the American Jew.” The article describes how Jewish American political and moral choices over the past several generations have resulted in a thorough loss of faith. A Pew study cited in the article asked Jewish American respondents: What does it mean to be Jewish? One might imagine that the answer would have something to do with believing in God, reading the Torah, or following Abraham and Moses. These points, however, do not factor into Jewish identity according to the majority of the Jewish Americans surveyed by Pew whereas “eating traditional Jewish foods” and “having a good sense of humor” do. The two religious features a minority of respondents did recognize as part of their identity was “caring about Israel” and “observing Jewish law,” but the latter was at the bottom of the list. Other common features of their identity Jewish Americans noted include “leading a moral life” and “working for justice/equality,” though these, of course, are not values unique to Judaism.

What does all this have to do with fear? Well, it is important to note that “remembering the Holocaust” is the overall number one component of Jewish identity that seventy-three percent of Jews recognized. Is it a coincidence that this component has to do with fear? Is it a coincidence that remembering the one greatest act of anti-Semitism, i.e., the Holocaust, is what most Jews consider to be what being Jewish is all about?

There is a clear connection between the remembrance of the Holocaust being the number-one feature of Jewish identity and the fact that the rest of the list has little to nothing to do with Judaism as a theology and more to do with cultural practices and general values that are endorsed by the dominant American culture at large. Fear is a potent motivator. Fear is a potent justifier. Virtually anything can be justified if one believes that the alternative is the Holocaust.

In contrast to the Jewish community, however, the majority of the American Muslim community has not had genocide in its history (though segments of the American Muslim community, such as Black, Native, Bosnian, and Palestinian American Muslims, among others, have). Undoubtedly, American Muslims must be vigilant in the face of any threat. At the same time, the community must be aware of how preparing for a threat can have unintended negative consequences on the community’s faith. For example, making exceptions to, bending, and even discarding otherwise well-established religious principles all become possible if one feels, even remotely, that the spectre of genocide looms. And if the possibility of genocide is on the table, then one can justify to oneself doing anything to embed oneself into the status quo, avoid being politically incorrect, avoid sticking out, avoid going against the grain of the dominant culture, all in order to minimize any hostility by society at large. All of the community’s political, social, and cultural decision making is potentially short-circuited by this fear. Of course, none of this is to say that fear is not a perfectly valid, justified emotion. It certainly is and can be used to accomplish great good. But the question is, even when it is justified, how does that fear affect everything else?

Recent sociological and anthropological research examines precisely this question. Numerous studies analyze how “minorities” react in the face of “cultural anxiety” due to widespread bigotry and discrimination. What these studies show is that cultural anxiety is positively correlated with two things: 1) “ethnic essentialism” and 2) “multicultural ideology.” In laymen’s terms, this means that when a minority group feels threatened by the dominant group, they will, first of all, double down on those aspects of their culture and values that they believe to constitute the essence of their group identity. Second, they will increasingly tend to endorse multiculturalism, namely the view that a healthy society should treat all groups within it equally and that the presence of such groups enriches society overall.

These dynamics accurately describe the internal discourse within the American Muslim community since the September 11th attacks. Obviously, Islam is not a culture per se and Muslims are not an ethnicity, but the underlying concepts still apply given that, from a secular perspective, Islam can be considered a set of values, beliefs, and practices, which is what secular academic discourse considers a culture to be for the most part.

That caveat aside, it is beyond dispute that American Muslims have felt a great deal of “cultural anxiety” due to, not only Islamophobic attitudes in American society generally, but also due to hostile government measures that have targeted Muslims and their institutions. The anxiety and fear felt by the Muslim community has led to both essentialism and multiculturalism. Feeling pressure from the dominant American culture has had (what is from an Islamic standpoint) a positive effect of making Muslims more embedded in their Muslim identity, in a word, more “unapologetically Muslim.” At the same time, American Muslims have adopted more of a multicultural attitude as they have become more socially and politically engaged. For example, since 9/11, Muslim involvement in interfaith events, interfaith coalitions, etc., saw a massive increase. Muslim involvement in mainstream political groups and coalitions also jumped. The language of Muslim leaders, imams, and speakers has also been suffuse with expressions of multiculturalism, diversity, relevance, engagement, etc.

While anxiety and fear drive these tendencies of essentialism and multiculturalism, the two are often opposing forces. This is because multiculturalism is characterized by coming together on the basis of shared interests and other commonalities whereas essentialism is characterized by emphasizing differences in order to distinguish one’s own group from the dominant majority. How is this tension resolved?

For American Muslims, the danger is that this tension could result in a deliberate de-emphasis and minimization of those beliefs, values, and practices of Islam that most directly conflict with the dominant culture while overemphasizing specific Muslim cultural markers. This would allow Muslims to maintain some form of a unified, essentialistic identity — even though, primarily, it is cultural rather than religious identity — while also integrating themselves within the larger American milieu and its institutions, which, for the most part, tolerate and even celebrate cultural diversity but not theological, ideological, or ethical diversity. We have seen some signs of this in context of Muslim involvement with certain American political parties in recent years. And again, the example of Jewish Americans proves instructive. As a community, Jewish Americans have a very strong sense of identity and group cohesion, i.e., due to their essentialism, while also being well integrated socially, politically, and culturally, i.e., due to their multiculturalism. In other words, they have resolved the essentialism-multiculturalism divide. But as the previously cited Pew study discovered, the resulting Jewish identity has little to do with the particulars of Judaism as a religion.

Muslim and Atheist at the Same Time

This secularization of Jewish identity also explains the phenomenon of “Jewish atheism.” Not all Jews agree that one can be a Jew without believing in God. Nonetheless, Jewish atheist institutions have become a well established and growing part of the overall Jewish American community. This is not surprising given that half of all Jewish Americans have doubts about God’s existence.

We see similar trends in the Muslim community, as new labels like “ex-Muslim” and “atheist Muslim” have been adopted by people who consider themselves “culturally Muslim” but “theologically atheist.” Neologisms like “atheist Muslim” only make sense if “Muslim,” like “Jew,” is rendered as an ethnic or cultural label, one among many. Of course, the Arabic word “Muslim” itself means “one who submits [to God]” and theologically to be Muslim, in truth, has certain requirements in terms of belief and practice. But these requirements are set by God and communicated through revelation. But from a secular perspective that denies the existence and/or relevance of God, “Muslim” can be deployed in whatever way convention dictates. By this standard, even “Muslim Jew” or “Muslim Christian” should be a linguistic and conceptual possibility.

Ultimately, “cultural anxiety” in the form of Islamophobia will continue to pressure Muslims to secularize and racialize their Muslim identity. As a community, we need to be well aware of this pressure so that we can recognize its signs and strive to resist it. By surrendering ourselves to a crippling fear of anti-Muslim bigotry, we risk losing our very souls. Rather, we need to channel that fear into positive practical and spiritual avenues, namely Islamically-informed activism as well as increased reliance on and fear of God Almighty.

To think of it differently, if there are extreme Islamophobes in the world who want to stamp out Muslims as a religious community, there are two methods to do so. One method would be to deport, intern, or kill Muslims through acts of bigotry or even genocide. The other method would be to create conditions that are conducive to the erosion and dissolution of Muslim faith, such that, eventually, being Muslim has nothing to do with the religious values and norms of Islam. We should ensure that, in our heightened concern for combating the first method, we do not forget to combat the second equally nefarious, equally destructive method as well.