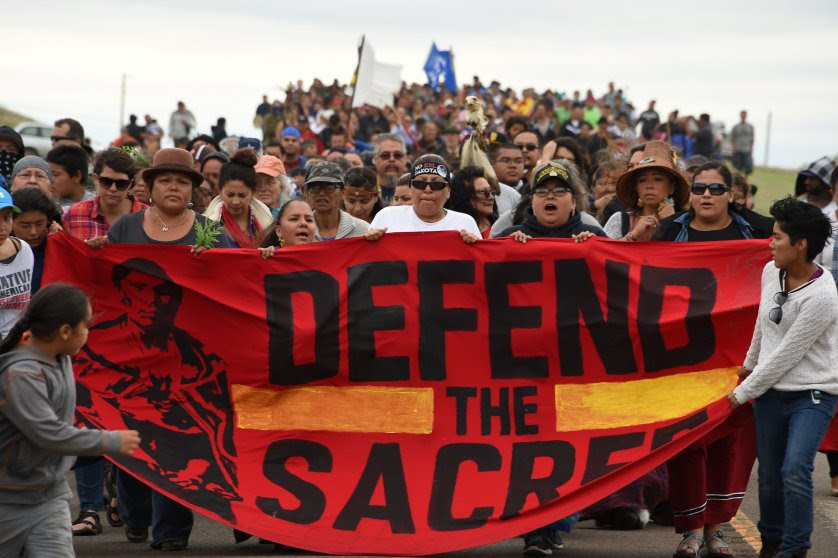 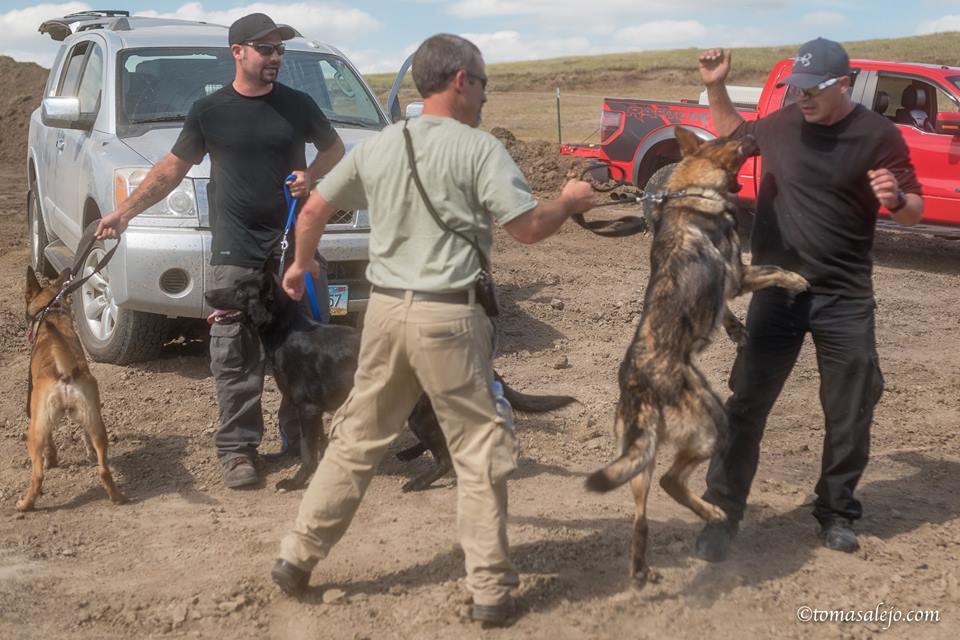 Is this really happening

I watched dogs bite into the flesh of Native Americans while they were maced by private security in North Dakota protesting the most controversial land-grab of our generation. I saw people chain themselves to heavy machinery. I watched Green Party Presidential candidate Jill Stein be arrested for standing in solidarity with them. I watched Journalist Amy Goodman go to jail for documenting it. The scenes at one time were filled with blood curdling screams and wounded members of the opposition being carried away. It was inconveniently reminiscent of 50s era protest where dogs were sent upon African Americans for pushing back against gross inequality. I saw it all through my phone however, and I know millions of people in America saw it too. As a Black Muslim, it troubles me to know that the first people nearly annihilated in the American experiment were experiencing such injustice. My religion puts an indelible weight on interfering with abuses of human rights. Myself and others looked for ways to join the fight. In my naivety, I realized that there was huge swath of Native American Muslims, already well-invested in the fight.

Energy Transfer Partners  is a multibillion dollar natural gas conglomerate hailing from Texas. Their investments and operations range from transportation, storage, and pipeline construction for natural gas. Since 2015 they’ve set their sights on land declared holy by the tribes living in Standing Rock. Four months ago, their brigades of earth-clearing machines descended on the project area.

Approximately 150 million indigenous people were eradicated to make space for the American entrepreneurial project. More than 10 million Africans were enslaved to labor for it. In 2016, the plans to once again extract the earth beneath the feet of the descendants of the aforementioned. Natives are being marched upon, violently.

The youth of Standing Rock refused to be silent though. One group of protesters ran 500 miles just to bring attention to the crisis. After obtaining the attention of a national audience, hundreds flocked to the protest site. Media, Activists, Organizations and concerned Muslims. They were said to have been met by the tribespeople with warmth only cultivated through a rich tradition in compassion. A compassion that Columbus resented when he landed saying “they could be conquered easily, and made servants.”

Native Americans march to a burial ground sacred site that was disturbed by bulldozers building the Dakota Access Pipeline (DAPL), near the encampment where hundreds of people have gathered to join the Standing Rock Sioux Tribe’s protest of the oil pipeline that is slated to cross the Missouri River nearby, September 4, 2016 near Cannon Ball, North Dakota.
Protestors were attacked by dogs and sprayed with an eye and respiratory irritant yesterday when they arrived at the site to protest after learning of the bulldozing work. / AFP PHOTO / Robyn BECKROBYN BECK/AFP/Getty Images

A cause for commitment

Latanya Barlow is a 34-year-old Arizona native and national representative of The Coalition for Indigenous Muslims. Her family is from the Dineh and Chiricahua people. Walking onto the reserve was a scene imbued with nostalgia. Barlow’s tribe is a descendant of the 19th century Native American freedom fighter Geronimo. Such familial bonds earned her added smiles among the youth and elders. Barlow spoke at a hummingbird’s pace of her entrance. “Before we even got to the camp at the reservation we were welcomed by the natives. It felt amazing in an odd way because, you know, I wear hijab and there are times where I’m in public and I can feel menacing eyes on me. To have these strangers take us in that way brings me to tears,” she shared with Muslimmatters.

In camp she and many others who are in the fight are called water protectors, Samaritans who’ve come to battle a financial behemoth for the preservation of a direct water source. “The pipeline they’re digging is only 7 miles away from the river. That river is where a significant amount water comes from for them,” Barlow explains. Energy Transfer’s Dakota Access pipeline project runs over the sacred stone camp which happens to be a tribal burial ground and site of spiritual commemoration. Environmental experts agree that even a small mistake in containment of harmful elements could result of poisoning for decades. Richard Kuprewicz, president of Accufacts Inc. a consulting firm for the oil industry was quoted in an Inside Climate News article saying, “there’s no perfect solution to spotting oil spills. Ideally, companies should combine the best leak detection technology with experienced operators—but even then, some leaks will go undetected.” Barlow remembers being face to face with a people fully aware of those same realities, yet carried  with a sense of unmatched determination. “The people themselves have the best character even while this is going on. An Imam came days ago and said given what they are going through they’ve represented the best of what humanity has to offer,” Barlow argued. 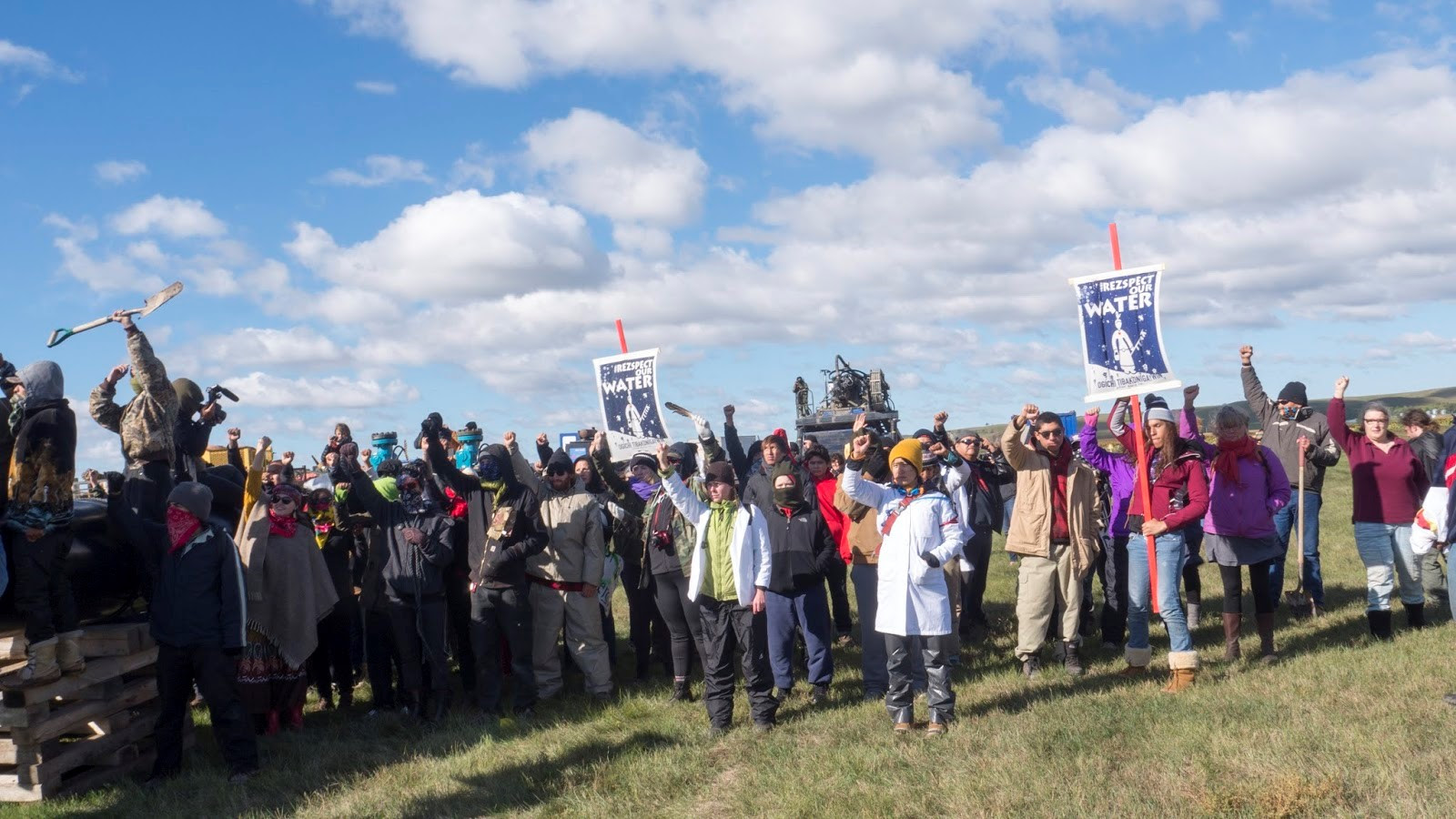 Activists like Barlow have come to terms with what is most feasible to aide the ongoing protests. A brutal Dakota winter is approaching. Known for it’s backbreaking temperatures and unforgiving snowstorms, time is an untrustworthy friend of Standing Rock organizers. Barlow maintains that more than ever action should be taken. “We need people putting pressure on congressional representatives. We need the partners with Energy Transfer to be researched and boycotted. Bail funds are always helpful because protesters are being targeted like never before. And in general funds are needed to survive what winter holds.” Social Justice organization Muslim ARC led one of the first waves of collective contributions to the cause raising over $15,000. Co-Founder of Zaytuna Institute, Imam Zaid Shakir anchored a roundtable with native leaders, symbolically delivering Zamzam water, from a thousands of year old well in Makkah, along with a group of concerned Muslims.

Trouble we know too well

To be a Native right now in the Dakota region is to be perpetually at war. The treaty of 1868 named Fort Laramie promised to “ensure the civilization” of the Lakota, a large tribe with ancestral ties to the region. Basheer Butcher is a member of the Lakota and one of many residents that have witnessed the Energy Partner titan move in on ancient land. To him, the current trespasses across land and contract are only a reminder of age-old abuse. “From the Buffalo being killed off by European settlers to what’s going on now, it’s all a cycle. We’ve been battling for this land for centuries” he heaves.

In four months it’s become clear to Butcher how brutal this new iteration of commerce-centered violence can become and how challenging it is to control public perception. Butcher remarked, “We’re happy social media made sure the world couldn’t just shut the door on us. When you turned on mainstream media they had little to say about how our land is about to be stolen, again. Everyone needs to know that the Missouri is our main source of water. One spill could contaminate the water for 18 million people if it happens. Treaties signed when my great grandparents were alive are being treated like they never were signed.”

Butcher is well aware of what context means to be an indigenous Muslim involved in the Standing Rock struggle; he wants Muslim communities to understand the severity of what is happening. “I see it as community situation more that a Muslim one.That’s why we are backing this protest 150%. Being a Muslim and full blooded Lakota is important. The Water I use to make wudhu (ablution) comes from the Missouri and I was bathing in this water before I became Muslim. Muslim communities need to understand that we need support from them. Islam is about caring for humanity. Human rights abuses are happening now.”

Before getting to a critical mass like this, area tribes negotiated with the birthing American government for land rights, concessions, and most important the procurement of contracting jobs when development was taking place. Companies like Energy Partners are required to enlist Natives for jobs first and foremost. The TERO Tribal Employment Rights Ordinance is charged with managing the contracts with private enterprises. Though the project promises thousands of jobs, in this particular situation, TERO wants no parts of what Energy Partners wants to do. No jobs Butcher says, “are worth destroying a water source for millions.”

A call to dignity

Besides African Americans, no other group of people could be more well acquainted with U.S. sanctioned piracy than the indigenous of America. Standing Rock as it is today appears to be the last straw for this generation of Natives. “The last time the tribes gathered together in this number was 140 years ago for the Battle of Little Bighorn” Butcher says. Within weeks the opposition has turned to a brutal fiasco. Arrests continue, along with protesters enduring savage beatings by private police and targeting of journalists. Support from outside of the reservation is crucial. Support from everyone is imperative.

Imam Zaid Shakir exclaimed after a recent visit to the site, “Let us not forget, however, our native brothers and sisters who are facing the full force of corporate greed and government callousness at the Standing Rock Sioux reservation.” General  Armstrong  Custard’s famous quote when stumbling upon and decimating the lush Sioux lands in the 1800s still presses needles in the hearts today, “There’s gold in them there hills.” Today Energy Partners, with the indifference of the American government, are prying land away from the hands of Natives once again, for Black gold.

The Mighty Signs In The Humble Honey Bee