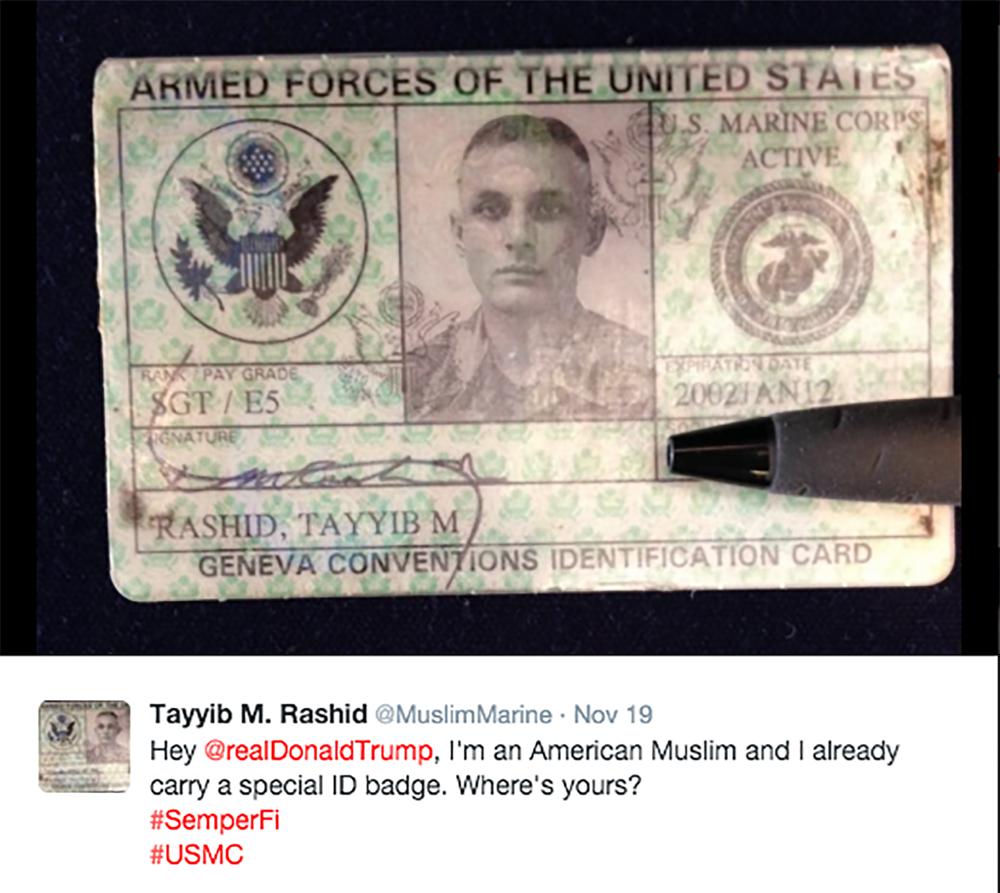 This last Ramadan I had an experience that changed the way I view my status as a Veteran, my beliefs in the Prophet Mohammad

, and society as a whole for the rest of my life.

I had cause to be at the Veteran’s Hospital here in Washington, D.C.; I am a disabled U.S. Navy Veteran and thus I have to be there quite often to have checkups and follow-ups and on and on.

I popped my head inside the chapel door to see where the sound had come from. When I looked inside I saw ten to fifteen people all preparing to pray Jumuah. They looked back at me and someone asked if they could be of assistance. I replied by asking if I had a few minutes to run an errand before they started, I was told that in fact I did. Not wanting to miss Jumuah, I hurried back down to the first floor and then back to the third floor (believe me, it was getting old for me too by this point).

As I entered the hospital chapel, I was offered a seat in the front, part of my disability is that I damaged my knees, so sadly I have to sit when I pray. But they found a bench that I shared with two other gentlemen, my veteran brothers.

During the khutbah, the Imam said “Let us also make dua for our brothers and sisters that are too sick to join us in this room today.” This hit me hard. It was Ramadan; the people that Imam was talking about were my fellow veterans. The thought that someone was alone, ill in bed, and could not make the journey a floor or two just to pray Jumuah broke me. I recalled waking up from surgeries and my cell phone being dead; alone as my family had stepped out to get a bit to eat, I was confused and so alone…and I will be honest…scared.

But here we are in Ramadan, were my brothers and sisters feeling the same?

As we started to pray and make sujud the man in the wheelchair next to me caught my eye. He was an older gentleman, if I had to guess I would say a Veteran from the Vietnam era. When we first sat for the khutbah, I noticed that he had to struggle sitting up in his wheelchair; I also noticed that he was missing both his legs. But, as we made sujud, so did he, masha’Allah.

Here is man that has gone through something, I am not sure what it was…I don’t know if he lost his legs to heath issues or serving the United States in the military, I don’t know what his backstory is…but there he was making sujud – better than I could – in a wheelchair, and thanking Allah

. At that moment I remember a powerful feeling of shame washing over me. Here I was with two bad knees, granted if I got on the floor to do sujud it would take two of my brothers to get me back on my feet; but what about all the times I complain about my pain? What about every time I whine about my day? I was quickly reminded of the quote from Helen Keller “I cried because I had no shoes until I met a man who had no feet.” I was being ungrateful.

As the prayer ended and we said I salaams, I turned to see that others had joined the prayer. Now, it was not just United States Veterans, but as the khutbah started doctors and nurses and staff had joined us; all from different backgrounds, different races, different jobs – but we were all brought together under the common bond of believing in Allah

and the Prophet Mohammad

Inspirational post, right? And now I am all done… you have obviously never read any of my other posts.

In my day job I deal with a lot of anti-Muslim bigotry, more than a normal person should, in my opinion. However, one or two times a year it hits closer to home than normal. This is normally around Memorial Day and Veteran’s Day. From my view point on the Universe I see people yelling at a Muslims – “Go back to where you came from” “The United States don’t need or want your kind” “Islam has no place in the United States” – we have all heard it or seen it. But the part you most likely do not see is Muslims attacking Veterans. I see those. There are those in the Ummah that call us traitors, attack us for our preforming civil and military service to the country we were born and raised in; at least twice I have been called a kaffir, after all how could I serve a country that has political views such as the United States?

I feel that sometimes Muslims and non-Muslims forget the history that Muslims have in serving in the United States Military. As small reminder here is an excerpt from the Huffington Post article “Saluting Muslim American Patriots” –

“Muslims served in the U.S. military under the command of General George Washington, who was Commander in Chief of the Continental Army during the American War for Independence. Rosters of soldiers serving in Washington’s Army lists names like Bampett Muhammad, who fought for the Virginia Line between the years 1775 and 1783. Another one of Washington’s soldiers, Yusuf Ben Ali, was a North African Arab who worked as an aide to General Thomas Sumter of South Carolina. Peter Buckminster, who fought in Boston, is perhaps Washington’s most distinguished Muslim American soldier. Buckminster fired the gun that killed British Major General John Pitcairn at the Battle of Bunker Hill. Years after this famous battle, Peter changed his last name to “Salaam,” the Arabic word meaning “peace.” Peter Salaam later reenlisted in the Continental Army to serve in the Battle of Saratoga and the Battle of Stony Point. If Washington had a problem with Muslims serving in his Army, he would not have allowed Muhammad, Ali and Salaam to represent and serve non-Muslim Americans. By giving these Muslims the honor of serving America, Washington made it clear that a person did not have to be of a certain religion or have a particular ethnic background to be an American patriot.”

In the last few weeks there has a lot of talk about Muslim ID cards, Muslim Databases, and if Muslim Americans are fit to hold office in the United States. We need to stop this kind of talk; it only leads to a very dark place where there is no coming back from. We need to recognize that Muslims have served in the United States at least since the 1770s. We need to not condemn our brothers and sisters that make the choice to serve, and we need to remember that just because someone serves in the United States Military that does not mean that they get to hand pick their instructions; many times they are made by someone, thousands of miles away, sitting in an office.

Remember The Messenger of Allah

said, “Every Muslim has five rights over another Muslim: to return the greetings, to visit the sick, to accompany funeral processions, to accept an invitation, to respond to the sneezer.”