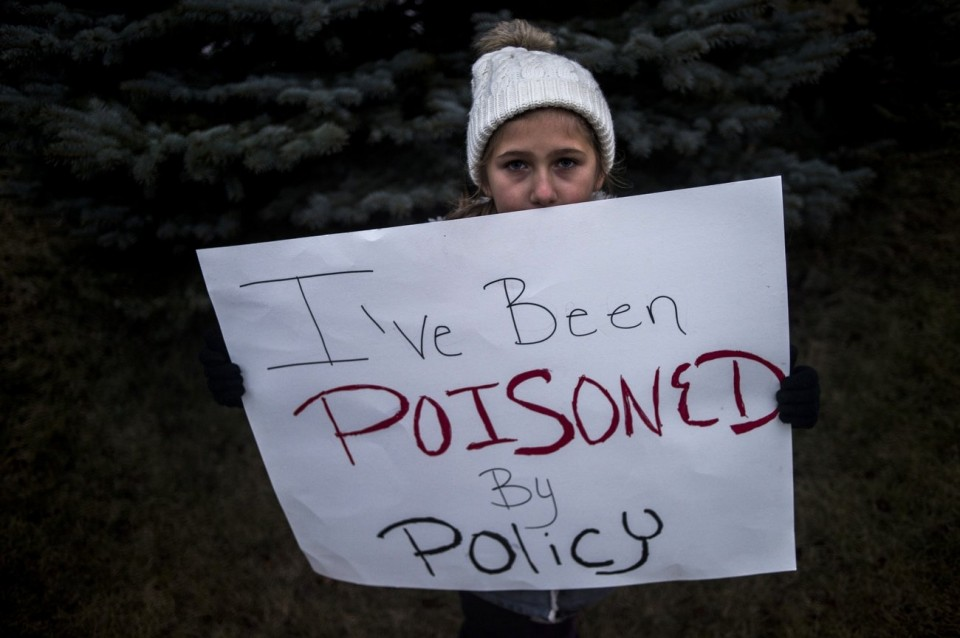 When African Americans use the term “they” it almost always gets misaddressed as an indictment of white society, or even more cryptic, a collection of stoned-faced boogie-men tugging on the levers of the free-world. That catalog of definitions couldn’t be more inaccurate. If the arch enemy of your people could be picked out of a racial lineup, fighting oppression would be elementary, thus rendering our dialogue here useless. But in the name of compounding more thought on to a crisis in Flint, Michigan, I choose to press forward. We are no doubt a nation of systems, mechanizations, and arrangements. So when I speak of “they” in the following series of lamentations and observations understand that the “they” I prosecute, are structures. Before we revert back to our condemnations of the third-world inadequacies in relief from nature’s implosions, we should study the deliberateness of Flint’s water crisis.

Governor Snyder’s man-crafted apocalypse will never be severed from an American biography that begins with smallpox blankets, interludes with Tuskegee experiments and climaxes at Katrina. Detroit Government has pegged itself along a spiraling trail of American biochemical persecution. Somehow the pictures of babies clad in rashes disables my rage rather than charge it. Maybe because this time the blood has spilled from their palms onto their faces and bellies. Indifference is a methodical destroyer. Lead, in the hands of the intentionally indifferent, can be used to cripple generations. The city where I grew up bears testament to this narrative. Data on lead poisoning however, throws meat on the bones of a story too bleak to be true. 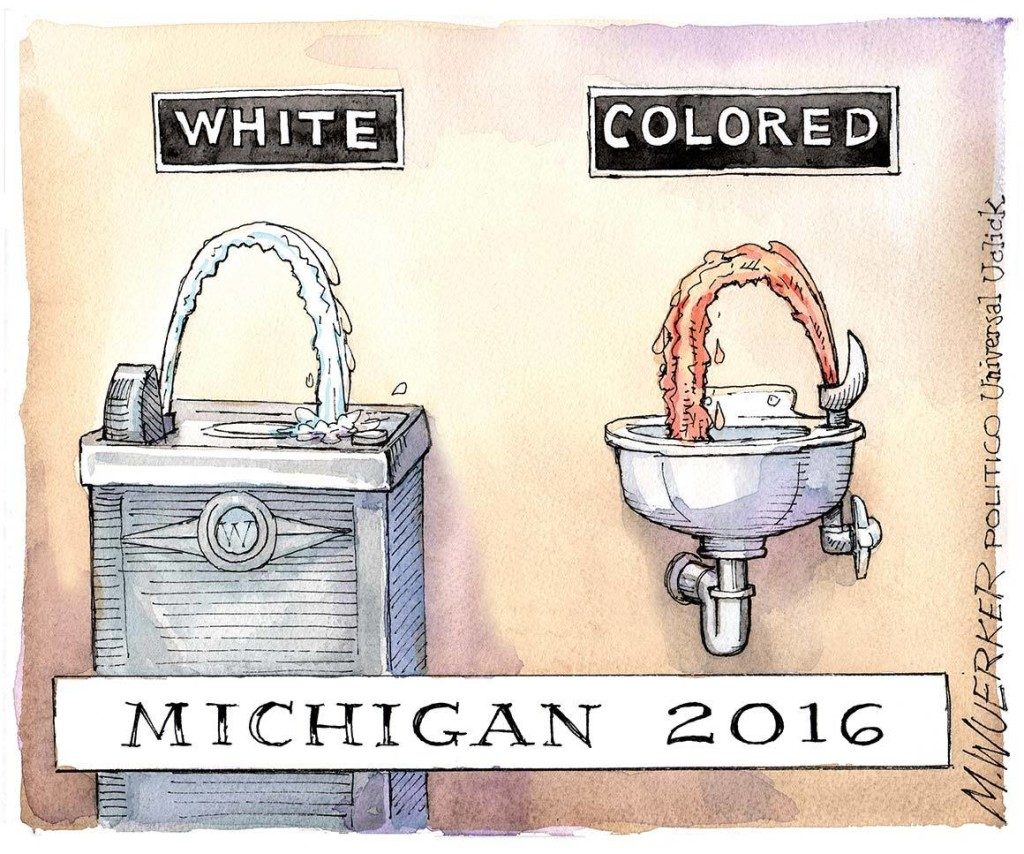 Journalist Anna Maria Barry-Jester captured a snapshot of what was already damaging children in Baltimore, “Despite sharp declines, the city of Baltimore still has nearly three times the national rate of lead poisoning among children, and a look at the data reveals that, like like other health disparities, just a handful of neighborhoods are responsible for almost all of the city’s cases over the last five years.” Skin rashes, abrasions among many outer displays of Flint’s crisis will be fixed given time. But, parents will now have to work through raising children whose abilities to focus in class and control impulses have been stymied by lead adding to every obstacle presented by poverty. Videos of police shootings expose an insidious brand of state sanctioned torture. The cause and effect is seen immediately. Lead damage however, takes time to represent for what it is—slow drip genocide. 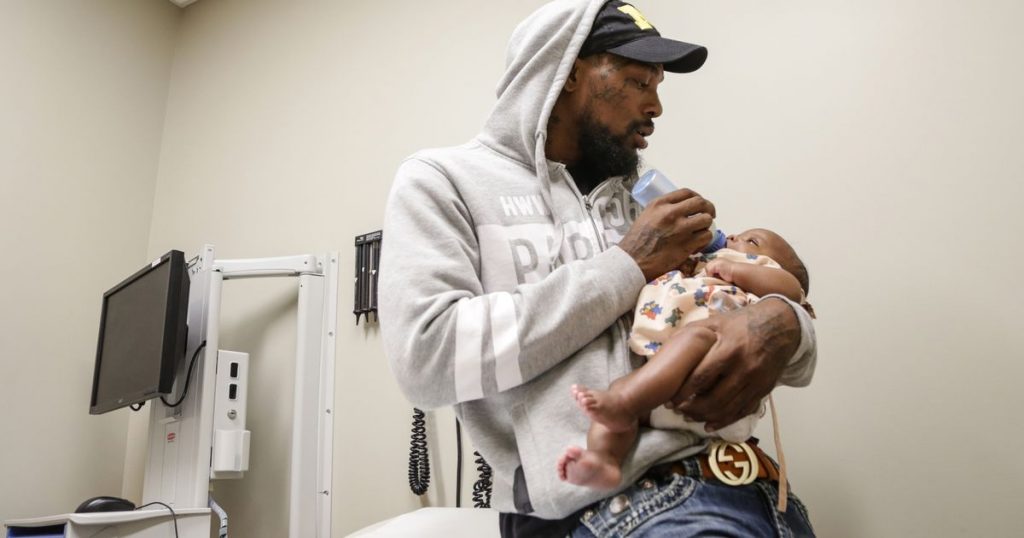 It’s been a year and half since the community of Flint began it’s back and forth of crying out for help and being told that everything would be fine. Mismanagement doesn’t nearly encapsulate the deliberateness of lead levels exceeding state of emergency level by thousands of percentage points. If our country’s memory doesn’t leave us in the dark, then Flint has etched it’s name in stone in a well-known yet understudied cocktail of Black persecution. No matter how obdurate the opposing voices, again Blacks have paid the ultimate price for willful negligence. The devil’s in the details, hell-on-earth in the data. Lead in water is measured in Parts Per Billion (ppb). Federal intervention is mandated at test levels of 15ppb. Water used to bathe infants daily has qualified at 300+ ppb in some homes.

[button color=”white” size=”normal” alignment=”none” rel=”follow” openin=”samewindow” url=”http://www.nytimes.com/2016/01/24/us/when-the-water-turned-brown.html?_r=0″]“The testing of homes in Flint for lead, too, was insufficient and flawed, some experts say. Officials failed to focus on the many homes with lead service lines that were most likely to be tainted, instead looking at wider problems that would have muted the calls of alarm. The city authorities also urged, and state regulators allowed, methods of sampling that experts say had been shown to underestimate lead levels. Residents were advised, for example, to run their water before taking samples, a move that tends to flush out concentrations of lead particles that might have accumulated.”[/button]

We All Lose this Time Around

Despite being a city that is 56 percent Black, poor Whites in Flint have been swept along in the lead hurricane. If anything is to be gleaned from this catastrophe, let it be the colliding plight of African Americans and poor whites who have joined at the hip from time to time during this American saga, in suffering. In by far one the most dubious election cycles ever my cohort of millennials has experienced, what we are seeing in a city of 99,000 economically embattled citizens is tragic, and most necessary to understand the intersections of race/class subjugation. Water, a substance that binds us has now become a commodity that defines our need to examine how governments pit two communities against each other who undoubtedly have contrasting interests. 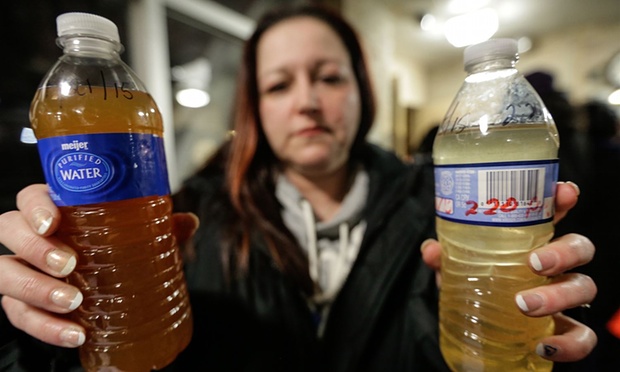 What has happened in Flint will mean irreparable consequences. Wounds will fester long after the news cycle sails from the wind of another disaster that massages the sensation of onlookers. But, let the political unity that comes about from those harmed in Flint, be a beacon for this country. Everyday “they” remind us that Blacks are here alone. Every few seasons, they let poor and working class whites know that, we are in this together. In the next six months, cities will install new political voices responsible for governing this youthful nation. As those of us who are privileged to vote start to decided who we gift these positions, we ought to think about where our interests cross paths. Out of all of the contemporary plight in Michigan, I hope that “they” see a voting block emerge that locks the hands of Black, Brown and White, but for now just water for Flint.

Modesty And The Muslim Athlete