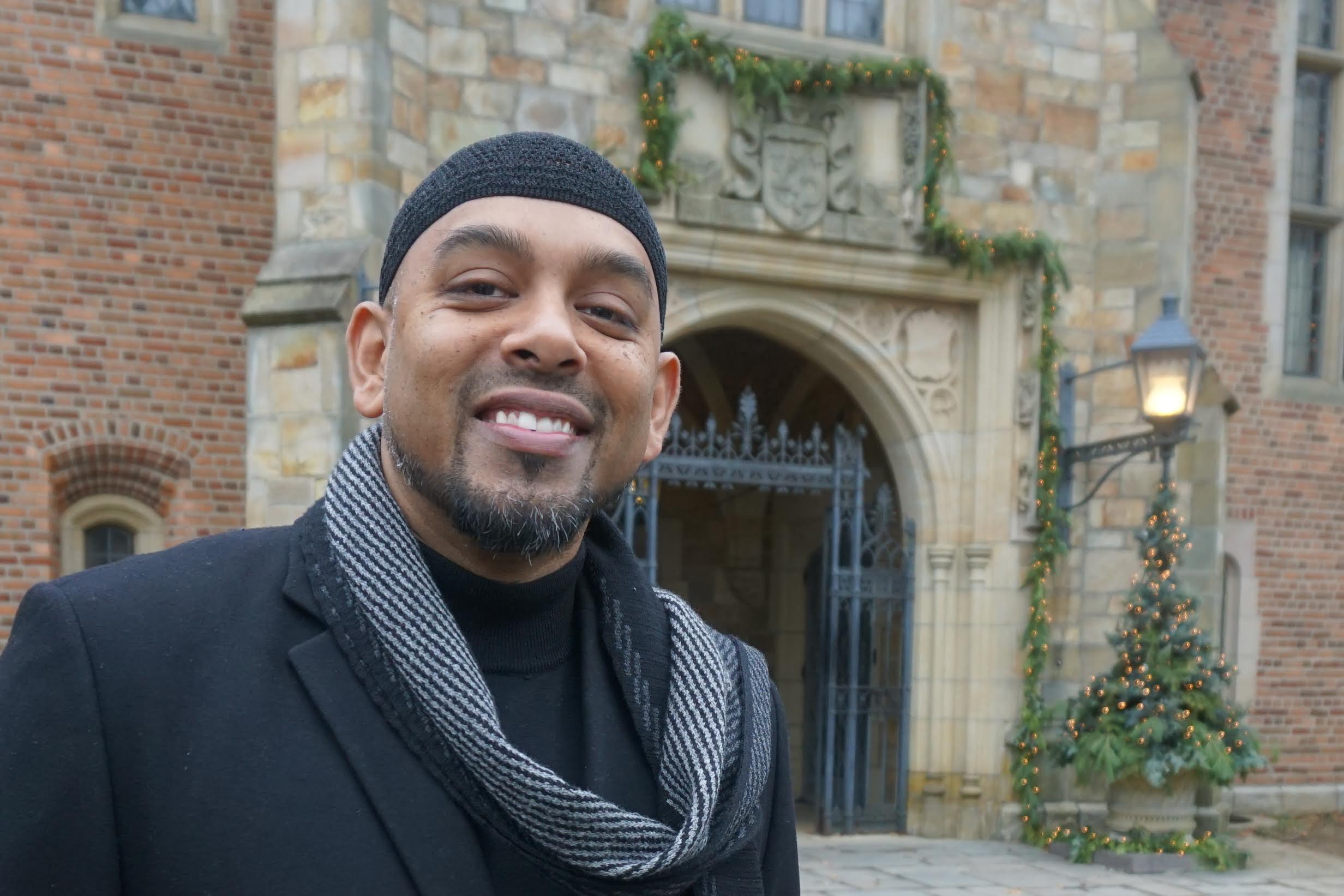 On May 8, 2015, Jameel Syed became the first person in the history of the world to make the call to prayer across all 50 states  in America within a record span of 35 days and reciting the last sermon of the Prophet Muhammad ﷺ at every stop. In his new monthly column, he will share highlights showcasing his historic journey across the United States and reflections.

What Calls the Caller to Prayer

Muhasiba: to take an account of oneself January 2015 was the beginning of another Gregorian new year. A time where the word “Resolution” trends hot— are made, goals are set and targets are placed in hopes of a better life, a better future. Ironically, I found myself moving in the opposite direction. As I stared out of my son’s window into a neighborhood covered in snow searching for the future, I found myself looking into the past, replaying decades of memories and experiences throughout my life. At the end, I faced one question that stood alone: “What have you achieved?” and so, I meditated on this…

Just a few months ago I had turned forty, a major milestone in any person’s life. In those forty years so much had transpired. College degrees, trips around the world, accolades in athletics, the blessings of a beautiful family and the inception of Fluidvisions, my marketing firm that serviced over seven hundred and fifty organizations since its inception in 2004. A lot to be grateful for, a lot to be proud of. “I should write a book,” I thought to myself. A book that case studies the successes and the failures of doing business in the Muslim American space. It would be a tremendous asset for Muslims, non-Muslims, existing and would-be entrepreneurs. I’d forge it from an experiential point of view. And so I started writing “The 99 Scenarios”.

Just as I began to get comfortable with this line of thinking, midway into the book, I had writer’s block! In the process of answering the question of achievement, I was  blindsided with a heavier question: “Are you successful?” A straight punch to the gut and I had the wind knocked right out of me.

As defined by whom? Your whole life, people have been dangling carrots in front of you to try and bring perspective to theword: “success”. Society: the media, government, universities, teachers, employers, clients, peers, parents, spouses and even your own bank balance formulate customized soundbites to build their own paradigms of success, impressed upon your mind and in your heart. They make you hold yourself hostage. But in that moment of clarity, I knew better… Success can only be measured by one standard and there is only one judge who will hold the balance. He is Allah

Doubt and fear filled my soul!

I thought of my late father, Dr. Salam A. Syed, who was an emeritus professor of Microbiology at the University of Michigan. He was respected by his peers and loved by his students. As a witness from his household, I will testify to the fact that he devoted every minute of his free time towards the recitation of the Qur’an, sending praise upon the Prophet ﷺ and making da’wah in the prisons. He never preached to us about the Sunnah, but we would witness it in his daily actions. I have never seen him miss a prayer in my lifetime. In November of 2003, he went to the masjid with the intention to attend the Taraweeh prayer in Ramadan. He prayed Isha and the Sunnah.  In the second Rakat, in the second sajdah, he passed away. When I think of the word success, this man and this incident comes to mind.

I then looked to my son, Jibril. A twelve-year-old student of Hifdh who is the first one to wake up in my household, pray Tahajjud and indulge himself in the Qur’an. A boy who is dedicating his youth towards activities that would please his Creator, while maintaining honor roll status and breaking school records in track and field in the process. I think to myself, this is success. This world and that, Deen and Duniya, success! The two  men closest to me in my life had made a case for themselves, “but what about me?” I thought to myself. “What am I bringing to the table?”

I sat with myself for sometime and thought: “How could I compete with that?”. I felt like a failure, helpless and Miskeen…. I didn’t want to write any more. I closed my laptop and slowly walked away from the window, deeply dejected and filled with sorrow.

I sought an audience with one of my teachers and explained everything to him as I choked back my tears. He quietly listened and when I finished, he grabbed both of my hands and said: “Do not be sad, for this is not the etiquette a believer should have with His Lord. Be optimistic and have hope in Him”. Are you not a Muaddhin? Shall I tell you what the Prophet ﷺ said about the Muaddhin:

“The muaddhins will have the longest necks of the people on the Day of Resurrection.”

“Allah and His angels send blessings upon the front row, and the Muaddhin is forgiven as far as his voice reaches, and whatever hears him, animate or inanimate, confirms what he says, and he will have a reward like that of those who pray with him.”

In a much stronger voice, full of conviction, squeezing my hands tighter with a stare of steel, he said “Shall I tell you what the Prophetﷺ said about the Muaddhin?”

The Prophet ﷺ said: “Bilal, tell me which act you did at the time of the morning prayer for which you hope to receive good reward, for I heard during the night the sound of your footsteps before me in Paradise…”

He then said to me, go and be like your master Bilal

and raise the Adhan. “Compete, and claim your rewards.” Sitting in the company of my teacher and listening to the words of hope relayed by the Prophet ﷺ brought forth an adrenaline rush. My heart was filled with confidence and purpose. The executive in me took over. I had found something to be resolute about. I was going to capture the attention of my Creator by executing that one action of sincerity that would stand exceptional with the hope that it would weigh heavy on my scales on the day of judgment and that it would bring an audience with the one who is most Beloved ﷺ.

In that moment of inspiration, I understood that I wasn’t going to be just another muaddhin, I was going to be “The Muaddhin”. I told myself that I would exhaust all of my resources in raising the adhan and praising the Prophet ﷺ in the manner in which He deserves.

I could never have predicted that the attempt at answering such heavy questions would lead me into a historical journey across the United States and beyond. My mission now is to help people tell their stories, to amplify the voice of the adhan to the highest degree and to champion the “Original Constitution of Social Justice” as composed by the greatest ambassador of goodwill the world has ever known: The Chief of all Prophets, Mercy to the worlds, Muhammad ﷺ. 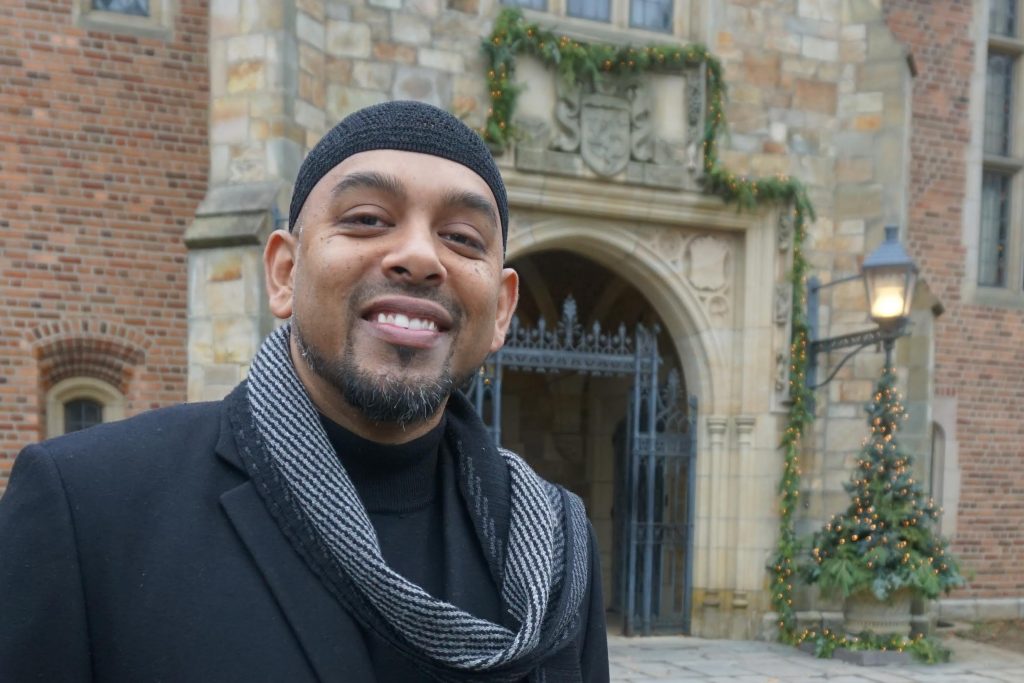 Jameel A. Syed, (“The Muaddhin”) is a Muaddhin, author, traveler, national speaker and marketing executive based in Auburn Hills, Michigan. In 2015, Syed became the 1st person in the history of the world to make the call to prayer across all 50 states  in America within a record span of 35 days while reciting the last sermon of the Prophet Muhammad ﷺ. Jameel attained his education from The University of Michigan School of Kinesiology and Ross School of Business. In 2004, he founded the Fluidvisions Marketing firm, specializing in strategy consulting, building brand equity and launching new ventures.Currently he is traveling across the United States and abroad engaged in the “50 Mosque Man Tour” –  A visual and interactive keynote presentation of his historic journey across America. To learn more about his tour or to book a speaking engagement, please send an email at: info@jameelsyed.com. You can also follow him on Instagram & Twitter: @TheMuaddhin. Official Hashtags – #JameelSyed #TheMuaddhin #50MosqueMan