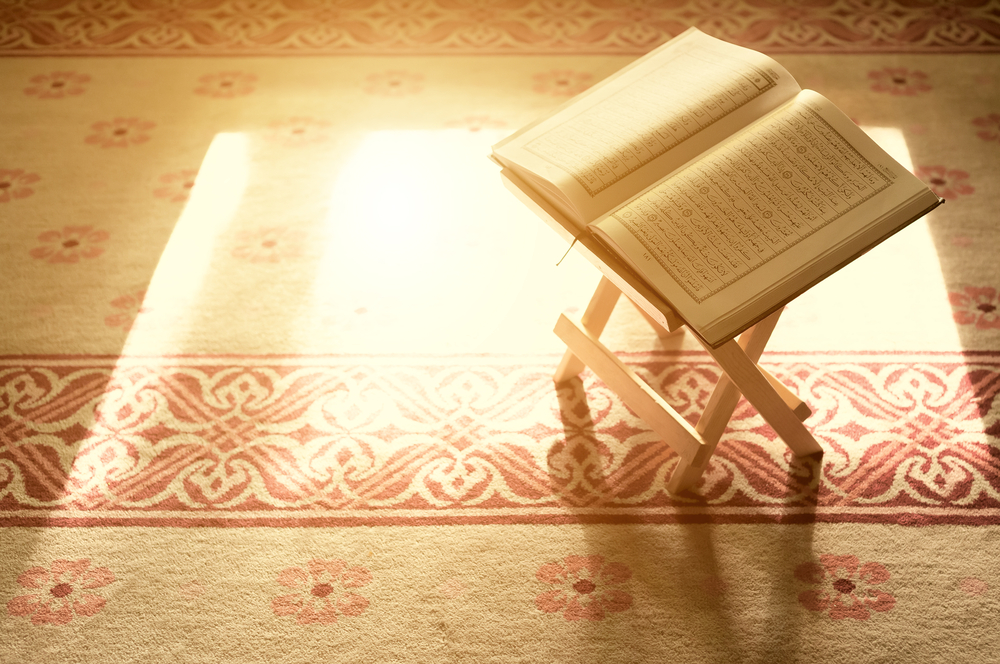 This week, the verses are flying.

“No, it teaches peace! See what came before that one? See these other verses?”

So many Internet experts in online comments insist they know what the Quran is, because someone told them, and they read a few selected bits and pieces.

So many of us Muslims get our knowledge secondhand too.

Sohaib Saeed has something to offer, nine years in the making, that just maybe was waiting for the exact right time to come to fruition. Just maybe, a little bit of salve for these terrible wounds of modern times. This fall, Saeed’s organization Quranica “Soloman

and the Queen,” a film that lets the Qur’an speak for itself.

and the Queen” showcases the incredible vocal beauty of the Qur’an, interspersing it with just a little bit of commentary to help listeners understand. It’s meant for everyone — Muslims who already love listening to the Qur’an. Muslims who need to hear more of its soothing beauty, but maybe aren’t ready to listen to a long stretch of solid recitation. And people who aren’t Muslim but want to learn about the Qur’an.

“Many people just don’t know what kind of book the Qur’an is, what kind of experience it offers, what role it has in our lives,” Saeed said. “They just understand that there’s scripture which is some number of centuries old, and for some reason Muslims have this dogmatic connection with it. They don’t realize the Qur’an remains a life force in Muslim religious life.

“There are so many ways that the Qur’an gives us life, gives us hope, gives us energy, gives us motivation to do good deeds.”

Nine Years in the Making

A decade ago, Saeed, of Scotland, was thinking of how to bring people a platform to enjoy the beauty of the Qur’an. He founded Quranica to do just that, planning public performances highlighting recitation of the Quran and discussion of its meaning.

Saeed found a talented up-and-coming Egyptian reciter he wanted to invite, Sh. Hajjaj Ramadan al-Hindawi. It wasn’t easy to get him there, as masjid-goers in England didn’t want to share him, but finally Hindawi came to Edinburgh’s Central Mosque to recite during a weekend of Quranica events. Saeed asked Hindawi to recite certain short passages that would be easy to discuss, so the audience could leave with a new piece of understanding.

Then, that Sunday, Quranica organizers decided to do something different. Saeed said, “We let him do what he does best.” They told the Qari: Sit here in the masjid and recite whatever you want, however you want to.

“I can only describe it as magical,” Saeed said.

Hindawi recited from Surah al-Naml, the story of Prophets David and Sulayman and the Queen of Sheba, with the indescribable artistry of the Quran’s words in his voice and the deep feelings of the story on his face. Saeed and the audience listened — and watched, mesmerized by the beauty. At least one visitor of a different faith stood for the entire hour, just listening to the Arabic and watching the reciter.

“I found just watching him recite — I get so much from just seeing the face of a reciter,” Saeed said. “There’s something in seeing how he’s reacting and interacting with what he’s reciting.”

Saeed plunked a borrowed camera on a chair and let it record. It was Asr time, and the light fell on the Qari in a golden spotlight, moving over his face and then passing by as evening fell.

“From an editing perspective later, this was an absolute nightmare, but on that day, it was magical.”

Saeed wanted to share the experience, but he wanted a special treatment for it. He put his recording away and worked on other projects, but it stayed in the back of his mind for almost a decade.

Early this year, Saeed was discussing project ideas with a talented cinematographer named Azam Khan. “He was suggesting projects, and I said look, there’s something I’ve been sitting on for awhile.”

Saeed wanted to not only edit the footage, but also to intersperse commentary to give the audience a mental breather and help them understand what they were reading in the subtitles. They would shoot the footage at scenic locations throughout Scotland, choosing sites that matched the feel of each section of verses.

“This particular story of Sulayman

and the Queen of Sheba has so many enigmatic and marvelous events, and it contains so many elements of beauty,” Saeed said. “It’s that beauty I wanted people to have a chance to connect with. Not necessarily promoting the meaning of this story as being especially relevant to our time, but I think it gives a good idea of thing things that are in the Quran that maybe people never imagined are there.”

One challenge was going to be a technical one: Integrating two types of footage. The main footage and the audio came from the borrowed camera Saeed put on a chair back in 2006. He also found a second recording shot by an audience member holding his camera in his hands. “He had just bought it that day so he wasn’t used to it and he hadn’t got a tripod yet.”

It was real, authentic original footage of a Qari sitting cross-legged on a box at the masjid. And they had to mix that with well-planned, professionally shot commentary at some of Scotland’s most breathtaking sites.

The other challenge was that Saeed needed to really understand this story so he could help present and explain it. He drew on his studies in tafseer and read all the different commentaries he could find.

“There are so many things that are ambiguous, and there’s a beauty to that, but that was a challenge as a filmmaker,” he said. “At some times, I made a choice in how to translate or explain something, but at other times I felt I didn’t have a right to prefer one view or another. For example, who managed to bring the throne of Sheba to the court of Sulayman? I mentioned all the views because all of them are equally dazzling possibilities.”

He wrestled with many questions in this story. “Overriding questions — what was Suleyman

trying to do, what was the goal of the mission? What was going on with the Queen of Sheeba, and at what point did she decide to submit to Allah? And why are certain things mentioned in the story, like why did it mention her lifting up her skirts and uncovering her shins?”

The best explanation he found for that was that when she did that, she was made to look like a villager in front of her own court and Suleyman’s

subjects. “And that knocked her down enough pegs that she was ready to say that she submitted — with Suleyman

— to the Lord of the Worlds. Still maintaining her strength.”

Saeed kept the commentary to a minimum. He also tried hard not to impose his own preferences on this story, but simply to present it the way the Quran does, with all of the different threads of meaning that a listener might miss one time but discover another time.

“A lot of the time we’re saying, ‘The Qur’an isn’t that bad — look, it’s got nice things in it. Let me prove to you that it agrees with everything you believe.’ Rather than saying that, [in this project] we’re saying, ‘This is what the Qur’an is saying.’ And I’m sure that in many ways, this is stuff that you have not heard before.

“And I’m sure that a lot of it is sorely needed in our times.”

Saeed said that while viewers have given positive feedback, some are confused as to how it fits in with film genres. It’s not documentary. It’s not solid recitation. It’s not a story told with verses to back it up. “My commentary in this film would not work as a standalone thing,” he said, “so this is what I meant when I called it a Quranic storytelling film, as in the Qur’an is telling you the story.”

The more he worked on this project, the more he loved the verses he was studying and presenting.

“I got a chance to build up such a relationship with these verses,” he said. “The more I listened to this recitation, the more I became in love with it and charmed by it.”

This post was edited by Lina Hashem from an audio transcript between Sohaib Saeed and B.C. Dodge

Ouroboros, Part 12 – Lord of the Helpless