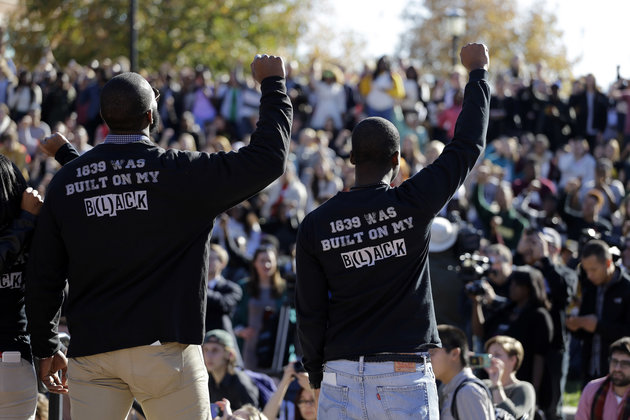 Veryl Pow and Khaled A. Beydoun

This past Monday, the fiction that student protests are merely demonstrative and ineffectual was ruptured when student protestors at the University of Missouri (MU) achieved a rare victory with the resignation of President Tim Wolfe, one of the protestors’ top demands.  Hours later, Chancellor R. Bowen Loftin also stepped down.

The MU protests began shortly after a Facebook post back on September 12, when Payton Head, the president of the Missouri Students Association, described an incident the day before about continuously being called a “N—-” while walking through campus.  It took a full six days after the incident before the Chancellor issued a response.

Through October, while the protests were underway, frustration with on-campus racism and the lack of administrative response swelled during those days, culminating with solidarity from black student-athletes on the Missouri football team. That solidarity proved to be the tipping point, or what pioneering law scholar Derrick Bell’s calls, “Interest Convergence,” forcing the University to take action in order to secure its financial interests.

While many have critiqued the University’s response to the protests as a strategy of self-interest cloaked by progressive action, the Mizzou protests should not be reduced to what the University administration did or did not do. The protests take place within the broader contexts of the Black Lives Matter movement and the erosion of affirmative action, which together, isolate rapidly declining Black student communities on college campuses and enhance their vulnerability to racism.

From the vantage point of non-Black people of color, the protests further reveal the importance of solidarity against anti-Black racism both for its own sake and for the elimination of other forms of racism and bigotry in America.

On a campus where only eight percent of the nearly 28,000 undergraduates are black, simply mobilizing the black student population would not have achieved the numerical pressure necessary to remove President Wolfe.  However, the continuity and perseverance of the protests publicly exposed the prevalence of bigotry and the resulting institutional hostility towards racial justice.  This exposure, in turn, generated the broad support and the threat of economic disruption needed to remove Wolfe from office.

The protests united preexisting campus struggles for social justice.  For example, the Coalition of Graduate Workers (CGW) at MU, which had been organizing for months for union recognition, realized that the same administration responsible for paying graduate workers less than the national average was also responsible for maintaining an institutionally racist environment.  Connor Lewis, a CGW co-chair, stated that what “led to Wolfe’s and Loftin’s resignations is really the collective action from a number of engaged constituencies on campus that realized that they had kind of a common struggle outside of just narrow sectional interests.”

The frequency and expansion of the protests into a broader movement provided security in numbers for traditionally apolitical entities dependent on the university for scholarships and paychecks – here, the football team and faculty – to leverage their labor, in the form of a strike, in pushing for institutional change.  In so doing, these student-athletes and faculty members exposed the dependency of the university on their labor.  Many faculty members declared that they would not teach on November 9 and 10 to walk out in support for racial justice.

Thirty black student-athletes similarly announced that they would not resume football activities so long as Wolfe remained president.  Mizzou’s football team would have cost the university $1 million alone to forfeit their next game.  Like the graduate workers, the athletes of color recognized their personal stake in the protests, stating that “Injustice Anywhere is a threat to Justice Everywhere . . . WE ARE UNITED!!!!!”  That students were willing to risk their enrollment and workers were willing to risk their careers is a significant milestone for the contemporary anti-racist movement.

While the football team’s decision to boycott the November 14th game against BYU was the catalyst that spurred immediate administrative action, the financial interests of the University and the interrelated power of these football players should not minimize the efforts of other segments of the Mizzou movement, particularly the black student leaders who initiated it, and the allies who pushed it forward.

If black student leaders didn’t initiate and spearhead the Mizzou movement, the subsequent action taken by the football team would not have been possible.

Members of the black student protest group, Concerned Student 1950, raise their arms while addressing a crowd following the announcement University of Missouri System President Tim Wolfe would resign Monday, Nov. 9, 2015, at the University of Missouri in Columbia, Mo. Wolfe resigned Monday with the football team and others on campus in open revolt over his handling of racial tensions at the school. (AP Photo/Jeff Roberson)

Unquestionably, the Black Lives Matter movement is a salient lifeline of the modern anti-racism movement in America, and more broadly, a vital source for other struggles against bigotry that emanate from it or influenced by it.  The success of the Mizzou protests has opened the door to a reassessment of the broader anti-racist movement, both in terms of how it’s framed and who can participate.  Thus far, the movement has largely been framed as a response to police violence against black males and led by black youth.

On one hand, the Mizzou protests changed the framing by revealing the systemic nature of racial injustice and the fluidity of how people of color experience racial injustice from institution to institution, not just from the police.  On the other hand, the protests expanded the possibility of participation by revealing the necessity to organize against all forms of racial oppression and to do so by leveraging collective power from strategic alliances based on commonalities.

For non-Black people of color specifically, the Mizzou protests and the broader Black Lives Matter Movement have been instructive in two principal ways. First, they emphasize that contesting and combatting anti-Black racism is more than just part and parcel of fighting racism at large – but a prerequisite step for advancing the struggle to end a system of racial oppression.

Second, as a precedent for contesting other forms of racism and bigotry, the commitment to dismantle anti-Black racism breeds the coalitions necessary to erode xenophobia, anti-Muslim bigotry, anti-Asian American sentiment, and other forms of racism. In addition to principle, coalition building across racial lines (within communities of color) is a political imperative because numbers, sustained solidarity, and power – not benevolence for the well-being of marginalized people by those in positions of power – will deliver the progressive strides demanded.

For non-Black people of color, these are some important lessons we should take away from the Mizzou Movement.

Veryl Pow is a community organizer in Los Angeles and a second-year law student at UCLA engaged in Critical Race Theory scholarship.  He currently organizes with community members of South Central around the intersection of racial profiling, traffic court debt, and incarceration.  As a scholar, he believes that theory should be informed by grassroots experiences on the ground, and consequently focuses his writing on social movements, rebellious lawyering, and racial justice issues.  Veryl maintains his personal blog at http://smashingthemodelminority.blogspot.com/.

Khaled A. Beydoun is an Assistant Professor of Law at the Barry University School of Law in Orlando, Florida. He previously served on the UCLA School of Law faculty, and currently serves as affiliated faculty with the UC-Berkeley Islamophobia Research & Documentation Project. Professor Beydoun has extensive experience as an attorney, working within the realm of civil rights, criminal defense, and international law practice. A Critical Race Theory scholar, Professor Beydoun examines discrimination from a legal, race based and intersectional perspective. His scholarship examines the racial construction of Arab and Muslim American identity, criminal and national security policing, affirmative action, and the intersection of race, religion and citizenship. His work has been featured in top law journals, including the Michigan Law Review, the Harvard Journal of Race & Ethnicity, the Stanford Journal of Civil Rights & Civil Liberties, the Howard Law Journal, and more. A native of Detroit, Professor Beydoun earned his law degree from the UCLA School of Law, and his BA from the University of Michigan. His also holds a Master’s Degree from the University of Toronto. A commentator on pressing issues, Professor Beydoun contributes regularly to Al-Jazeera English, serves as an expert consultant for the US Census, and the African American Policy Forum.
Share129
Tweet
WhatsApp
Reddit
129 Shares

Ambassadors Of Good Will: On Manners and Marketing

Depression & Muslims: 7 Stats That Will Shock You